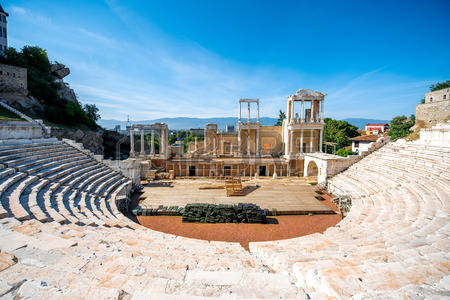 By the time my plane landed at the small airport in Plovdiv, Bulgaria, back in June, I had begun to lose interest in the critiques of abstract German philosophy I held in my hands. Grass and an orange sky extended in all directions. I was greeted by my host; a bald man who smiled profusely — often a sign of insincerity in this part of Europe. As I rode toward my apartment, I saw several broken-down cars on the road. I practiced my skill in reading Cyrillic text on the road signs and billboards. The man could speak just enough English to communicate. He brought me to my apartment, the sleek inside of which far exceeded my expectations. The outside hallway outside however was covered in scratches and graffiti. An old noisy elevator brought me up and down thirteen floors.

I had not eaten since breakfast, so I walked out around midnight to find something. I walked down the street towards the city center and heard people talking, laughing and drinking in bars and restaurants. Each of these places was an oasis in an otherwise dreary, sad, and poorly maintained environment. But my impression of the people in their relaxed state was one of sinfulness rather than merriment, as though no one were up to any good. Cars didn’t bother to stop for me when I crossed the street. Scowling burly men passed me, often walking into well-stocked liquor stores. Bright neon lights advertised drinking and gambling. I studied the faces I saw and compared them to my own: “how starkly do I stand out as a naïve, privileged middle-class American guy walking around the second world at night?” I did not find anything suitable to eat, and ended up eating the chocolates that I found in the kitchen when I returned.

The next day I walked to the city center, where I would meet the people who suggested I come to Bulgaria in the first place. The city center is the nicer part of Plovdiv, with a beige-colored walkway, trees, no vehicles, and a small theater in the center repurposed from the original ancient Greek one. I corresponded with one of them using borrowed Wi-Fi. I leaned against a fence while an old man played an accordion a few meters away. Behind the fence were excavated columns. I soon met my new acquaintance; a tall, young stout guy in a red shirt. This was Vulgar Bulgar. He told me he was visiting from another part of the country. We talked for several minutes about being TRS fans and about Bulgaria. Soon two others arrived: Morana and Balkanicus. Each of them speaks fluent English. The four of us walked through the city center toward a bar that played heavy metal. Soon, three more joined us. Everyone was young; I don’t think anyone was older than twenty-four. It soon became clear to me that these others were not as familiar with the American alt-right, and that being a nationalist here in the former Communist bloc was not considered nearly as transgressive as in the US. We talked for hours, and I was impressed with the extent of the historical memory of these Bulgarians.

At some point Morana, whom I think of as Plovdiv’s local identitarian propaganda minister, was placing stickers on various walls. One of the stickers had no text, and depicted a cartoon image of Ku Klux Klan members by a burning cross.  A tall, hideous man saw us, stopped, and said in English: “You….racist?” His head was hunched awkwardly, and he was clearly incensed. The rest of the exchange was in Bulgarian, but apparently the response went as follows:

“Do you know what I do to racists?”

Angry glaring became an exaggerated storming off, followed by more angry glaring.
Two teenage boys who stood nearby told the man to leave us alone.

The pattern of meeting in the late afternoon, then going somewhere to drink continued for several days in a row. It was not rare to see a man walking down the street in broad daylight holding a partially empty bottle of liquor. I learned lots of history from Balkanicus. Morana complained about gypsies. Vulgar Bulgar made jokes. A coworker of Morana’s gifted me brass knuckles. We found some old school notes from the Soviet era in some old books. I’ve experienced worse times than those.

One evening we walked to an area where the sunset turned the sky orange. It was on a hill with Greek ruins protruding from the uneven ground. A large statue dedicated to the Soviet soldier stood on a hill in the distance. Ugly Soviet-era buildings filled the space between the ancient soil under my feet and the sinking sun on the horizon. We came across a group of foreign students who were also visiting this lookout spot. We asked them if they would take a photo of us, with the sunset in the background. For the meme value, we positioned ourselves in front of a stone which had been spray-painted with a swastika. The peppy British girl who took the photo didn’t let on that anything was abnormal.

On the weekend, I joined Morana and Balkanicus on the train to Sofia. Our plan was to meet up with National Resistance and support their protest of the Sofia Gay Pride parade. The train was old and slow, but as with pretty much everything else in Bulgaria, cheap. We listened to German marching songs and recent Alt-Right parody songs on the way. After about two hours we arrived and were picked up by a friend, who brought us to the National Resistance headquarters. We walked with them to the subway. As everyone passed through, I realized I did not have a ticket. I moved to buy one, but I was told not to worry, and to just sneak through. I saw an employee behind her desk and hesitated, but ended up forgoing the ticket. Police joined us when we exited the train, and stuck with the group. Outside, police were everywhere, determined to prevent violence (though I was later told they weren’t entirely successful).

Police checked our bags for weapons before letting us join the protest. Groups of NR guys held three banners, reminding me of footage I had seen of Nordic Youth events. Almost everyone was wearing black. There was an angry energy circulating in the square-shaped crowd. Police stood by imposingly, but they also appeared relaxed. Speeches were made, and judging by Balkanicus’ translations they were inspiring. We could hear the celebration of the Pride parade from the other side of a large statue, but we never saw them. At one point the leader of NR, Blagovost Asenov, addressed the cops: “Remember, it could be your children over there.” How sad it is in the West than one cannot assume that a police officer would not be happy to see his offspring celebrating the collapse of traditional marriage, religion, and culture. Twice, the crowd chanted Да запазим децата от разврата: “Keep children from perversion.”

Later, we returned to the National Resistance clubhouse, followed by a walk to a nearby shop to buy food. Bulgarians apparently eat red meat constantly. I talked a bit with Asenov, who expressed his disappointment in the day’s turnout. He had hoped to attract two thousand, but the crowd only numbered about two hundred. From what I gathered this was due to issues getting the message out to everyone in time. I also talked a bit with a guy who asked for suggestions on TV shows to watch to improve his English.

At the clubhouse, pictures of Bulgarian national leaders were displayed beside German National Socialists. There was a small bar, and an area in the back for sparring. We sat and ate outside, where a girl gave me a pendant with one of several Slavic symbols that signify particular virtuous qualities. An old man to my right gave me his chain which allowed me to wear the pendant. We returned to Plovdiv late that night. I took a taxi home every night. It was strongly suggested that this would be wiser than walking.

Though I didn’t get the impression that Bulgarians in general speak much English, most of the ones I met were fluent, as well as educated. Other young people I met through Morana and Balkanicus included a skinny high school student who is enthusiastic about cryptocurrencies, and a short, muscular guy who talked at length about computer science.

Gypsies were rampant in the city. I tried speaking with one, but he did his best to ignore me. They stick together. Apparently many of them made their home under a bridge near my apartment, though I didn’t go near it. I saw a handful of blacks, who were probably students. A large mosque stands in the city center, and during evening prayer one can glance through the doorway to see the prostrated veiled women.

The faces of most of the people took getting used to. This was an important lesson in ethnonationalism: Southeastern Europe would not mix well with Sweden, England or France. It isn’t clear to me that expelling the Gypsies and other nonwhite populations from Bulgaria would drastically reduce poverty the way it would in the US or Western Europe. Bulgarians are a different kind of people, with a different kind of multicultural problem. Their birth rate is low, not unlike Germany or Korea. The Gypsy population meanwhile is booming.

On my last full day we visited a local Orthodox church. We put the cans of beer we had been drinking on the ground outside, entered, and then walked silently around the inside. I immediately took notice of the contrast between the irreverent humor my friends and I were making outside, and the solemn respect we all showed inside the church. We took in the atmosphere and art of the place as we walked. Meanwhile a tall, young, brown-bearded priest was performing a baptism. A casually dressed and tattooed couple with a stroller faced him. I felt that the priest’s robes were more regal than those of Catholic clergy. The place was smaller and more intimate than the Catholic churches I know at home, and struck me as a bit more foreboding. This might be because it is not mine. At the end we each took a stick, lit it, and placed it in a small apparatus nearby. One by one everyone motioned the sign of the cross. I watched each of them, and then finally did so myself. This ritual was familiar to me, and reminded me how much devotion can wash over someone when he feels like he’s under the guidance of God. I thought of what I’d read in Codreanu’s For My Legionaries: about the power of prayer to channel the collective power of a people’s ancestors. When we exited the door I saw the blue sky in a slightly different way, if only for a few seconds.

Finally I accompanied Vulgar to his place where I drank tea as we listened to Fash the Nation. I had my luggage with me, which was heavy and quite bulky. We then went to meet Morana, Sludge, and the brass knuckles guy who wished me a warm farewell. Morana handed me a gracious letter which I later read in another country. It also contained a few stickers. Most were comical (some would call them “extreme”). My favorite one depicts a blonde-haired woman holding a baby while leaning against a tree. Amidst all the memes and bitter grievances, it displays the purpose of what we are trying to achieve in this global nationalist struggle. The text is in Bulgarian, and it reads: Be a Mother. Be Somebody’s Hero.