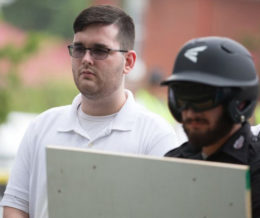 Audio version: To listen in a player, click here [2]. To download the mp3, right-click here [2] and choose “save link as” or “save target as.” To subscribe to the CC podcast RSS feed, click here [3].

Whitepill: James A. Fields will be exonerated of any charge of murder.

Just like we saw with George Zimmerman, Officer Darren Wilson, and so many others, the Left is going to pick the wrong battle to fight. They’re going to ignore the role of their own violence, and of the violence of groups the Left is sympathetic towards, in producing undesirable outcomes. Then, as a result of that selective vision, they’re going to demand a response that reality simply isn’t going to give them. They’re picking a terrible example to be the center-point of their case that violent Nazis came to wreak havoc on Charlottesville, and as usual, the truth about the examples they’ve chosen will eventually come to light. Thus, over the long run, once people are no longer high on the media buzz of the moment, the outcome of this case is only going to help their narrative continue to crumble.

James A. Fields is at least causally responsible [4] for the only death resulting directly from the action in Charlottesville, VA this past weekend; Heather Heyer [5], the victim, died after being struck by Fields’ vehicle.

But what we know now is that Fields never even sped up his car until one of the counter–protestors slammed the back of his car with a baseball bat, as can be clearly seen on video here [6].

After he first speeds up to get away, he can’t see that there is a row of stopped cars up ahead of him because of the density of the rapidly dispersing crowds. As a result, he rams into the back of the row of cars and gets himself stuck there.

After this, one can unequivocally see more people dive violently into his car from all sides, with one of them successfully busting the back windowshield open with yet another baseball bat in the span of just a couple of seconds (how many baseball bats were the people on this street carrying?! Anyway, this can be clearly seen thirteen seconds into this video recording [7]). This is the point at which Fields high-tails it in reverse in order to escape a situation in which he is pinned and surrounded by people assaulting his car and smashing the glass in with bats.

Dear reader, I invite you step aside from the particular details of this scenario, just for a moment. Simply imagine you’re driving your car, and someone comes up to you with a baseball bat and smashes in one of your car windows. What do you imagine comes next?

If just a moment ago, this person had a baseball bat, and they were smashing in your windows, and now there are no windows to separate the two of you, do you expect them to start engaging in a civilized discussion with you now that the two of you can hear each other more clearly with the car windows out of the way?

You expect to be assaulted. You expected to be potentially murdered, and very easily left brain dead for life or in a coma for weeks or months, because of a baseball bat attack.

You expect them to keep doing what they were already doing, minus the fact that a moment ago there was a glass window between the two of you. They’ve just smashed that window out of the way, and now all that’s left is you and a person carrying a baseball bat which they’ve demonstrated a very clear intention to use to harm you.

People are not legally obligated to sit still and be polite in a situation like that, and wait until they actually get clubbed in the back of the head before they’re allowed to react as if what they’re experiencing is an attempted assault, or even an attempted murder.

For the same reason, if someone points a firearm at you, you don’t have to wait until they prove their intention to kill you by actually pulling the trigger and firing a bullet towards your skull before you’re justified to act as if you are the victim of an attempted murder.

Because if you waited to find out for sure if they really did plan to pull the trigger, it would already be too late. You’d be dead. Splat. And what goes for pointing a gun at someone’s head also goes for smashing their car windows in with baseball bats.

Taylor Lorenz, a journalist at The Hill, spoke with law enforcement immediately after the event and confirmed that they believe Field was scared, not malicious [8]. Why? Because he was surrounded by counter-protesters assaulting his car with baseball bats. Now, if this is true, then the counter–protesters actually do in fact bear the entire blame for Heather Heyer’s death.

That is, at least according to the principles our legal system is based on.

Even if you think Fields should have had cause to fear for his own life, and still just sat there and let himself possibly get clubbed to death with baseball bats and who knows what else, it’s actually not how the law works.

Now, dear reader, please join me in imagining another scenario:

You, the shopkeeper, pull out a gun to defend your property and the lives of those nearby.
You aim to shoot the robber, but you miss—striking and killing an innocent bystander.

Who is responsible for the innocent man’s death?

You? After all, you’re the one who literally shot the man, right?

Well, this scenario has happened before, and the criminal justice system has answered that you are not [9]—because if anything, it is actually the masked robber who is responsible, since you never would have had to pull out the weapon if not for him.

But aiming to shoot someone is very different from what James Fields appears to have done. If someone pulls out a firearm and aims and shoots it person-height, we can assume that the only reason anyone would ever do this is because they had intent to kill someone. But even this does not apply to driving a vehicle down a crowded street. From the fact that Fields sped down this cramped alleyway, we simply can’t assume that this action represented an intent to murder anyone. All we can safely assume is that he wanted to escape the assault that was beginning to take place against his vehicle (whose glass would provide only a very thin layer of protection between him and the baseball bat–carrying crowds). So what goes for the case of a discharged firearm goes even more so for the case of speeding vehicle, since the former represents an unequivocal intent to kill someone and the latter does not.

In due time, Fields will be exonerated of the murder charge—to a chorus of liberal shock, just like George Zimmerman and Darren Wilson were. And just as happened in this cases, liberals aren’t going to update their beliefs in response to reality—they’re going to dig their heads in the sand even further by pretending this means The System is aligned with White Supremacy. But ordinary people will see through this. Liberal hyperventilation over legitimate judgments of the U.S. criminal justice system is predictable, and it is one thing that rather reliably drives people towards our side.