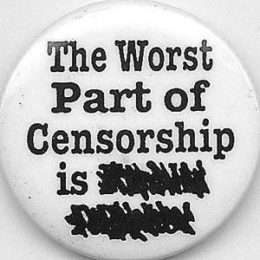 As everyone knows by now, just three days after the “Unite the Right” debacle in Charlottesville, a coordinated attack was launched by the Left against multiple individuals, organizations, and websites on the Right.

Counter-Currents had its PayPal account shut down, as did VDare and AmRen. Counter-Currents also lost its web hosting company (though an alternative has now been found). The same thing happened to TRS. The Daily Stormer looks like it has been shut down for good. Numerous individuals have been banned from Twitter and Facebook. VDare’s April 2018 conference has been shut down by the venue. And there’s more on this long list and it is still growing. Those interested in a more detailed summation can read Greg Johnson’s account [2]. This crackdown on thought criminals has also received widespread media attention, including commentary by Tucker Carlson [3] who, to his credit, has framed it as an attack on freedom of speech (couching it in the usual caveats about how much he hates hate, blah, blah, blah).

So many individuals and organizations were hit, and so swiftly — all within the space of a day or two — that this attack seems to have been carefully planned in advance. Although I am not normally a conspiracy theorist, I’m inclined to see this assault not as an impromptu reaction against Unite the Right, but as part of larger operation that included the unfortunate events of Charlottesville themselves.

As we now know, the violence that occurred in Charlottesville was allowed to happen — it was, in effect, planned. Police had orders to stand down and not to separate the “Alt Right” demonstrators from the Left-wing counter-demonstrators, who showed up with baseball bats and mace and drain cleaner (to throw in eyes that refuse to open to the cause of peace, love, and tolerance).

That violence would erupt was so predictable it could probably cure David Hume of his skepticism about induction. And, on cue, immediately the leftist press began pushing the narrative that the violence was entirely the fault of the Right. And, again on cue, the Great Purge began as one after another after another of us was rapidly hit. It was as if somebody in a control room somewhere dropped his bagel, picked up the phone, and simply said “Launch Operation Deathstar.” Whereupon orders went out to Google, PayPal, Facebook, Patreon, Instagram, KickStarter, GoDaddy, and even Uber.

This was the Left’s Reichstag Fire: the event they had been looking for to try to shut us down in every way possible. Some companies needed little persuasion, and no doubt acted on their own, and spontaneously. Others were clearly “gotten to” and asked “after Charlottesville, how can you possibly justify continuing to . . . ?” To which, craven cowards that they are, they naturally had no response.

None of these recent events should be at all surprising to us. All that is surprising is that they didn’t come sooner.

But now here is the good news: it’s not working. In fact, we are emerging stronger than we were before. Operation Deathstar was intended not just to cripple our operations, but to demoralize us. That’s just not happening, and it’s no surprise. Throughout history, despotic systems have launched massive, coordinated strikes against dissidents and it has always had the predictable result that the dissidents got angrier, more organized, more united, and more determined. And that’s exactly what is now taking place, my friends.

Counter-Currents has found ways around its abandonment by PayPal and its webhosting company. It’s not going anywhere. And, ironically, this assault seems to be having the effect of Uniting the Right. (With a few predictable counter-signalers.) A number of organizations and individuals on the Right are now in conversation about how best to coordinate their efforts, safeguard themselves against further assault, and how to strike back. I’ve not seen this much unity on the Right since eight of us got briefly stuck on an elevator at an AmRen conference years ago.

And you can feel the love: we’ve all been hurt, we’re all in this together, and we’ve got to help our neighbor. Greg Johnson’s PayPal assets were frozen for a period of six months. What to do? He immediately informed his readers and suddenly donations, most small but some significant, began not trickling in but pouring. He likened it to the scene in Dunkirk, where the horizon is filled with little boats from Great Britain, all sailing in to do their part, however small. That scene brought a tear to my eye, and so has the loyal support of readers of this website. Also, Greg’s web traffic almost doubled in the days following Charlottesville, when we were in the thick of the assault, and everyone had heard. Thank you, Antifa.

Others on the Right are also successfully finding solutions to this temporary setback — and a major thrust of our efforts is going to be the creation of our own cyber infrastructure, which will free us from dependency on companies infected by political correctness, or vulnerable to Marxist coercion.

What is the way forward, the way to respond to the present crisis and emerge stronger than before? Again, that’s already happening, but here are some random notes:

First, as I’ve already said, we need to become as independent as we can from reliance on Left-dominated companies and services. We need to do our own webhosting, for example. This is an area where there’s room for a great deal of brainstorming on the part of our compatriots, many of whom are very tech savvy, and far more tech savvy than I.

Second, we must get the message to the people that it is the Left that is violent and destructive. “Law and Order” was a successful message for Trump, as it was for Nixon. We need more ordinary Americans to see the violence and hatred of the Left. Presently, incidents are being under-reported or “spun” by the Establishment media. What’s the solution? Cause the incidents to proliferate to a point where the media cannot hide them all, and the public draws the right generalizations from repeated instances. How do we proliferate the incidents? By triggering the left — over and over again. This must be handled carefully, however, because we do not want another Charlottesville — another melee where blame can be laid on us, depending on how the footage is cut together for the evening news.

We need to take inspiration from Europe’s Génération Identitaire, who unfurled an anti-immigration banner on the Brandenburg Gate, and covered a statue of Empress Maria Theresa with a burqa. (All of this, I must admit, appeals to me because it reminds me of Project Mayhem — see my essay on Fight Club [4] in my new book.) These incidents made international news and caused the Left to go apeshit. Use your imaginations, please. The possibilities for repeated triggering are endless.

Third, where possible, we need to take legal action against companies that discriminate against us for our political views. For example, Airbnb scoured the social media of people who had reserved accommodations in Charlottesville and cancelled the accounts of anyone who seemed to the right of Pol Pot. This kind of stuff is actionable, folks, no matter what vague language they may have put in their “terms of service.” Suing people is not my bag, just because I have other things I’d rather do with my time. But in this war, we have different roles to play, and different projects. Legal action is not our top priority, partly because we cannot expect fairness from the courts. But some of the time you do get it, or you at least get a settlement. Let’s just hit these people every way we can.

Tucker Carlson, Paul Joseph Watson, and others have already floated the idea of declaring companies like Google, YouTube, and PayPal public utilities, in which case they would be prohibited by law from discriminating against people based on their politics. There is actually a very plausible case to be made for considering these companies to be monopolies. Indeed, the case for regulating them is so strong, it would probably eventually be made in a context unconnected to free speech issues. We need to push this idea for all it’s worth, in every way we can, in every venue. Yes, write to your Congressman.

Fourth, no more Mr. Nice Guy: a lot of the fellows I know on the Right are very concerned with honor. This is good, and we need to be honorable with each other. But our sense of honor is a weakness if we allow our enemies to use it against us. Our enemies really are what they accuse of us being: evil. They are twisted, dishonest freaks so set against life and truth and normalcy, Nietzsche and Rand would consider them implausible caricatures. These people feel that there are no limits to their behavior; that any action they take against us is morally justified. They are wrong about this. But if we adopted the same attitude we would be right. And we should. They really are evil, and they really are a threat to the existence of our people and our culture and everything in the world that is fine and decent.

This means that we are justified in adopting some of our enemies’ tactics, and all of their ruthlessness. I do not mean perpetrating acts of violence — not so much because that would be wrong, but because it would turn the unconverted against us. But we must not shrink from going on the offensive against these people in every other way we can. This includes ruining their lives and careers through public exposure of their actions (e.g., their violence), or their very private and personal foibles. Note that this is justified when directed against the Left. When Right-wingers direct such tactics against their own they must be shunned, as Greg Johnson has cogently argued elsewhere. Again, with each other we must behave honorably — but we have no obligation to do so with an enemy as vile as the one we face.

Now, with respect to the ruthlessness I have recommended that we adopt against the Left, please don’t let me hear any Judeo-Christian moralistic nonsense on the order of “won’t we become like them?” No matter what we do, we can never become like them, because whatever we do is done in the cause of right and truth. Yes, I know that they think that too. But they are wrong about that. We are right.

And, finally, we need to keep our chins up and our upper lips stiff. (Just like the chaps did at Dunkirk.) The enemy hit us and they hit us hard. But they did so because now more than ever they feel threatened by us. The Left is still reeling from the victory of Donald Trump, which they are correct in perceiving was at least partly a result of White America’s reaction against the insanity of Social Justice. The tide is turning. They sense it, and they are afraid that they are losing control. Ultimately, our victory is certain, because no ideology in revolt against reality can rule the minds and hearts of men forever.