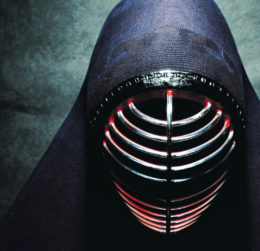 A young man went one day to meet a great kendo (Japanese swordfighting) master to become his student. The master accepted: “From today onward,” he said, “you will go each day to chop wood in the forest and draw water from the river.” This the young man did, for three years, at the end of which he told his master: “I have come to learn swordsmanship, and up to now I have not even crossed the entrance of your dojo!” “Good,” said the master, “today you may enter. Follow me. And now, go around the room, walking delicately on the edge of the tatami (a mat made of rice straw), without ever going over it.” The disciple applied himself to this exercise for a year, at the end of which he became very angry. “I am going. I have learned nothing which I had come for!” “Today,” answered the master, “I will give you the ultimate teaching. Come with me.”

The master took his student to the mountains. They soon found themselves before a precipice. A simple tree trunk, hanging above the fall, served as a bridge. “Well then, cross,” the master told the student. Gripped by fear and vertigo at the sight of the chasm, the young man remained paralyzed. At that moment a blind man came. Without hesitating, feeling with his cane, he got onto the frail bridge, and calmly crossed over. It did not take more for the young man to experience awakening, and abandon all fear of death. He threw himself swiftly above the abyss and found himself on the other side. His master shouted to him: “You have mastered the secret of swordsmanship: abandon the ego, do not fear death. By splitting wood and carrying water every day, you have built up powerful muscles; by walking carefully on the edge of the tatami, you have acquired precision and finesse of movement. And today you have just understood the secret of the way of the sword. Go. You will everywhere be the stronger.”