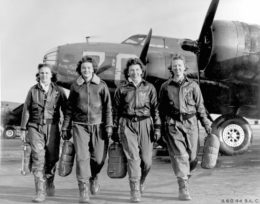 Elsewhere, SC women used different ideological openings to attack modernity and communism. In a 1945 speech, Cornelia Wood reflected that there always had been two ways of life in the world, “democratic or totalitarian, Christianity or Paganism,” as well as two forms of government: democracy or dictatorship. Wood related this to SC’s ideology: “freedom of the individual,” she argued, “is the cornerstone of democracy.” Under a dictatorship, like that of the Soviet Union, Wood asserted, “the individual is a slave to the state.” SC members used the idea of the “world slave state” to critique socialism, liberalism, the welfare state, secular modernity, and, perhaps most vehemently, communism and the Soviet Union.

In the modern world, communism, secularism and the slave state threatened Christian and individualistic values; the idea of the “World Slave State” served all factions of the SC Party in its challenge to the regimented welfare state and modern values that destroyed the family and church. Wood borrowed her views from C.H. Douglas’s ideas about the primacy of Christianity in the world, and Douglas’s belief in individualism as the source of societal virtue and his opposition to state power and banking.[1] [3] Thus, traditional Christianity, Wood suggested, elevated women “to a place where they have been cherished and protected by men.” In the post-World War II years, however, she saw “a deliberate attempt to lower women by obscene movies” and “trashy novels.” Like other conservatives, Wood criticized modernity because “Christianity has been ridiculed and scorned. Planners of the slave state know that to kill a democracy, Christianity must be killed because the two are inseparable.”[2] [4]

Social Credit MLA Ethel Wilson, the only woman to achieve cabinet rank during the SC years in office in Alberta, offered a further criticism of modernity. Commenting on the Cold War, Wilson, formerly an Edmonton city councilor and a union activist with the Packinghouse Workers, argued that the Soviets were “undermining national unity, destroying moral and social standards, and damaging faith in the democratic process and Christian principles.” Implying that ideas connected to secularism, relativism, and equality led to disorder, Wilson remarked that, “of the 22 civilizations that have existed so far in world history, 10 have fallen from within.” This fact could be easily adapted to support SC women’s traditionalist ideology: “history tells us that people of those eras became lovers of pleasure, taking no personal responsibility for moral standards or political ethics.” Wilson suggested that Western capitalist society was in jeopardy because of lax moral standards resulting from the breakdown of traditional values after the Second World War.[3] [5] She implied that a return to conventional moral values of family and traditional Christianity was necessary to forestall the end of capitalist society.

Social Credit ideology was contradictory and various factions emerged within the party. We might think of the main division as one between the “traditionalists” and the “modernizers.” As Leonard Kuffert has noted, many Social Credit leaders and members distrusted urban life, and the secularism and modernity that went with urbanity. They longed for a return to rural, “island communities”[4] [6] of a pre-industrial society where working women, communism, and atheism could not trouble them. This branch of the party consisted of “traditionalists”; their views borrowed heavily from evangelical Christianity. Most of the women discussed here fell into the “traditionalist” faction, their support for women’s advancement notwithstanding. Another, probably larger, group, influenced by the prosperity that came to Western Canada in the post-World War II period, was composed of technocrats or “modernizers.” These individuals – notably party leaders like Alberta Premier Ernest Manning, federal SC leader Solon Low, and prominent male members like Orvis Kennedy – favoured economic modernization in the form of bank and corporate mergers, technological development, and a laissez-faire approach to capitalism.[5] [7] There were also SC members who had a foot in both camps, notably British Columbia SC cabinet member Phillip “Flying Phil” Gaglardi, who supported an aggressively pro-business capitalism while also favoring a return to traditional Christianity as an antidote to the problems of modernity.[6] [8] It was ironic that many conservative women and men failed to see that rampant capitalism, an aspect of the modernity that they deplored, assisted in destroying the small town and white, European, and rural values that they upheld.[7] [9]

Ironically, given their traditionalist perspective, many SC women offered support for women’s advancement. In suggesting that women needed to come into the public sphere to “clean up” politics, SC women demonstrated their ties to first wave feminism. Pre-World War II women’s organizations like the Women’s Christian Temperance Union (WCTU)) and the Imperial Order Daughters of the Empire (IODE) expressed hope that women’s maternal nature could change society.[8] [10] A statement by Rose Wilkinson, a Calgary MLA from 1944-1963, shows the Socred view on a woman’s role in society. Wilkinson warned delegates at an SCWA convention that a national crisis existed. Arguing that the world was “suffering from the want of women’s brains,” she urged women to work together to “obtain a wider knowledge before accepting public office.”[9] [11] On the surface, this seemed like a statement that supported women’s roles in the wider world. What followed was more conventional: Wilkinson argued that the world needed women to go back to their traditional roles as wives and mothers if communism was to be defeated.

Elizabeth Robinson, MLA for the strongly rural constituency of Medicine Hat, expressed a similar opinion on women’s advancement. In a 1955 speech, she addressed the women present at the gathering and noted that “there are only two women in the legislature to represent 135, 500 in the province,” referring to herself and Rose Wilkinson, since Cornelia Wood had been defeated in the previous election. Robinson cited a statistic that, in the 1948 Alberta provincial election, women polled 43.6% of the total vote. She used this statistic to argue that Alberta needed more women representatives. Women might lose the privilege of voting through indifference. To fight against this possibility, they should “value this fundamental right and responsibility of citizenship.” Robinson stated that women were capable of accomplishments beyond the imagination: “there is a feeling that women should be playing a more active life in public affairs.”[10] [12]

In a later speech, Robinson asked whether women had forgotten the example of Emmeline Pankhurst and the early suffragettes in Britain, invoking a feminist cause that often endorsed racialist and elitist ideas.[11] [13] Drawing a direct line between first-wave feminism and SC women, Robinson celebrated the “Famous Five” Canadian women activists, particularly Emily Murphy, Irene Parlby, and Louise McKinney, all strong proponents of a white Canada and a strong British Empire. Robinson argued that Social Credit women were ideological descendants of these earlier maternal feminists. Robinson asserted that there was still a strong connection between Canadian conservative women and Britain: the “best known and loved woman in the world today is our own Queen Elizabeth II,” she remarked.[12] [14] SC women valorization earlier groups of reactionary and racialist women and feminists.

Indeed, Socred women looked to Britain as a place that reflected their values. British patriotism was thus an important element of Canadian right-wing women’s thought. A resolution passed at an Auxiliary convention in 1954 suggested that the Federal Government invite Elizabeth, the Queen Mother – known as possibly the most right-wing member of the Royal Family – to serve as the next Governor-General of Canada. The resolution asserted that the Queen Mother had “set an outstanding example in world affairs.” According to SCWA women, this qualified her to become the country’s representative to the British Crown. Similarly, the Women’s Auxiliary started all of their annual conventions with an appeal to the Queen: they pledged to be her servants and promised to always support the British Crown. In a sense, SC women’s valorization of Britain was hardly surprising: many Canadians, of various ideological stripes from the far right to the left, paid tribute to Canada’s British connection. The idea of “mother Britain” was a massive part of white, English-speaking, Canadian identity at least until the 1960s.[13] [15] SC women used a particular image of pro-monarchist, rural, and all-white Britain, emphasizing Canada’s ties to the monarchy, to buttress their traditionalist views.

In 1957, SC member Irene Arnason of Calgary further reflected on the ideal of British patriotism. Commenting on a recent visit by Queen Elizabeth II, she remarked that the Queen “symbolized the glory and greatness of Canada and the unity of our country where men and women work together in harmony and peace.” Arnason commented on the Queen’s appearance, noting that she looked “lovely” in a tailored suit and jacket. The Queen later met with Alice and Solon Low; Solon was then the leader of the Federal Social Credit Party. Irene Arnason portrayed Alice Low and the Queen as paragons of female virtue and beauty. Alice Low, she noted, wore a “full-skirted empire dress” in red with satin. Arnason’s remarks tell us much about the SC ideal of femininity. Ideal right-wing women were white, composed, and loyal to the British Empire. Queen Elizabeth II and Alice Low fit nicely with this model. SC women implied that women could take a role outside of the home but only in support of conservative, white, ideally British, values. Even in the Alberta of the 1950s, Canada’s connection to Britain remained strong and Canadian traditionalism retained a connection to British values.[14] [16]

[6] [22] Gaglardi’s ideology was a, rather weak, prelude to the views of Guillaume Faye, Archeofuturism: European Visions of the Post-Catastrophic Age (London: Arktos, 2010).