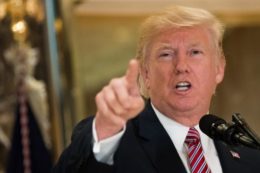 Furthermore, contrary to popular view, I believe that the 2016 presidential election was easy to prognosticate, and this could have been accomplished by anyone if they had taken the time to look at the data and analyze it in an objective and dispassionate frame of mind. Back when our country had a functioning educational system, objective analysis of data was commonplace. I remember a favorite history professor of mine—a committed socialist who was a delegate to the 1948 Progressive Party convention that nominated Henry Wallace as its candidate—told me in late 1975 that he thought Ronald Reagan would be the Republican Party nominee in 1980 and win in a landslide, and he laid out a scenario of events that largely came true. Now, this professor was no fan of Ronald Reagan, but he was a gifted historian who never forgot Leopold von Ranke’s admonition that history should be an objective narrative of things wie es eigentlich gewesen (as it actually happened).

Since universities have long abandoned the search for truth as their mission, and historians have long abandoned objectivity and rigorous historiography for the fill-in-the-blank laziness of ideology and theory, it is not surprising that Democrats were unable to see the coming populist tsunami and establishment Republicans were too stupid (and continue to be too stupid) to take advantage of it. In July of 2016, journalist Salena Zito remarked that when she traveled outside of her home town of Pittsburgh, she could travel 100 miles in any direction and see hundreds of Trump signs and not one Clinton sign. She said that something is going on that is not being reported. I decided to repeat the same experiment in my state and I got the same results. In fact, in one notoriously godless-pinko college town, dozens of Jill Stein signs and a few fading Bernie signs could be seen but not one Clinton sign.

In early August, the first statewide poll for my state appeared showing Trump with a 5-point lead. This poll was conducted by a fairly reputable firm and the internals of the poll showed a fairly fair distribution of respondents (although there was still a not insignificant oversampling of Democrats). Within 12 hours, a new poll appeared showing Clinton with an 11-point lead. Curious as to the discrepancy, I noticed that the new poll was 50% composed of women over the age of 65 who had never been married. Of course, one would expect a sampling population consisting mostly of bitter, barren harridans, i.e., Hillary clones, to be favorable to Clinton. Clearly, the polls were being manipulated to produce a desired result. This is not different from ideologically-driven academic historians producing historical narratives to fit their ideologies rather than the facts.

Then a month before the election, the Podesta emails were released by Wikileaks. While much has been made of the revelations that many of Clinton’s staffers do not care for her as a person, the bizarre spirit cooking sessions, and the dubious allegations about a pizzeria-based pedophilia ring, it was astonishing of how little attention was given to the emails as a primary historical document. Here we have almost real-time documents in which Clinton’s closest aides were engaging in the rarest political activity of all: telling the truth. Many of the emails discuss polls, and it is clear that the public bravado of Clinton spokesmen was glossing over private doubts. For example, in an email dated 3/8/2016, Elan Kriegel all but admitted the cooking of the “public polls”: “Public Polls: Many people have asked about the recent public polls. The biggest difference between our surveys and the public polls is composition of the universe. Generally, the public polls assume more people of color and fewer young people will vote than we do. If this is the case, we will obviously do better, but given the recent polling we are not as confident.”

This is not difficult to figure out. The Clinton campaign knew that there were problems, but we now know that this information could not be presented to the candidate herself for fear of setting off the famous wrath of Hillary. It was not that Hillary did not understand what was going on in her campaign. It was that she refused to understand what was going on. The difference between the two modes of understanding can be boiled down to a lack of self-awareness.

From Day One of the campaign, Donald Trump was derided as an ignorant, self-indulgent political novice with a short attention span. This type of negative boilerplate is something that political consultants and pundits use to make their cosmopolitan clients happy, but it also does a disservice to the very clients they are supposed to be helping because obscuring the truth makes it impossible to win victories. This is as true in politics as it is in war.

Let’s examine the mainstream cosmopolitan critique of Trump. Trump is certainly not ignorant. Stupid people cannot create business empires nor can they sustain them. I do not like George Soros, but he is obviously intelligent. And Trump did earn several Ivy League degrees, which must stick in the craws of the pundits who are endlessly telling everyone about how over-educated they are. Likewise, Trump is hardly a political novice. You cannot have created an international real estate empire without having been intimately involved in politics. Getting a zoning change in New York City is probably a more difficult political feat than repealing and replacing Obamacare. This brings us to the canard of Trump’s alleged short attention span. This is such a ridiculous allegation that I cannot believe that it has not been challenged until now. Trump has achieved phenomenal success in a field that requires an enormous amount of long-term thinking. Planning, securing financing and zoning variances, advertising, maintenance, and determining future viability of real estate is something that requires enormous amounts of long-term thinking. The construction of buildings also requires a logical and orderly mind that must adhere to architectural protocols and rigorous scheduling. It is Trump’s cosmopolitan critics in the financial sector—who are only concerned with split-second stock sales and who have no concern for the well-being of companies beyond the current quarter—who have the short attention spans.

Why has Trump not done anything to counter the mainstream cosmopolitan critique of him as only being a political idiot savant? The answer, I believe, lies in his tremendous ability as a performer. It is not just Trump’s ease speaking before the public, his ability to move thousands with his words, that is indicative of his ability as a performer. It is his understanding that great performers make their performances appear to be effortless. Winston Churchill wrote out his extemporaneous speeches and memorized them before he delivered them in Parliament. The paper that he always clutched in his hand as a performance prop contained the text of his “improvised” speech to be glanced at if he got lost. Russian-American author Vladimir Nabokov was famous for writing out conversational banter he would use if he were invited to a party. No matter what mode of performance, great performers always make it look easy. The audience doesn’t see the technique being used, nor are they aware of the years of practice endured by great performers.

It is always a good thing to be underestimated. Your opponents become complacent and fail to take necessary precautions. Since the election of 2016, we now know that Trump had a very disciplined campaign. The small IT firm that he employed ran rings around the Google and Facebook sycophants who refused to take Trump seriously. We now know that Trump decided shortly after the 2012 election to run in 2016 and that he registered “Make America Great Again” years before it became a slogan as easily recognized as “You Deserve a Break Today.” And we also know now that Trump’s ground game was extraordinary—but the Clintonites couldn’t see what was happening because the work was being done by unpaid volunteers working in offices that were out of sight of the cosmopolitan pundits who never set foot outside of the five-star hotels in which they were staying.

In a recent rally, President Trump was remarking about the collapse of the Russian collusion narrative when he stated that the Left always overplays its hand because it “lacks subtlety.” Now it might seem a case of the pot calling the kettle black for Donald Trump to accuse the Left of lacking subtlety, but this throwaway line is the key to Trump’s political genius. Trump understands that the best way to destroy his enemies is to get them to destroy themselves. This includes both the Left and the cuckservative Right. The technique that Trump employs is consistent, simple, and effective. President Trump will goad his opponents into hysteria. The pundits decry, the Left riots, and the cuckservatives cuck. It looks bad for a news cycle or two. Then reality sets in and the cosmopolitan narrative explodes, leaving Trump stronger, his opponents weakened, and cuckservatives with testosterone levels in the negative. This happened with pussygate, it is happening with the Russian collusion fantasy, and it will happen with Charlottesville. Liberals always double down and lose, conservatives never miss a chance to act like battered wives who take back their abusive husbands, and the Alt Right should remember that we’re in the struggle for the long haul. Donald Trump isn’t the perfect politician, but we have a lot to learn from his political acumen, self-awareness, and courage.