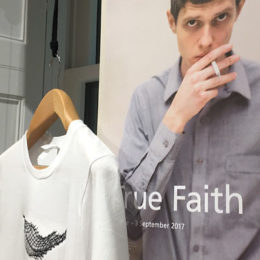 One of the exhibits in Manchester Art Gallery’s True Faith exhibition is a notebook in which Joy Division’s manager, Rob Gretton, used to write thoughts and reminders concerning the band’s schedule and ethos. Presented in a glass case, it is open at a page where Gretton muses on certain questions asked of him by the journalist Paul Morley. In particular, Gretton is thinking of the question about whether Joy Division should capitalize on their success and enter “the system” or whether they should remain “underground.” It’s a question that has dated not just culturally but also specifically with regard to Joy Division. After all, if a major art exhibition is held in your honor at Manchester Art Gallery, it is self-evident that you are not part of an underground. This dilemma is a fault-line that runs throughout this otherwise enjoyable exhibition.

According to the exhibition catalog, “True Faith explores the ongoing cultural legacy of Joy Division and New Order, and charts how their ideas were in turn absorbed, translated, and transformed in the work of other artists, designers, photographers and film makers.”[1] [2] On entering the gallery one of the first exhibits one comes to is a long case displaying a selection of Peter Saville-designed record sleeves. Admittedly, they are beautifully designed artifacts, but just what is achieved by displaying them in a gallery context? There was always a sort of cachet to owning these records because the design element seemed almost subversive in the way it married high art sensibilities with mass production. In this, Saville was more impressive than Andy Warhol because Warhol attempted to import an aesthetics of mass production into fine art whereas Saville was imprinting the commodity with a genuinely conceptual image. This made the owner of a Joy Division record feel (as many others have noted) like he was the owner of a genuine work of art. So it’s difficult to see what is achieved by presenting the sleeves in a gallery context. It seems to bestow the sanction of the art establishment and in so doing it undermines the subversive role that their original distribution had achieved.

Similarly, there is a room playing New Order videos directed by such luminaries as Jonathan Demme and Kathryn Bigelow. Again, the intention is to present them as works of video art, rather than a mere form of marketing. But isn’t that exactly what they were in the first place? One piece that is much more successful at expressing the hauntological weirdness that Joy Division also tapped into is Mark Leckey’s video, Dream English Kid, 1964–1999 AD (2015). In this compelling mish-mash of found and manipulated footage, Leckey weaves together a technicolor meditation on an England that will be forever bracketed by the end of the war and the birth of the internet. In that time, there was an evident sense of future possibilities but they were always undercut by the pedestrian realities of British social life. Leckey presents this era as a forward-looking, technical one but it has now become captured, superseded and looped by the internet. Leckey’s manipulations and collaging of this footage act as a subtle invocation of the occult forces that guided this blessed/damned period of history. In my opinion, this is the best artwork in the exhibition and also the one that best expresses the sort of hidden transmissions that Joy Division seemed to receive. Another work that reflects in some way on Ian Curtis’ sublime angst is Glenn Brown’s Dark Angel (for Ian Curtis) after Chris Foss (2002). Like many of Brown’s works, Dark Angel is essentially a piece of artistic plagiarism, in this case copying the science-fiction art of Chris Foss. Whilst at one level this brings into play those hackneyed questions of authenticity and high art/low art distinctions, it also allows for an associative free play, in this case marrying Ian Curtis with sci-fi visionary art. The painting (which is very large) provokes a feeling of sublime apprehension as we are invited to contemplate a wholly alien landscape, moreover one which is simply imaginary. In other words it brings into play the sublime landscape but denies it an actual, terrestrial referent. It is a sublime response to a virtual world. In the same way, Mark Fisher described Joy Division as, “Schopenhauerian” because of “the lack of any apparent object-cause for their melancholia.”[2] [5] Ian Curtis seemed to channel his creative (and destructive) energy from elsewhere. His lyrics generally avoided social critique because he was seeking not social reform but to immanentize the numinous. Brown posits a world which is wholly other, whence, perhaps, Curtis’ dark angel transmitted its occult messages.

Inevitably, there is an imbalance to this exhibition. On the one hand there are those designers and video directors whose work was created for Joy Division and New Order; on the other there are artists whose work has been inspired by them. This creates a de facto split between design work and fine art, and it seems to me that neither side of this split is able to enrich the other because each was working towards different purposes. To some extent I felt that the exhibition blurred these issues rather than clarifying them.

Part of the problem is that the curators and the participating artists all seem to buy into the mythologizing of Ian Curtis. This is apparent when confronting the final exhibit: Ian’s hand written first draft of Love Will Tear Us Apart, on loan from his widow Deborah. This appears as a holy relic, an impression strengthened by the fact that it is the only exhibit that can’t be photographed, thus emphasizing its unique and sacred position. The problem in mythologizing Curtis is that so much of his confrontational difficulty gets lost in the process. Now, of course, we all mythologize Ian for our own ends (remember the slogan, “Ian Curtis died for your sins”?) but this always results in a blunting of his dark message. And throughout True Faith there is ultimately an absence, an ironing out of some harsh realities.

In the exhibition catalog, the curator, Dr Maria Balshaw, writes about the May 22 terrorist attack in Manchester: “None of us should ever have to face such terrible loss, but the city and its people have decided to deal with this in a Manchester way. We stand together, as a diverse, open, loving, irreverent city – and our solidarity is supported by people all over the world. The tweet that went global took its words from Joy Division’s most famous song. It said, ‘If you think Hate Will Tear Us Apart, you chose the wrong city.’”[3] [6] The poetic genius of Curtis’ original lyrics for Love Will Tear Us Apart was in identifying the thing that draws people together as being the very thing that pulls them apart. It was a moment of miserable dialectical clarity. To reduce it to an impotent platitude is to destroy its import completely.

Visiting True Faith is an enjoyable experience. And perhaps that’s the problem because Joy Division and, to a lesser extent, New Order were always about something other than enjoyment. As I have argued elsewhere [7], Joy Division were seeking some sort of transcendent beauty but had no structural way of dealing with it. Ian in particular was always carrying the weight of this absent numen. In addition, any sort of artistic response to or contextualization of Joy Division is going to face the problem that it will be insufficient to its source material. Even really great art inspired by Joy Division will not be able to tune into the same dangerous frequencies that Ian Curtis’ psychic antennae were receiving. In order to experience the dark visions that Joy Division were conjuring with it is only necessary to place the needle on side one of Unknown Pleasures sometime around dusk, and listen. Some dead soul (who might be Ian) will take you by the hand and show you what was and what might be.

True Faith is part of the Manchester International Festival. It runs until 3 September 2017.