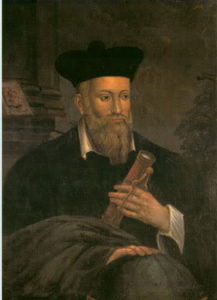 Like many in the West, I’m sure, I spent fifteen minutes in my youth being fascinated by the seventeenth-century Jewish prophet Nostradamus. Anyone who can fold time like a piece of paper and then burrow through it to get a peek at the other side is certainly someone we would all like to know about. Can that even be done? If so, in God’s name, how? How can someone make remarkably accurate predictions of events which are scheduled to happen hundreds of years after his death? Those of us who enjoy fantasy novels, ancient myths, role-playing games, superhero comics, and horror movies will, at least, entertain the possibility of someone like this actually existing. Emphasis on the word “entertain,” since opening up a young imagination to the supernatural or paranormal is never boring.

Of course, Nostradamus, despite a sound reputation as a peripatetic scholar, physician, and writer of recipes, was a fraudulent prophet whose deep erudition and flair for the oracular enabled him to fool people into thinking he could predict important events, even hundreds of years into the future. As a nineteenth-century critic put it, “The style of the Centuries is so multiform and nebulous that each may, with a little effort and good will, find in them what he seeks.”[1] Further, many of the contemporary reports of Nostradamus’ writings were negative and mocking, and it’s only because of works published by later scholars, who cherry-picked certain prognostications to suit events of their day, that people still care about Nostradamus at all.

For example, some scholars point to the following passage (Century X, Quatrain 34) as a superb prophecy:

The Gaul who will hold the empire through war,
He will be betrayed by his minor brother-in-law:
He will be drawn by a fierce, prancing horse,
The brother will be hated for the deed for a long time.

In 1814, Napoleon Bonaparte was betrayed by the King of Naples, one Joachim Murat, who was, in fact, married to the Emperor’s younger sister, Caroline. Uncanny, isn’t it? Was it divine inspiration? Or pure luck? With thousands of lines of prophecy to describe hundreds of years of time affecting millions of people across thousands of square miles, you’d think at least some of the pasta would stick to the wall, right? Just going by the odds, here.

(Or, better yet, a publisher who had actually read Nostradamus and felt that he could make a killing after Napoleon got deposed, had a secret conversation with Murat about betraying a certain “Gaul” and getting himself into the history books. Or, at least the ones dealing with Nostradamus.)

Anyway, I’m sure Murat’s betrayal brought much ill-will upon him back in the day (he was shot in 1815). I am equally sure that quatrains like this one evoked a certain amount of wonder in the European public as well. Such wonder sells copy, hence the large amount of commercial repackaging of Nostradamus in the centuries since his death in the seventeenth century.

But even the prophet’s own biographer, Edgar Leoni, admits that “[a]t best it can be said of Nostradamus as a prophet that he occasionally had a successful ‘vision’ of what would happen, but never of when anything would happen.”

So why do I bring up Nostradamus? Because I was reminded of him by a recent political discussion with a friend of mine. This friend is a staunch libertarian who tilts conservative. He’s well-read, pleasant to deal with, and open-minded. The ultimate normie, when I jokingly referred to him as a cuckservative, he didn’t know what it meant.

We were discussing the question of Islam in the wake of the London Bridge attack, and while he supported President Trump’s travel ban and a moratorium on Muslim immigration, he drew the line at mass deportations. I, of course, did not. And as I laid out my case for giving the boot to not only large numbers of Muslims but to many other non-whites as well, I knew I wasn’t getting through to him. Anyone familiar with Alt Right literature and commentary won’t need my arguments repeated here. However, after I finished my spiel, my friend said something I’ll never forget: “You can’t be convincing when all you’re doing is predicting what will happen in thirty or forty years.”

I had nothing to say to that. Of course, he was right. The vast majority of the Alt Right or White Nationalist position entails projecting a dire future for white people if things continue the way they are going. But this isn’t about iambic Nostradamian ambiguities. Rather, it’s about being ahead of the curve [2]. It’s about having a race realist understanding of human nature and a clear-eyed knowledge of history and applying both of these to commonly-accepted demographic data to predict a future as dreadful as the worst Nostradamus could ever conceive.

This is why I have always said that White Nationalism today is a position of peace. If we clear out most non-whites from white homelands now, the problem is solved with minimal bloodshed. If we ignore White Nationalism and don’t do this, then our children and grandchildren will be fighting to regain what’s rightfully theirs, block by block, house by house. Or they’ll submit to their conquerors, and our great-great-grandchildren in many parts of Europe will be a shade or two darker than we are and praying to Mecca five times a day. That’s my prediction.

In fact, I will compose a Nostradamian quatrain about it right now:

Night of Europa dawns to star and crescent,
The Turk, schooled in rape and plunder,
Darkens nations in law ever present;
The iris and the lion unfurled torn asunder.

Not bad for ten minutes’ work, right? Maybe I can get some of Big Nostro’s vibe to rub off on the Alt Right. Here’s another:

Angela Merkel and Emmanuel Macron
Are blind to Islamic observatives
Childless traitors, boy and crone
Conspire with a host of cuckservatives.

Because of the Gallic discord and negligence
A passage will be opened to Mahomet:
The land and sea of Siena soaked in blood,
The Phocaean port covered with sails and ships.

Oh, wait. That really is Nostradamus (Century I, Quatrain 18).

Anyway, after speaking with my friend, I was Monday-morning quarterbacking our conversation like I always do when I realized that he was wrong after all. Who says predictions make one unconvincing? The Catholic Church and various other Christian denominations have been foretelling all sorts of fire and brimstone for years, and they’ve never had any shortage of believers.

On a more topical note, there is an entire class of educated people these days in full thrall to prognostication. In fact, they won’t shut up about how bad our future is going to be. There is a whole industry – in academia, in politics, and in the press – which caters to these end-is-nigh elites who now have the ear of many of the most influential world leaders. And, unlike Nostradamus and his obscurantist poesy, these people are offering falsifiable predictions with the imprimatur of science; that is, hard dates and long lists of specific catastrophes.

Of course, I am talking about global warming alarmists who’ve been banging the drum about climate Armageddon for decades despite the vast majority of their direst predictions just not coming true. Yet they remain convincing to many. Click here [3], here [4], and here [5] for lists of failed global warming predictions made by scientists and their enablers in the media since the 1990s. Click here [6] for all the “last chances” these same people have been giving us to save the world in this century.

(Yes, when I am not consumed with Alt Right business, I am a big global warming skeptic, frequently visiting Watts Up With That [7] for the latest embarrassment being heaped on the climate change mafia in the UN and other places.)

If a player strikes out every time he’s at bat during spring training, he’s probably going to get cut from the team. But in the case of the global warming debate, the guys continually wiffing at home plate are now running the ball club. And since they refuse to play other teams on an even playing field, no one realizes how bad they truly are. I mean, at least Nostradamus got it right some of the time, even if it was just dumb luck.

After much thought, I came to a single conclusion: the Alt Right predictions are scarier. They are scarier because to accept them would require people to do things they quite naturally don’t want to do. This certainly isn’t the case for Nostradamus or global warming.

For one, Nostradamus doesn’t really predict the future. His writing is too vague and noncommittal for that (otherwise, he would have made a fortune “prophesizing” horse races and cock fights and the like). Instead, he predicts the recent past from the earlier past. Impressive, except when you realize that the rear-view mirrors through which we decipher these predictions are pretty cloudy and not good for much to begin with. Most importantly, Nostradamus does not require we do anything to appreciate his prophecies. He’s a curiosity more than anything. Therefore, not scary.

For global warming alarmists, on the other hand, rising global temperature is not really a threat since preparing for such a catastrophe is exactly what these people want to do anyway. It’s no coincidence that the policy changes the alarmists propose, namely centralization of government, reduction of energy production, and redistribution of resources are exactly what Leftists and globalists want to hear. According to Russell Kirk, “For Marx, the end of human endeavor was absolute equality of condition.”[2] And what can make us more equal than the Leftist prescription to cure global warming? For the inheritors of Marxism, global warming is a boon, not a danger. It promises to give them everything they ever wanted, all the with the approval of “science.” Hence, not scary.

(It also goes without saying that global warming fails to frighten skeptics, not because the predictions themselves aren’t scary but because there is so much scientific data lined up against them and so much corruption greasing the wheels of the global warming industry worldwide.)

In contrast to all this, I will wager that the Alt Right predictions scare even the Alt Right. It’s a miracle we don’t shuffle around all the time with a lit cigarette in our mouths like Chief Brody in Jaws mumbling something about “bigger boats.” The prospect of facing minority status, dhimmitude, slavery, and extinction would scare anyone. Furthermore, it challenges our survival instinct, an instinct we would rather keep buried under the paved roads and green lawns of civilization. If anyone accepts that the Alt Right predictions are likely to happen, then something must be done to stop them. If we are about to fly into a mountain, we change course. It’s a natural reaction.

And it is this very act of doing which frankly scares the crap out of normies like my friend as much as the predictions themselves. To deal with the crisis, they would have to completely subvert their post-racial system of morals (propped up by a self-serving and hostile Jewish elite and their goy allies). Even worse, they would have to fight.

Who would want to sign up for that double whammy?

And so, when presented with predictions from the Alt Right, many of these normies, despite how conservative or libertarian they claim to be, would simply say they don’t like predictions. If it ain’t true yet, that means it will never be true, right?

Maybe. But one thing that isn’t true is that they don’t like predictions. Judging by the success of Nostradamus and global warming alarmism, most of us do.

And speaking of liking predictions, I will end with this one from Nostradamus (Century V, Quatrain 74). I dearly hope one day it comes true:

Of Trojan blood will be born a Germanic heart
Who will rise to very high power:
He will drive out the foreign Arabic people,
Returning the Church to its pristine pre-eminence.