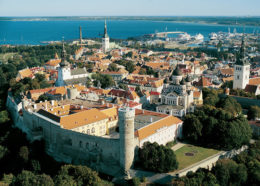 Thanks to the generous sponsorship of one of our donors, I am on another European listening tour. The first stop was Stockholm, where I spoke at the inaugural meeting of the Scandza Forum, along with Kevin MacDonald, Guillaume Durocher, Jonas de Geer, and Marcus Follin (The Golden One). The title of my talk was “Heidegger and the Jewish Question.” More than 100 people were in attendance, which is a very auspicious beginning for the Scandza Forum, a new metapolitical organization modeled on the London Forum.

On Sunday the 21st, after observing a mobile app launch party in which the Leftist and multicultural element of Stockholm was on full and sinister display, I took an overnight boat from Stockholm to Tallinn, Estonia. The contrast could not have been more marked. Aside from a few lame shipboard entertainers, the boat was filled entirely with white people — thousands of them, about half of them Russian, including hundreds of children wearing various folk costumes, receiving prizes, and posing for photographs.

I arrived in Tallinn on Monday, May 22nd. After touring the amazing Seaplane Harbor Museum [2] and the beautiful medieval city of Tallinn, I spoke to members of Estonia’s Blue Awakening youth movement on the relationship of language, myth, and identity.

The next morning I took a very fast and modern train to Tartu, Estonia — a beautiful Baroque-era city — to speak to another Blue Awakening group on order, chaos, and building a resilient nationalist community. I want to thank Ruuben Kaalep for setting up both meetings and serving as my guide.

While in Tartu, I visited the Estonian National Museum [3], a rather depressing modern building full of exhibits on Estonian history and folk culture. The best part of the museum were the exhibits on the Finno-Ugrian peoples of the world. The next morning I returned to Tartu and went to the Art Museum of Estonia [4], a quite beautiful modern building near a magnificent park and a Baroque palace built by Peter the Great.

Both museums were remarkable because they were entirely devoted to Estonian art and history, and although the National Museum did deal with the Estonians’ Finno-Ugrian cousins, they conspicuously rejected the idea that Estonia today is a multicultural society.

At the end of the Second World War, Estonia was 97% ethnically Estonian. The Soviets, however, killed and deported large number of Estonians and replaced them with largely Russian colonists, whose descendants make up about 30% of the present-day population of Estonia. The two populations do not mix much and remain easily distinguishable sub-racial types. (Estonians, by the way, are among the most beautiful people in Europe.)

In the Estonian National Museum and Art Museum, Russians are represented as invaders and occupiers, not as fellow citizens of a multicultural society. Although the official line toward the Soviets in museum captions and guidebooks is ideologically liberal, the underlying assumption of both museums is ethnonationalist — as it should be.

All told, I spent three-and-a-half days in Estonia, and I noticed that I felt much more relaxed and energetic than usual. I attribute it wholly to being in a nice white country. It is a sobering truth that as an American, I feel much more at home in an Eastern European country where people speak a completely alien language than in an major city in my so-called “homeland.” Truly, there is “no place like home [5]” in a multicultural society.

If you wish to visit an Eastern European whitopia, I highly recommend Estonia. What is old is beautiful. What is modern is often beautiful and always well-maintained and highly functional. The people are attractive and friendly, and everything is quite affordable.

On Thursday, May 25th, I flew from Tallinn to London and was plunged into a hot, humid, multiracial bedlam. However, once I got off the train and into an air-conditioned cab, I was astounded once again at the sheer magnificence of London, even in her present fallen and colonized state. As a friend later put it, whenever you despair of the people on the street, just look up at the buildings. In London, practically every modern building looks older, sadder, and drabber than anything built before WWII.

On Friday, May 25th, I attended the first annual Jonathan Bowden Dinner. Nearly 80 people were present, and as in the United States, the recent trend in British Nationalist gatherings is to attract increasing numbers of young, squared-away people. I gave a brief talk called “In Praise of Extremists [6],” and Jez Turner was presented with the annual Jonathan Bowden Prize for Oratory. I want to thank Stead Steadman for organizing the event and inviting me to speak.

On Saturday, May 26th, I spoke for the fourth time at the London Forum, which is the most important Rightist metapolitical organization in the UK and the model for the New York Forum, the Northwest Forum, the Scandza Forum, and similar events all over the white world. I was one of four speakers. More than 100 people were present.

My talk was called “A New Beginning: Heidegger on Ethnic Nationalism.” It was a well-received attempt to bridge the gap between Heidegger’s lofty and arcane philosophy and his support for National Socialism. I tried to follow Gordon Baum’s advice, delivered in Paris in 2001: “You gotta get it down where the chickens can get at it.” I will publish the text of the lecture at Counter-Currents next week.

I want to thank Jez Turner, Mick Brooks, and the rest of the London Forum team, especially the large and very professional security detail, for the opportunity to speak at another well-attended and flawlessly-organized meeting.

I spent the next three days in London, meeting with friends, supporters, and Counter-Currents writers; giving two interviews; and of course spending a good deal of time at the British Museum and National Gallery. I was especially impressed with a Dank Early Manga exhibit at the British Museum, Hokusai Beyond the Great Wave [6], which collects works from nearly 70 years of the creative life of the great Japanese painter and print-maker Hokusai, who is most famous for his iconic The Great Wave, which in the breadth of its influence, reproduction, and merchandising is a sort of Japanese equivalent of Van Gogh’s Starry Night. The exhibition ends on August 13, 2017, and I highly recommend it to anyone living in or passing through London. In particular, I found Hokusai’s late works — clearly inspired by Taoist metaphysics — to conjure up stunning irruptions of the numinous into nature.

On Tuesday, May 30th, I flew back to Eastern Europe to isolate myself, live cheaply, and recharge in a whitopian atmosphere while I spend a month working on The White Nationalist Manifesto. (Please click here [8] if you wish to support this project.)

Although I am humbled that so many Europeans are willing to show up to hear me speak — sometimes in a language that is foreign to them (how many Americans could do the same?) — the primary aim of these travels is to listen and learn from our European cousins, since the European movement remains decades ahead of the North American movement in ethos, organization, and accomplishments. So thank you for listening, and even more so for the opportunities to network and learn.

If you wish to support Counter-Currents, please consider a donation: