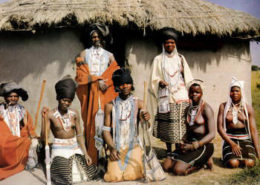 Ethnonationalists of any stripe tend to make a lot of noise about human differences, and racial differences especially. This is all well and good, of course, but we should remember that all human beings share certain traits, traits which reach beyond mere virtue and vice and into realms of hope and fear, ecstasy and dread. How we behave in such realms can be remarkably similar, regardless of our racial, cultural, or religious differences. Some people may be more sophisticated about it than others, but the results are often the same.

Despite being separated by one and a half centuries, several civilizations’ worth of learning, and at least one standard deviation in IQ, a little-known African tribe, which effectively exterminated itself in the 1850s, has very much to do with the British today and how they are failing to appropriately respond to deadly jihadist attacks such as the ones perpetrated in May and June of this year.

After failing to resist British imperialists in their native southeast Africa, the Xhosa tribe became an English colony and underwent a process of “westernization” at the hands of the invading whites. Like any conquered people, the Xhosa chafed under such treatment, since it stripped them of their self-determination and instilled in them feelings of helplessness and inferiority. In April 1856, as if responding to this malaise, a prophet in the form of a fifteen-year-old Xhosa girl heard a voice which promised to reverse her tribe’s fortunes. All the Xhosa had to do was halt all farming, destroy their stores of food, and slaughter their cattle. Once accomplished, this would magically evict the British, resurrect the dead, restore all food and livestock, and return the Xhosa to their former glory.

This prophesy soon took hold among the Xhosa, claiming their King as its most ardent convert. Xhosa everywhere began to see shadows of the dead rising from the rivers and floating past them on the breeze. Fantastic visions became commonplace as tribe members grew desperate to find that dea ex machina which would deliver them from the humiliation inflicted upon them so summarily and so condescendingly by the British.

As geophysicist David Deming described it [2] at Lew Rockwell’s site in 2009:

Vast amounts of grain were taken out of storage and scattered on the ground to rot. Cattle were killed so quickly and on such an immense scale that vultures could not entirely devour the rotting flesh. The ultimate number of cattle that the Xhosa slaughtered was 400,000. After killing their livestock, the Xhosa built new, larger kraals to hold the marvelous new beasts that they anticipated would rise out of the earth. The impetus of the movement became irresistible.

The Xhosa predicted that the prophesy would be fulfilled on the full moon in June 1856. When that didn’t happen, they pushed back the fulfillment date, at which point the prophesy failed again. They continued in this fashion until they realized why the prophesy kept failing. The Xhosa had not yet completely followed their prophet’s instructions! Despite what they had already done, most Xhosa had maintained some livestock and some farming in order to survive. Clearly, this had to end. Furthermore, there were a small number of Xhosa skeptics who refused to take part in the mass killing. These unbelievers became scapegoats for the prophesy’s failure, and were abused by the mainstream Xhosa.

Intent on making the prophesy work, the tribesmen then disposed of their farming equipment and slaughtered all their livestock, not just their cattle. By December, when another fulfillment did not come to pass, the Xhosa were consuming berries and bark in order to survive. By the following summer, real famine had set in.

All the food was gone. The starving population broke into stables and ate horse food. They gathered bones that had lay bleaching in the sun for years and tried to make soup. They ate grass. Maddened by hunger, some resorted to cannibalism. Weakened by starvation, family members often had to lay and watch dogs devour the corpses of their spouses and children. Those who did not die directly from hunger fell prey to disease. To the end, true believers never renounced their faith. They simply starved to death, blaming the failure of the prophecy on the doubts of non-believers.

There were 105,000 Xhosa in 1856 prior to the starvation prophesy. By the end of 1858, there were only 26,000. The rest had either starved or migrated. Of course, this made room for more white colonization in Africa, something that years of warfare and “westernization” on the part of the British could not accomplish. And for the ultimate irony, once the British moved in, they found that the surviving Xhosa made exceptionally obedient and useful servants.

This is truly an appalling chapter of history: the great blunder of imperialism leading to the greater blunders of delusion and self-extermination. What makes it even more appalling is that we see this same delusion and same self-extermination today among modern-day white people. When David Deming first introduced us to the sad story of the Xhosa in 2009, he was drawing a direct parallel to the current globalist obsession with anthropogenic global warming. In order to combat this pseudo-scientific bugaboo, Western elites have been insisting upon cutting back on the means of production, all the while making dire predictions which never come true. And instead of being deterred by such dispositive outcomes, they double down each time and vent their contempt upon skeptics who insist on having evidence and proof before drastically altering official policy.

Such a mindset is pure religion; it requires revelation rather than fact to get people to do things. It also has the tendency to seek out and expose blasphemers. This can be seen quite clearly in an interview [3] CNN‘s Jake Tapper recently held with Senator Rand Paul concerning President Trump’s abandonment of the Paris Climate Agreement. After Senator Paul did a pretty good job of articulating the reasons to exit the Agreement, Tapper ignored them and repeatedly challenged Paul to contradict a NASA scientist who believes in anthropogenic global warming. Doing so would be tantamount to blasphemy, and Tapper would have liked nothing more than to paint Rand Paul as a blasphemer, even if it meant leaving Paul’s arguments unrefuted.

While I agree with the moral of Deming’s remarkably clean analogy, there’s a similar – and far more pressing – analogy between the Xhosa and the modern white’s suicidal adherence to political correctness (which these days is linked to the church of global warming, but isn’t quite the same thing). It seems that the more jihadist invaders target native whites for abuse, rape, sexual slavery, and death, the more our politically correct elite wish not only to appease these invaders, but to oppress those of their own kind who remain skeptical about political correctness. This is the demise of the Xhosa writ long and large. Our elites pray to a certain god which they insist will solve our current problems. And when that god repeatedly fails, they blame themselves for insufficient supplication and the skeptics for not supplicating themselves. Just like the Xhosa, they fail to blame the very thing that is so obviously killing them.

It’s one thing to root through history to find a neat analogy for what is going on in the present; it is something else entirely to prescribe a solution. Again, we should look to the Xhosa. According to Deming’s math, the Xhosa lost nearly 80,000 people in two years – with 40,000 to 50,000 starving to death and the rest migrating. I presume that the 26,000 which remained simply outlasted their suicide-cult brethren who eventually died off. Had the cultists lasted longer, this number would have ended up being smaller. From this, we can conclude that the Xhosa who stayed didn’t survive due to any virtue of their own, and, in effect, traded a life of qualified freedom for a life of unqualified dependence and servitude. Of the entire tribe, the 30,000 to 40,000 who saved themselves by simply escaping were the only winners.

This is exactly what White Nationalists and many on the Alt Right have been calling for, for years. Escape. A divorce. A formation of whites-only nations with strict immigration laws, strict anti-miscegenation laws, and walls which run both high and deep. And if we have to leave a certain number of whites behind who’d rather preside over their own extermination as minorities among the blacks and browns, so be it. Perhaps this can be viewed as the next great evolutionary bottleneck for white people, alongside the bubonic plague and the Ice Age. Perhaps, in the end, only the whites who really want to survive will survive, and our race will emerge from this multiracial mess stronger and more racially determined than ever.

Don’t believe me? There are two little snippets of ephemera from June 2017 which prove my point.

The first took place during the London Bridge attack on June 4, while people were lying on the floor of a besieged restaurant as people outside were being killed. One white Briton cried out [4], “Fucking Muslim cunts!” Then another rebuked him, saying, “Don’t shout that. Fucking idiot. It’s not Muslims.”

Political correctness is simple idea everyone should be treated with equal dignity & respect. It’s not cause of terrorism. It’s antidote.

Barbaric syntax aside, this tweet not only speaks for itself, but inspired OregonMuse to the coin the term “Kohn” as a unit of stupidity.

Clearly, the minds of our Leftist elites have become hard-wired to avoid seeing that political correctness has indeed caused of all our recent troubles with Islam, and will never solve it.

Only, it will. Political correctness will finally solve our troubles with Islam the day that all whites bend their knee to Allah or go the way of the Xhosa.

There is a third choice, however, as many of the Xhosa who escaped realized. And we should take it.