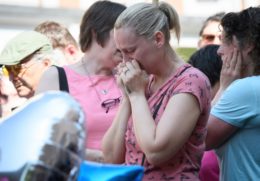 Manchester residents observing a moment of silence on Thursday.

What does it mean to be a Mancunian? Perhaps it’s as simple as being a resident or former resident of Manchester. Or perhaps it’s characterized by a particular type of identity, one that is often embodied in the numerous musicians who have come from there in recent decades. Take Guy Garvey, singer of Elbow:

The people in Manchester who will be most afraid because of what he [Salman Abedi, the Manchester bomber] did last night will be real Muslims, members of the real faith who don’t believe in violence and don’t believe in killing as a means to an end. Manchester’s multicultural history is part of why it’s such a successful city.

That’s exactly the sort of thing I’ve been hearing all over the media ever since news broke of the latest jihadi massacre that killed twenty-two people, many of them children as young as eight. The spirit of Manchester, we are constantly told, is embodied in the mantra that love trumps hate. Manchester is a global village within the global village.

But what about Morrissey, former singer of The Smiths and legendary Mancunian? He issued a statement the day after the massacre:

The anger is monumental.

For what reason will this ever stop?

Theresa May says such attacks “will not break us”, but her own life is lived in a bullet-proof bubble, and she evidently does not need to identify any young people today in Manchester morgues. Also, “will not break us” means that the tragedy will not break her, or her policies on immigration. The young people of Manchester are already broken – thanks all the same, Theresa. Sadiq Khan says “London is united with Manchester”, but he does not condemn Islamic State –who have claimed responsibility for the bomb. The Queen receives absurd praise for her ‘strong words’ against the attack, yet she does not cancel today’s garden party at Buckingham Palace – for which no criticism is allowed in the Britain of free press. Manchester mayor Andy Burnham says the attack is the work of an “extremist”. An extreme what? An extreme rabbit?

In modern Britain everyone seems petrified to officially say what we all say in private. Politicians tell us they are unafraid, but they are never the victims. How easy to be unafraid when one is protected from the line of fire. The people have no such protections.

Well, there’s no “love trumps hate” sentiment there. In fact, as is often the case with Morrissey, he seems to tap into the exact feelings and opinions of the despised English working classes, those people who by virtue of their dispossessed economic and social status are forced to live cheek by jowl with the realities of Muslim immigration rather than studying it from a university campus. Perhaps they might be the real Mancunians? But be sure that nobody wants to hear what they think about the bombing in Manchester, not unless they have been vetted in advance to ensure that their opinions are halal.

When Engels studied the working conditions of the English working classes, he looked in particular at factories in Manchester. The long hours, unhealthy working conditions, and economic exploitation were indeed shocking, and many of his observations fed into Marx’s work and helped to formulate the critique of capitalism. What Engels and Marx saw in nineteenth-century Manchester was a process of capital accumulation that was beyond the control of any individual capitalist. It was a type of inhuman machine, a monster that inexorably consumed the lives of the working classes as fuel for its own increasingly elaborate productions. Marx saw that women and children were being forced into the workplace to assist the expansion of capitalist production and increase its profits, partly through paying them less than men (and so helping to push down the male wage) and partly to facilitate the more rapid development of technological innovations that could cut down on costs. Marx wrote with horror of women and children being compelled to work alongside men, where they would be subject to foul language and behavior that they should never rightly have to experience. He resisted the dominance of capital because he believed in the integrity and humanity of the working classes and he respected the traditionalism and stability of their family lives.

The contemporary Left, ensconced as it is in the academy and the media, despise the settled, sedentary nature of the working classes. Such a nature is taken as being yet more evidence for the working classes’ lack of intelligence, along with their positive attitude toward Brexit and their mistrust of immigration. On the Left, it is no longer necessary to make an argument to debunk certain ideas – one merely has to show that they are ideas which are espoused by the uneducated; if this can be done, then it is sufficient to make those ideas untouchable. The Left despises uneducated whites with a double fury: they have the taint of white privilege, but they’re too stupid to renounce it. For the Left, tertiary education is a rite of passage wherein white people can learn how to delineate the structure of their whiteness and confess their sins. With the completion of three years’ penance and repentance, they are fit to become grown-up members of society, but, as with all converts, they retain a special hatred for the unconverted.

The form of identity that these whites assume is one that is infinitely malleable and disposable, but above all it must be a self-selected identity. Only the lumpenproletariat are forced to occupy the same square of land as their fathers and grandfathers, and consequently to lethargically retain the same verboten attitudes of their patrilineage, attitudes from which universities are expressly meant to enlighten us. For whites, the past is an evil place, and moral virtue is to be found in disavowing it and choosing a more enlightened form of belonging. This sort of selection of identity goes hand in hand with the geographical mobility that has become normal in Western countries since the War, and both signify a willingness to reject heritage and become rootless. These identities are signaled via social media apps, profile picture filters, and hashtags: the banal hieroglyphs of capital.

And so, which type of Mancunian should we look to when we hope to find the spirit of Manchester? The angry, indigenous working classes, descended from those factory workers whose lives Marx and Engels hoped to improve? Or the clever, social media-savvy temporary residents of that city, with their pious expressions of moral supremacy?

To the authorities, young, white lives in the north are cheap and expendable, as we found out with Rotherham. From the nineteenth century to the twenty-first, the working class English have been mere cogs in a larger machine. But those who have stayed put on their own patch and true to their English identities belong to a story that will be far more enduring than a Facebook trend. When the bluster of cosmopolitanism finally dies down, there will be a few English oaks standing where they have always stood, their roots planted deep in English earth.