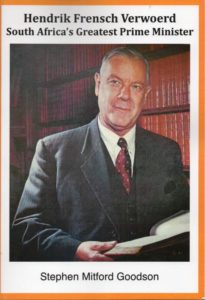 This is a thoroughly referenced, cogent biography on the “man of granite” whom I respectfully suggest remains immeasurably more than only South Africa’s “greatest Prime Minister,” but rather is one of the great statesmen of our era.

I have previously reviewed Goodson here [3] as the author of A History of Central Banking [4]and Inside the South African Reserve Bank [5], in which Goodson drew on his knowledge both as a professional financial adviser and as an ousted director of the South African Reserve Bank who had taken a lot of flak quite recently for his criticisms of the shenanigans within the Reserve Bank. Goodson is a leading campaigner against the debt-finance system in South Africa. Something of his rebellious lineage might be discerned from his middle name: Mitford.

The book is very nicely produced, with some interesting photos, including one of S. E. D. Brown, to whom the book is dedicated. Some older readers might recall Brown as the editor of The South African Observer (1955-1990). Ivor Benson and Brown were probably the leading English-speaking advocates for the Afrikaner and for apartheid.

Goodson’s portrayal of Verwoerd is particularly valuable in going beyond the standard biographical details and in setting Verwoerd in historical context. The overwhelmingly distorted view of “apartheid” is explained, which had been evolving in South Africa for three hundred years and which Verwoerd made consistent and articulated as a philosophy of life. Only a few years ago, a Maori Party Member of Parliament, Dr. Pita Sharples, could still get away with literally mistranslating apartheid as “apart-hate” in a New Zealand TV interview. In South Africa, this policy was rather one of overwhelming success in the preservation and advancement of the myriad of the country’s separate identities and was a doctrine of state that had the support of the majority of blacks and coloreds. Among those least favorable to cohabitation with blacks, for example, was a young Indian lawyer named Gandhi [6].

A student of sociology and psychology, Dr. Verwoerd was well aware of the complexities of human nature, including the distances between the racial psyches and cultures, “ethnic psychology” being one of the subjects he studied in 1926. Verwoerd’s academic record was one of brilliance and he became a notable scholar in both of these fields.

After having been a Professor of applied psychology, sociology, and social science at the University of Stellenbosch, in 1934 Verwoerd entered politics. His primary interest was in dealing with the problems of poor whites. He served for several years as co-director of a social housing project in Cape Town. In 1936, he was appointed by Dr. Malan, leader of the National Party, as editor of Die Transvaaler. In 1938, he was elected to an executive position in the National Party, in 1948 to the Senate, and in 1950 became Minister of Native Affairs, where he applied his scholarly expertise to learning about the Bantu, and expected his staff to do likewise. From 1948, under the Nationalist government, apartheid was codified, but Goodson shows that apartheid was long in the making and started under a British administration. This included the institution of identity papers, about which much nonsense has been written and spoken. Their real purpose was to protect the employment of indigenous Africans in South Africa from the multitudes of foreign blacks who sought to migrate to the country for a better life under apartheid.

It was under Verwoerd that the generous allocation of land for self-administering homelands was instituted. The policy was analogous to the cantons of Switzerland, and was heartily and openly supported by Verwoerd’s friend, Field Marshall Montgomery, and even by the UN Secretary General, Dag Hammarskjöld. While the likes of Helen Suzman, the Harry Oppenheimer-backed shill, stated that the land allotted for eighty percent of the population was minimal. A more accurate picture is that the lands were in fact particularly well-endowed, as Verwoerd did not see anything positive in the white population being surrounded by perpetually destitute black homelands.

Hospitals, schools, decent housing, and sanitation were among the projects funded mostly by taxes gleaned from whites. Goodson provides the data for these achievements. Industries near, but not within, the homelands were encouraged, which enabled black workers to commute in order to stay with their families while employed. Hence the family unit was maintained by apartheid and its associated economic planning; a situation that has since been destroyed by what the African National Congress was to call the “correct Marxist-Leninist path of free trade.” Goodson shows that Oppenheimer and other plutocrats were intent on centralizing industrial development within the cities as a move to break down the homelands and necessitate black migrant labor. Nelson Mandela’s mentor, Oppenheimer, always regarded the blacks as primitive economic fodder.

In 1958, Verwoerd assumed the Prime Ministership of South Africa. Verwoerd was fully aware of who his enemies were and exposed the Oppenheimer economic empire, as well as its global associations with the Rothschilds and their ilk, not to mention homespun plutocrats led by Anton Rupert. The “international money power,” as Verwoerd called it, created a world campaign to vilify South Africa and bring down apartheid so that, as Oppenheimer openly asserted, black labor and consumption could be more fully utilized. Despite the impressive economic progress of the country, the plutocrats claimed that apartheid was stunting development, and it was Verwoerd specifically who had to go because of his stubbornness. Plutocratic interests based in the United States played a major role in undermining South Africa, primarily through the African American Institute. The Sharpeville Riot of 1960 was portrayed as a massacre of peaceful blacks by white police rather than as a murderous rampage by twenty thousand machete-wielding blacks converging on a police outpost. Goodson provides several photos of the mountains of weapons that had been carried by the blacks, who have ever since been portrayed by the liberal media as a much smaller group (four thousand) of well-meaning, peaceful darkies. Not long after, the first assassination attempt on Verwoerd took place, carried out by a demented multimillionaire, David Pratt.

In 1961, South Africa withdrew from the Commonwealth as the campaign to isolate it gained momentum in world forums such as the UN. Among those who opposed Verwoerd were the Israelis, who consistently voted against South Africa in the UN despite the country’s support for Jewish identity in Palestine. Verwoerd became fed up with this duplicity. (It could be added that this was a time when Israel had its own agenda of filling the power vacuum in Africa as the European colonial powers scuttled, hence their support for Idi Amin and for the Mau Mau, for example.)

The Rivonia Trial in 1963 provided added ammunition for the opponents of Verwoerd, when a terrorist Communist party conspiracy had been unearthed. Again, this network of Communist terrorists, which included Nelson Mandela, which had planned a bombing campaign against civilian targets, has been portrayed ever since as a colossal travesty. The real travesty, some uncharitable types might suggest, is that these misanthropes were not hanged. A few obtained sanctuary in Israel where they were feted as heroes.

One of the most interesting aspects of Goodson’s book is the Hoek Report in 1964 by the Professor of Economics, Piet Hoek. This is a study of the plutocrats, their association with international capital, and an ideological discussion of the anti-national character of capitalism. At the head of this was the Oppenheimer empire, which was paying 5.4 percent tax on its profits. Hoek recommended large-scale changes in dealing with these corporations and state intervention in strategic assets controlled by plutocracy. Verwoerd had already set South Africa on a path to self-sufficiency, and moreover, South Africa did not owe any debt to international finance. That, I believe, is the real reason why South Africa was targeted: the economic policy which has been pursued under the present ANC-Communist coalition, in typical socialist fashion, has been to privatize the former “parastatals.”

In 1966, South Africa stood at the apex of its prosperity. The plutocrats had been stating for years that “Verwoerd had to go.” The situation reminds me of the way the social elite in the Depression-era US would casually remark at every opportunity that someone had to “kill” Huey Long, and the suspicions concerning Long’s assassination are analogous to those of Verwoerd’s.

A rootless colored man, Michaelatos Tsafendakis, was chosen as the assassin. Goodson traces connections that involved Anton Rupert in particular that implicate Johannes Vorster, Verwoerd’s successor, the CIA, and MI6, among others. Goodson draws on the evidence of Dr. A. Bird, a South African neurologist, who had been a mentor to Dr. Solly Jacobson, a Communist Party functionary. Jacobson had associations with both Pratt and Tsafendakis, and it is suggested that both had been brainwashed by Jacobson. Tsafendakis, who took a job as a parliamentary messenger, despite a dubious past, was able to fatally stab Verwoerd while Vorster stood by, shedding copious but unconvincing tears. Tsafendakis was declared insane and jailed for twenty-eight years, and ended up in a mental hospital. Vorster ensured that the hearing into Verwoerd’s death was held in secret and in short order.

Vorster paved the way for the dismantling of apartheid by stealth, despite the hard man image by which he was portrayed. The Hoek recommendations were buried and the report stifled. Mandela delivered South Africa to the privatization and globalization that Oppenheimer, Rupert, and others sought, but ironically, the Oppenheimer empire is, as Goodson shows, now a feeble shadow, while South Africa has predictably been reduced to an irredeemable shambles.