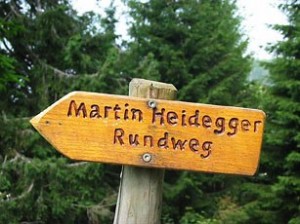 Heidegger treats it as a matter of fact that Jews have a marked predisposition for “planetary criminality.” But as a philosopher, he cannot be comfortable merely noting this fact. He wants to understand it, which is the subject of the next three passages.

All three of these passages touch upon the question of whether Jews are best understood as a biological race or as a nation. Heidegger is clearly skeptical that anything essential about Jewry can be understood in simple biological terms. For Heidegger, Jews are first and foremost a people, defined by a common cultural heritage and a common destiny that cannot be meaningfully reduced to or explained by biological race.

Jewry’s temporary increase in power is, however, grounded in the fact that Western metaphysics, especially in its modern development, furnishes the starting point for the diffusion of a generally empty rationality and calculative ability, which in this manner took up residence in the “spirit,” without being able to grasp the hidden decision realms on its own. The more originary and primordial the prospective decisions and questions, the more they remain inaccessible to this “race.”

In the first sentence above, Heidegger states straightforwardly that Jewry’s “temporary increase in power” is grounded in the modern spirit of technical-instrumental rationality. Since Jews have long lived as a rootless, commercial diaspora people, they found themselves uniquely adapted to the spirit of the modern age and thus naturally rose to positions of power. Heidegger believed this power is “temporary,” because he believed that modernity’s days are numbered.

Jews are not, however, merely objects of the historical process. They are also agents. Modernity cleared the way for them, but their own will to dominate pushed them into positions of power, and once there, they used that power to push the modernization process further. Thus Jews as a people also bear responsibility for intensified globalization.

Heidegger’s views should be contrasted to conspiratorial accounts of Jewish power like the Protocols of the Learned Elders of Zion. For Heidegger, the Protocols and other conspiratorial views of history are naively “humanistic.” They presuppose that “machinational history-making” really is possible. They posit that some human beings have the immense power and knowledge necessary to create history according to their own designs—whereas the vast majority of humanity has no power or responsibility in this area. For Heidegger, however, the ultimate causes of historical change lie outside our powers of understanding and control. Thus Jews did not create the modern world as an exercise in machinational history-making. But because of their superior adaptation to modernity, they now enjoy more power and more responsibility than any other nation for the present unfolding of modernity.

Heidegger’s claim that empty rationality and calculation have taken up residence in the realm of the “spirit” (a term Heidegger himself puts in quotes) and are unable to grasp the “hidden decision realms” is a reference to his idea that the modern conviction that we can understand and control everything is the product of historical forces that we can neither understand nor control, and which are thus invisible to the modern mind. Because Jews as a people are the vanguard of rootlessness and calculation, they are the least capable of grasping the hidden realm from which historical change emerges.

Heidegger then offers parenthetically an example of this Jewish blindness to the ultimate origins of historical change: his own mentor and the founder of phenomenology, Edmund Husserl.

(Thus Husserl’s writing on phenomenological observation while dismissing psychological explanation and historical settlement of opinions is of lasting significance—and yet it goes nowhere near the regions of essential decisions, but rather presupposes the historical tradition of philosophy throughout; the necessary consequence is reflected immediately in the swing to neo-Kantian transcendental philosophy that eventually makes a progression to a Hegelianism in the formal sense inevitable. My “attack” against Husserl is not directed against him alone and indeed inessentially—my attack goes to the neglect of the question of Being, i.e., the essence of metaphysics as such, on the ground of which the machination of beings can determine history. The attack grounds a historical moment of the highest decision-making between the primacy of beings and the grounding of the truth of Be-ing.) (circa 1939; GA 96: 46; my trans.)

One has to ask, however, if Husserl, who was Jewish, was really any blinder to Heidegger’s concerns than, say, Kant, who was German? At the end, Heidegger makes it clear that his objection is not to Husserl as a Jew, or Husserl specifically, but to the overall neglect of the question of Being, which in this context refers to the ultimate cause of historical change, and to philosophizing within the framework of the metaphysical tradition, which gives rise to modernity. Heidegger’s attack on the metaphysical tradition is an attempt to find an alternative to modernity, a new beginning for Western man.

The idea of an understanding with England in terms of a distribution of imperialist “prerogatives” misses the essence of the historical process, which is led by England within the framework of Americanism and Bolshevism and at the same time world Jewry to its final conclusion. The question of the role of world Jewry is not racial, but the metaphysical question of the type of humanity that can accept the world-historical “task” of uprooting all beings from Being. (GA 96: 243; my trans.)

Hitler admired the British Empire and wished to preserve it. Hitler also wanted to create an empire in Eastern Europe at the expense of Poland, Ukraine, and Russia. He hoped that Germany and Britain could reach an agreement not to fight with one another or interfere with one another’s imperial projects. Thus in this passage, Heidegger is criticizing Hitler’s thinking as superficial. As in passage number 3, above, Heidegger thinks that the struggle between empires, like the struggle between imperialism and pacifism, is superficial because it fails to understand that all of these options lie within the framework of modernity and are thus not alternatives to it.

Heidegger sees both Bolshevism and Anglo-American capitalism as merely different forms of the same technological nihilism. For Heidegger, an understanding with Britain is not possible, since Britain was not merely opposed to Germany’s imperialistic aims. Because Britain was an individualist, commercial-exploratory-imperialist seafaring civilization, she played a leading role in the global propagation of rootlessness and nihilism. Such a Britain could not allow a Germany that stood for rootedness, nationalism, and hierarchy and against globalization and leveling. Thus Britain used Hitler’s invasion of Poland as the pretext to start the Second World War, and was central to creating the alliance between Anglo-American capitalism and Soviet communism against German National Socialism.

But Britain is not the only nation in the vanguard of nihilism. World Jewry exceeds even Britain in rootlessness, commercialism, and calculation. Thus of all nations, the Jews are the best adapted to the spirit of modernity to rise to a position of leadership. This is why Heidegger says that that “question of the role of world Jewry is not racial, but . . . metaphysical.” Jews enjoy power and influence in modernity because of their long cultural adaptation to being a diaspora people and their collective will-to-power and sense they are destined for world rulership. Racial factors like IQ can’t hurt, but they do not explain why Jews gravitated toward banking, the media, and culture-creation, while other market-dominant diaspora peoples gravitated toward cheap hotels and hardware stores. Jews are powerful because they are “the type of humanity that can accept the world-historical ‘task’ of uprooting all beings from Being.” Jews then, really are a “chosen people” after all: “chosen” by the historical process to spread technological nihilism to the four corners of the earth.

The Jews, with their marked talent for calculation, have “lived” longer than anyone by the principle of race, which is why they are resisting its consistent application with utmost violence. The establishment [Einrichtung] of racial breeding [eugenics] does not stem from “life” itself, but from the overpowering of life through machination. What it pushes forward with such a plan is the complete deracialization of all peoples by clamping them into a uniformly constructed and tailored establishment [Einrichtung] of all beings. At one with de-racialization is the self-alienation of peoples—the loss of history—i.e., the decision realms of Be-ing. (circa 1939; GA 96: 56; my trans.)

Here Heidegger observes a classic Jewish double standard. Jews have practiced racism and eugenics longer than any other nation, yet they oppose the racism and eugenics of other peoples. But Heidegger’s main point is that eugenics is not a manifestation of the life force, but of the domination of life by modernity, i.e., by technological nihilism. But if eugenics is a manifestation of technological nihilism, then one cannot use eugenics to fight against it.

If eugenics is a manifestation of technological nihilism, what does it lead to? Heidegger speaks of uniformity and deracialization, but he does not really explain them. Perhaps, though, we can understand them along the following lines. If people can choose the traits of their children, will they choose to make them more fit or less fit for functioning in the modern world? Clearly the tendency will be to make children more adapted to modernity. But modernity is rootless, globalized, calculating, and nihilistic. Thus any people that practices eugenics in the modern age will tend to deracialize itself and to converge toward the creation of a homogeneous global modern man. In other words, there will be a tendency to become more and more like Jews. Which means that eugenics is a form of nihilism, not an alternative to it. The better adapted we are to modernity, the further we are from understanding the sources of modernity and its alternatives, namely “the decision realms of Be-ing.”

How, then, can we fight against technological nihilism without falling back into it? This is the topic of Heidegger’s last three passages, which we will examine in our final installment.