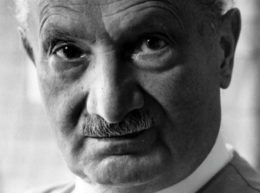 [4]Heidegger discusses “Jewry” (Judentum, Judenschaft), meaning Jews as a people, in nine places in the Black Notebooks. I will also discuss a tenth reference to Jews as a people that was discovered in the manuscript called Die Geschichte des Seyns (The History of Beyng, 1938-40) and published in 2014. All of these passages are anti-Semitic in an unproblematic fashion. They fall into three rough categories: descriptions of Jewish misbehavior, explanations of Jewish misbehavior, and remarks on fighting against Jewry.

One of the most secret forms of the gigantic, and perhaps the oldest, is the tenacious skillfulness in calculating, hustling, and intermingling through which the worldlessness of Jewry is grounded. (1938–1939; GA 95: 97; trans. Polt)

Here Heidegger remarks on how diaspora Jewry, because of its rootlessness and predominantly commercial form of life is uniquely adapted to the conditions of modernity, which Heidegger characterizes by “worldlessness” and “the gigantic” (das Riesige). Heidegger believes that both meaning and measure are endowed by rootedness in a particular language, culture, and homeland. Rootlessness, therefore, leads to worldlessness (a void of meaning) and the gigantic (an abolition of limits; bigger is always better; new is always improved). Both worldlessness and the gigantic are forms of nihilism that are characteristic of modernity.

World Jewry, incited by emigrants allowed to leave Germany, is pervasive and impalpable, and even though its power is widespread, it doesn’t need to participate in military actions, whereas all that remains to us is to sacrifice the best blood of our own people. (circa September 1941; GA 96: 262; my trans.)

In this passage, Heidegger expresses the belief that diaspora Jewry, stirred up by Jews forced out of Germany by the National Socialists, are responsible for the strange alliance of Soviet communists and Anglo-Saxon capitalists fighting against Germany. Furthermore, Heidegger remarks that Jews are warmongers, masterfully inciting gentiles to fight their battles for them.

Through this “history,” the essence of history comes to the brink of a decision, for the first time, between nothing and be-ing—the imperialistic-bellicose way of thinking and the humanistic-pacifist way of thinking are only “dispositions” that belong to each other, each brought forward in different ways as a pretext, “historiological”—“history”-making “dispositions” in whose realms no decisions are possible anymore—because they are just offshoots of “metaphysics.”

Thus both can be used by “international Jewry” to proclaim and accomplish one as a means for the other—this machinational “history”-making entangles all players equally in their webs—(circa 1940; GA 96: 133; my trans.)

In the first paragraph of this passage, Heidegger alludes to an idea that recurs in some of his other remarks about National Socialism and Jewry. Heidegger had hoped that National Socialism heralded a fundamental turning point in Western civilization, which he here characterizes as a decision between “nothing and be-ing,” which is really the most fundamental choice of all.

For Heidegger, it was a choice between cosmopolitan rootlessness, unbounded nihilism, and the conquest of nature versus rootedness in culture, tradition, and homelands; an acceptance of finitude and uncertainty; and a sense that we are part of the natural world, charged with being its guardians, not its exploiters and consumers.

Heidegger, however, was deeply disappointed in National Socialism. As the Third Reich unfolded, he came to see it as just another form of modern technological civilization, fighting over much smaller stakes like the difference between imperialism and pacificism. Heidegger saw these as merely alternatives within modernity, whereas he was hoping for an alternative to modernity. As he puts it, imperialism and pacifism are both “just offshoots of ‘metaphysics,’” by which Heidegger means the Western tradition from Plato to Nietzsche, the outcome of which is the modern technological nihilism that he hoped National Socialism would go beyond.

Heidegger does not, however, think that the metaphysical ideas of thinkers like Plato and Nietzsche are actually the causes of the modern world. Heidegger does not think that philosophers and poets are the “unacknowledged legislators of mankind,” who create the blueprints according to which history is built. Instead, Heidegger thinks that philosophers and poets are merely the first people attuned to changes in history and culture that cannot be meaningfully reduced to human intentions and purposeful activity and are fundamentally mysterious and unpredictable. For Heidegger, philosophy is not “behind” historical change, historical change is “behind” philosophy. Moreover, Heidegger believed that we cannot get “behind” historical change. It cannot be explained. It just happens. The idea that the human mind is behind historical change is sometimes called “humanism.” Heidegger’s idea that historical change is behind the human mind is thus referred to as his “anti-humanism.”

This explains the distinction in the passage above between history and “history” in quotes. When Heidegger uses history without quotes, he is referring to his own anti-humanist conception of history. When Heidegger places history in quotes, he is referring to the humanist conception of history as something that human beings create according to blueprints that they think up. The idea that mankind can make history according to our designs is just another manifestation of technological nihilism, which in the Black Notebooks Heidegger calls “machination” (Machenschaft), which connotes plans and schemes as well as technological manipulation and control.

The fact that human beings cannot really make history does not, of course, prevent them from trying. The unfolding political and environmental catastrophes of the 20th and 21st centuries are all exercises in what Heidegger calls “machinational ‘history’-making.” But Heidegger claims that the very idea that mankind can understand and control everything is not something that we can understand and control. We don’t understand why we think we can understand everything. We can’t control the idea that we can control everything. The idea that human reason makes us masters of the world is, ironically, a groundless mania that entralls us. Machinational “history”-making is an inscrutable dispensation from what Heidegger here calls the “decision regions” of genuine history. To speak of decision in this context, however, is misleading, because there is no subject or will behind history. It is a decision without a decider.

All those who fight over issues framed within the context of modernity—Jew and German alike—are equally entangled in its web. But because “international Jewry”—Heidegger himself puts the words in quotes, which indicates a reluctance to make the phrase his own—is a rootless and calculating people, it is uniquely adapted to modernity. Thus Jews are equally capable of using imperialism and pacifism as means to their ends in the struggle for power. Jews, moreover, have a systematic advantage over Germans and other rooted peoples in struggling for power within the context of global technological nihilism.

In the Black Notebooks and contemporary writings, Heidegger characterizes the outcome of machinational “history”-making as “global criminality” (Verbrechen). In 1941, he declared that:

The authentic experience that has been allotted to today’s generation, but which it was not able to take over, see through, and lay back into its essential inception, is the unrestricted outbreak of the unconditioned criminality of the modern human essence, in accordance with its role in the empowerment of power into machination. Criminality [Verbrechen]: that is no mere breaking up [Zerbrechen], but the devastation of everything into what is broken. (1941; GA 96: 266; trans. Polt)

This provides the context for passage number 4, from the manuscript of The History of Beyng:

Heidegger treats it as a matter of fact that Jews have a marked predisposition for global criminality. But as a philosopher, he cannot be comfortable merely noting this fact. He wants to understand it, which is the subject of our next installment.