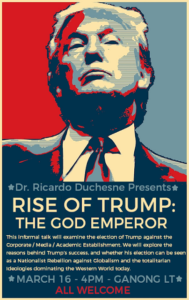 Both the Leftist and the corporate Right establishment are globalists, and both portray globalism as if it were an inevitable fact intimately associated with the growth of trade and communications. But globalism, as Robert Locke [2] points out, is a deliberate political choice, no more inevitable than the establishment of feminism, transsexualism, or Communism. Mass immigration is not inevitable. It could be stopped tomorrow. The European Union, which seeks to diminish the political independence of European nations, could be abolished, and this would not bring an end to globalization, any more than Japan’s decision not to diversify itself through mass immigration has limited its ability to become a global economic power.

The Left and the Right have actually reached a new consensus on the supposed economic benefits of mass immigration. The dominant pro-immigration argument today is really a combination of Right and Left economic concerns about the fact that the populations of the Western countries are set to decline dramatically in the next decades due to continuing below-replacement fertility rates, which is resulting in a shrinking labor force, while at the same time there is an aging baby boom generation. Together, these factors will bring about a decline, or so they argue, in both economic growth and the possibility of financing socialist programs. A decline in population, both sides say, will cause a “massive” crisis which, left on its own and without mass immigration, will result in widespread labor shortages, lower tax receipts, declining welfare support, and lower consumption levels. Only now has this convergence come to be well understood with Brexit, the election of Donald Trump, and the persistent growth of populist nationalist parties in Europe with platforms that stray between (and away from) traditionally Left and Right positions. As a recent mainstream media article [3] announced: “Forget left and right – the new divide in politics is between nationalists and globalists.” Before these developments, the academic world had no clue about this convergence. Here is one of many examples of media deception as part of the incessant campaign to instill the notion into the British that they are immigrants, just like the millions of Africans and Muslims arriving today. The fake New York Times (March 9, 2017) announced that “Britain is an Immigrant Nation [5].” This article, by Rachel Shabi, deceitfully equates the migratory flows of Vikings, Romans, Normans, and French Huguenots in the seventeenth century with the immigration patterns of today. Yet the scientific evidence has been mounting over the last few years showing the exact opposite. A paper published in Nature, “The Fine-scale Genetic Structure of the British Population [6]” (2015), reports that there has been very little genetic differentiation within the native British population. Only in the twentieth century has the migratory flow increased substantially:

In another article [7] which sums up these new findings, we learn that the contribution of the Romans and Vikings to the genetics of Britain was also marginal:

This article [8] was originally published at the Council of European Canadians on March 20, 2017.