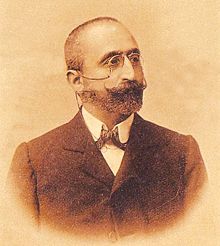 When Alexandru C. Cuza was born in Iași, Moldavia in 1857, Romania was not yet a unified country fully freed from Ottoman vassalage. Turkish rule had not been as direct or oppressive here as in the lower Balkans, but it left the young state and ancient nation with a host of social problems. Cuza was a child when Wallachia and Moldavia were united in 1866, and not yet twenty years old during the start of the war by which Romania would gain her independence. He would go on to study in France and earn doctorates in Political Science and Law. In The Romanian Road to Independence [2], Frederick Kellogg describes the mostly economically driven anti-Semitism that existed in the nascent united and independent Romania, especially in the former principality of Moldavia, when A. C. Cuza came of age:

The most charismatic and influential of these students was Corneliu Zelea Codreanu. According [3] to the Codreanu scholar, Dr. Rebecca Haynes, “Cuza became Codreanu’s godfather and acted as his mentor when Codreanu was a student at Iași University . . . In his attitude toward the Jewish minority, Codreanu was greatly influenced by his godfather, A. C. Cuza.” Together, Cuza and Codreanu established the League for Christian Defense (Liga Apărării Național Creștine, or LANC) in 1923. This radical student group used the swastika as a symbol a full decade before Hitler came to power in Germany, where both Cuza and the half-German Codreanu had studied.

This has sometimes been unconvincingly interpreted to mean that their split occurred because Codreanu was essentially more violent than Cuza. In fact, Cuza’s own rival militia has been described by some scholars as more violent than Codreanu’s Iron Guard – at least while Codreanu was still alive. According [4] to Ion Antonescu’s biographer, Dennis Deletant, for example, A. C. Cuza’s lancieri (or “blue shirts”) consisted of nothing but “an army of thugs,” so that in the 1930s, “it was not the Guard that posed the chief threat to public order.”

In the 1940s, which saw the Communist takeover of Romania, Cuza had to leave Iași for Transylvania. However, he was apparently spared the notorious fate of Ion Antonescu, probably because he was considered too old to stand trial before a kangaroo court. Thus robbed of the martyrdom seen in other, more popular Romanian historical figures, A. C. Cuza has not generated as much attention among historians as he merits. This may explain the dearth of information on him in English. He passed away in 1947. One particularly hostile source, the Romanian-Jewish historian I. C. Butnaru, laments [5] that “A. C. Cuza died comfortably in his bed and was never judged for his misdeeds.”

This text is included in the book The Teaching of Jesus: Judaism and Christian Theology [7] by A. C. Cuza. The text is copyrighted in 2017 by The Order of the Enemy. Permission is granted for the text to be reproduced online provided that this copyright is included.