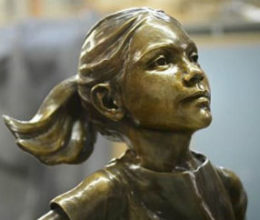 The longstanding tradition that a surging market is symbolized by a powerful bull – rather than, say, by a cow in calf – presents an irritating problem to feminists, a provocation that requires a feminist response. SSGA’s feminist response is a pony-tailed girl standing up to the bull.

The statue is both a feminist statement and an advertisement for SSGA’s index fund, which includes and rewards firms that put women in senior leadership positions, especially on corporate boards. Through its fund, the company boasts [2], “SSGA takes action to celebrate the power of women in leadership and to urge greater gender diversity on corporate boards.” There is even a plaque advertising the fund among the cobblestones at Fearless Girl’s feet.

There are too few women on boards of directors, and SSGA, the third-largest asset management company in the world, hopes Fearless Girl will help resolve the problem. As part of the campaign, Ron O’Hanley, SSGA’s President, has asked [3] (or demanded) that the companies it invests in “take concrete steps to increase gender diversity on their boards.” He expects, of course, that earnest liberal investors will reward his firm with their dollars, since he has signaled its virtue so clearly.

SSGA’s campaign has a moral purpose. Since a good company has a large number of women on its Board of Directors, and a bad company does not, moral progress requires that the latter resemble the former. Valuable social change will, somehow, occur once this moral objective has been achieved. That, at any rate, is part of the official explanation for why plucky Fearless Girl now boldly confronts Charging Bull.

The latter was created by Arturo Di Modica, who designed and cast his bronze bull in response to the market crash of 1987. He hoped that it would symbolize the resilient power of the American economy in the face of adversity.

It must be said that Di Modica’s Charging Bull can leave the impression that Wall Street is the American economy, and that the success of Wall Street therefore causes prosperity; but if we leave such issues aside, his intentions were good. Their solidification in bronze cost him about three hundred fifty thousand dollars of his own money.

Di Modica complains that Fearless Girl is an “advertising trick” concocted by an immensely wealthy company. He also complains that the meaning of his bull has been radically altered by SSGA’s decision to place Fearless Girl in opposition to it. Like many feminist creations, Fearless Girl is parasitical. She requires the antecedent creation of the bronze bull and derives her meaning from being physically positioned near it. As SSGA notes on its Website, “Fearless Girl was created and placed in a spot that made her impossible to ignore.” Arturo Di Modica’s bull has now become the patriarchal enemy of the girl and of everyone the girl purportedly represents. The massive bull, which once stood for a vigorous economic power that benefits everyone, has instead become a bad guy and a symbol of the aggressive masculine forces that the confident girl (and women like her) must confront and overcome. It has been enlisted, against its creator’s wishes and without his knowledge, into a feminist political campaign paid for by one of the planet’s most prosperous companies, with assets of over $2.4 trillion. Di Modica reasonably interprets this as an act of cultural vandalism by a great financial power against a work of art.

In a significant moment in Robert A. Heinlein’s Stranger in a Strange Land [5], nurse Jill Boardman recognizes that she has, by an act of bravery, put herself in conflict with global society’s ruling powers: “She was not sure what she had done, or what laws she had broken; she simply knew that she had pitted her own puny self against the combined will of the Big People, the Bosses, the ones who made decisions.”

Implied in this fictional episode is a sociopolitical structure that, rightly or not, many of us give credence to and all of us recognize: almost all men and women, despite widely ranging skills and incomes, are governed by a small elite – the big people, the bosses – who are vastly more powerful than they are. If you are one of the little people, crossing the bosses gets you into real trouble. They make all the important decisions, which everyone else must accept.

The Left has historically perceived this structure and has organized against it, whereas people on the Right are often more inclined to view the bosses with sympathy on the assumption that they are much like the rest of us, only wealthier and more powerful. Today the slogan “we are the ninety-nine percent” is more popular on the Left than on the Right. According to the slogan, all of us belong to the ninety-nine percent; the bosses are the one percent. Social improvement comes through empowering the former and reducing the power of the latter.

Insofar as Fearless Girl is a symbol from the feminist Left, she suggests a Leftist rejection of that structure and its implied call to oppose the powerful. The explicit purpose of Fearless Girl is to encourage or compel companies to put women on their various boards of directors, women that the companies would not, if left to their own corporate devices, so elevate. There must, SSGA and Fearless Girl tell us, be more women in powerful positions on Wall Street and in corporate boardrooms. There must be “gender diversity” among the bosses. There is no reason to overthrow or disempower the bosses; feminists and their allies can make the bosses better by ensuring that at least half of them are women.

Needless to say, a waitress working in a low-end restaurant does not materially profit from the presence of women in powerful positions inside corporations, nor does any other woman working anywhere else, from a minimum-wage maid to a successful female architect. The only women who would profit from more gender diversity in corporate boardrooms are, to state the obvious, the women who end up sitting in them, while receiving substantial remuneration for doing so. And since any corporate women eligible for elevation to a corporate board are already prosperous and successful, Fearless Girl can represent only the aspirations of wealthy women who hope to become even wealthier.

There is no harm in their aspirations, but it requires real audacity for feminists to present them as an important element in a moral crusade against entrenched patriarchs, especially when the patriarchs have paid for the statue that physically symbolizes their crusade. Patriarchs in the publishing business even put out magazines that chronicle the crusade, such as Diversity Journal, which anyone eager to waste money can pick up for thirty-five dollars.

Although Fearless Girl seems small as she faces a much larger antagonist, her meaning is demonstrably more powerful than either Di Modica himself or the meaning he intended by his bull. The man who created and still owns the bull does not want the girl standing in front of his statue. Yet his wishes can be ignored, even though his Charging Bull has become an important landmark in New York. Mayor Bill de Blasio tweeted that “men who don’t like women taking up space are exactly why we need the Fearless Girl.” Since the mayor of what is arguably the world’s most important city prefers the feminist girl to the famous bull, and since a wealthy company brought her into existence as the bull’s opponent, there can be little doubt about which of the two wields the greater political power. The plucky four-foot girl is smaller than the eleven-foot bull, but at present the bosses prefer her feminist meaning to the meaning Arturo Di Modica intended by his creation.

Endowing abstractions with life and agency is an ancient trope called personification. It is a delusion if the abstractions are understood literally as animate, concrete forces acting in the world. It is, nevertheless, reasonable to say that the decision to oppose Fearless Girl to Charging Bull was made by the flesh-and-blood bosses at SSGA under the guidance and direction of the powerful abstraction diversity, which now both sets an agenda that the big people enact and convinces the little people to endorse the agenda. The ideas of feminism and of diversity have become so culturally powerful that a surprising number of men and women are capable of accepting the wildly implausible claim that the magical abstraction named Diversity will, by making a small group of rich and successful women even more rich and successful than they were before, empower all other women and improve the lives of everyone else.

In the triumph of Fearless Girl we can see that the well-known structure that contrasts the little people to a small class of powerful bosses can be an unreliable model for understanding what occurs in the world. Power in a culture is located more in the ideas that dominate our minds and less in the big people who appear to be in charge.