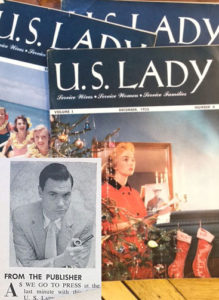 Nearly fifty years after his assassination, the image of George Lincoln Rockwell (March 9, 1918-August 25, 1967) is more iconic than ever. You can drop his amiable face into a Twitter avi or Website header, and feel pretty certain that most of your audience will know who it is. At Amazon, publications by and about Rockwell run on for pages: new, used, rare first editions; hardbound, paperback, Kindle; memoirs, speeches, political tracts; cartoon pamphlets and dank satires.

Today, Commander Rockwell is hitting levels of recognizability that shouldn’t even be possible. This was hardly foreseeable when he was killed in 1967, and the press treated him as a has-been, a prankster past his prime.

In his obits he got portrayed as a kind of ersatz-Nazi counterpart to Lenny Bruce, the Jewish “sick comic.”  Both Rockwell and Bruce had enjoyed a brief vogue in the early ’60s, capturing headlines as masters of outrage and provocation. Then they stopped being edgy, funny, bad boys; and went on to ignominious deaths. Lenny Bruce OD’d on heroin in August 1966 while shooting up in a bathroom. A year later, Lincoln Rockwell took a sniper’s bullets while driving away from a strip-mall laundromat in Arlington.

Six months earlier (February 1967), Esquire had published a long Where-are-they-now? article on Rockwell, telling how sedate the Nazi provocateur had become over the years. It ran under the title “The Last Word (We Hope) on George Lincoln Rockwell.”[1]

But that was then. Nowadays, in the Age of the Meme, Rockwell’s appeal is easy to see. An ad man and commercial artist, he specialized in nugget-sized satirical takedowns (“The Diary of Ann Fink,” “Whiteman vs. Supercoon”) that remain lively and relevant today. Even his long-form works, such as the autobiographical This Time the World [2], are easy-breezy reads that waste little space dithering about political theory. No one ever mistakes Rockwell for another Alain de Benoist, let alone a Carl Schmitt; but as a gateway drug he’s the reddest pill of all.

Derogatory treatments of Rockwell often say he got into the Nazi thing after failing in everything else. No doubt this idea is encouraged by Rockwell’s own autobiography, with its endless litany of fiascos through the 1950s, as Rockwell attempted to spearhead “conservative” and “anti-Communist” organizations in between duty tours as a naval officer. But notwithstanding his personal frustrations, Rockwell was really quite successful as both officer and entrepreneur. In 1955 he founded U.S LADY, a high-circulation magazine aimed at service wives. He started it on a shoestring and soon sold his interest for quick cash, but the magazine itself thrived for a dozen years more.

Following U.S. LADY, publishing executive Rockwell landed a position as assistant publisher with The American Mercury, then owned by munitions tycoon J. Russell Maguire [3]. When he got annoyed with Maguire in 1957, Rockwell left his employ and moved on to a brief association with William F. Buckley Jr.’s National Review.

What all these magazines had in common, superficially at least, was a patriotic “conservatism.” But only U.S. LADY was under Rockwell’s complete control, for the issues of September-December 1955. The content is deceptively anodyne, and little attention has been paid to it. But if you poke around, Rockwell’s political message is both clear and nuanced. From the start he intended U.S. LADY to be a propaganda tool against Cultural Marxism:

. . . I realized that such a magazine could have a powerful political effect. I had carefully observed the technique of sly propaganda—always in the form of entertainment and information—in all the Jew-dominated papers, magazines, books, etc. and I believed that I could reverse the process with my magazine for servicemen’s wives. I would have to be very subtle, of course, but I could as months went by, begin to drive out the filthy ideas of Marxism, mobocracy and racial defilement and replace them with ideas of republican government and racial self-respect.[2]

Rockwell didn’t see that plan through to fruition, but there’s enough in his early issues to spot a trend.

The first thing a latter-day reader might notice about the editorial and advertising content of U.S. Lady is that it is very very white. This was not too unusual for the time, when a strict color bar prevailed in magazine publishing. But what is striking is that nearly all the photographs depict young, very good-looking women, men, and children. Commander Rockwell himself appears in a couple of pictures with his Icelandic wife, Thora, and their two blond children. [4]
A monthly feature, “U.S. LADY-of-the-Month,” was used to showcase an exemplary service wife from an exemplary service family. The inaugural winner, a contributing writer named Nadine Crawford, was momentarily embarrassed at receiving her $100 prize from the cash-strapped magazine, so she and Rockwell made a pictorial joke out of handing the check back to the publisher in exchange for 20 shares of stock. [5]
Another monthly offering, “U.S. Young LADY,” was a kind of service-brat version of the “Tips for Teens” social-etiquette pages one would see in issues of Seventeen or American Girl. Reading between the lines, one gathers that girls from service families need to guard against acting all sophisto and snobby:

You are a service teen. You’ve traveled to all these interesting places, and a boy might think you are a bright and distinctive personality to date. But dis-courtesy can conjure him into concluding a service teens are self-centered and noisy. Football dates with this dream guy may be the beginning of a long year of games, frat parties, movie dates, and more. Or, they may be the beginning and end of a short-lived, ill-mannered romance.

It’s autumn, and football season, and your job, girls, is to make sure you know a bit about football. But not too much!

“If there’s anything I hate,” one boy declared, “it’s the girl who knows more than I do about a man’s sport.”

Homemaking is a recurrent subject, and one in which U.S. LADY takes a very practical, carefree attitude. The realities of young service families’ lives are buttressed with a confident, upbeat attitude. The above-mentioned Nadine Crawford confesses she’s a slob and that her dining-table is a mess, serving as her writing-desk and the workbench for all the kids’ homework and hobbies. Her family always eats in the kitchen, anyway.

Jane Hevner, U.S. LADY-of-the-Month for November 1955, reports that living in a trailer is really neat:

[She] makes her home in a 41-foot trailer set in a 30 by 60 foot well-kept lawn a few hundred yards from the landing strip at Bolling Air Force Base in Washington DC. . . .

What is is like to keep house in a trailer? According to Jane, it is the only way for service families to live. They love it. “Both of our children were born to trailer life. We bought the first one—a 25-foot job soon after we were married—in 1947 . . .”

The Hevner trailer is spic and span . . . The walls and ceilings are pine-paneled, and Jane cleans and waxes them once every three months. The inlaid linoleum floors must be scrubbed and waxed once a week. One of Jane’s fondest hopes is that eventually they’ll have wall-to-wall carpets for the living room and the bedrooms . . .

This rough-and-ready attitude to home dynamics is part-pioneer and part-bohemian, and  runs diametrically opposite to the Madison Avenue ideal of 1950s nuclear-family life. And coincidentally or not, carefree housekeeping and trailer living were very much the style of the Rockwell family in the 1950s.

Rockwell’s politics are most detectable in the articles on overseas postings and conferences. For the December 1955 issue, Suzanne Shea, the wife of a Pentagon colonel, writes “Froeliche Weinachten,” recalling in loving detail the Christmas customs she saw when stationed in Germany a few years before. We get descriptions of parties and decorations, and lip-smacking memories of christollen, mohnkuchen, marzipan, and other Yuletide treats. But never a single word about our having fought a war with the Germans a few years before. Not even a mention of why Mrs. Shea’s army-officer husband was stationed there in the first place. [6]
In fact, there is no mention at all of “Nazis” or the Second World War in U.S. LADY. The closest we get is a story about a recent American women’s conference (“Yankee Gals in Europe”) held at Berchtesgaden, helpfully described here as the former site of Hitler’s “stronghold”:

The soaring Bavarian Alps provided an appropriate setting for the recent 16th bi-annual Conference of American Women’s Activities in Europe. Nearly six hundred delegates assembled in Berchtesgaden, Germany, the site of Hitler’s former stronghold. Representing the enthusiasms of thousands of American women in the European Command, these leaders united in a sincere effort to achieve mutual goals . . .

Mrs. Foster L. Furphy, chairman of the conference, encouraged the delegates to “help other people realize they have a real purpose in Europe in projecting the best of the American way of life.” [7]
Whatever became of this redoubtable matron, Mrs. Foster Furphy, we may assume that her notion of “the best of the American way of life” was very much in sync with Commander Rockwell’s ideas; and not at all what passes for the “American way” today.