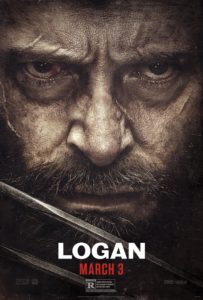 Logan, a film named after its main character, also known as Wolverine of the superhero team, the X-Men, is simply more Hollywood propaganda for perverts who fantasize about killing off white people, on one level at least. Perhaps unintentionally, it is also a warning concerning the decline of Western society. The message is that the white man is either old and dying, or simply evil and deserving of death, while the non-whites are poor, yet brave and fighting against oppression by whites.

At a time in the near future when mutants endowed with extraordinary powers have appeared, including the superheroes known as the X-Men, but are now believed to be going extinct, a corporation called Transigen has artificially created numerous mutant children in a lab, holding them in confinement and planning to use them as soldiers. The children, objecting to this plan to the point where at least one of them commits suicide, are rescued with the help of Gabriela, a brave Mexican nurse employed by the corporation. In line with the typical narrative of the misunderstood victim, Gabriela states that “they thought we [the nurses involved with the escape] were too poor and stupid” to understand their plot, and that “we are poor, but not stupid.”

The depiction of the all-white Transigen is a comically extreme demonization of white men. The evil corporation’s leader, Zander Rice, explicitly states at one point that the mutant children are to be seen as things, not children, and this lack of compassion for others is consistent throughout the film. Near the end of the film, he confesses to having created a virus which has killed most of the mutants on Earth. At this point, Logan kills Rice with no provocation beyond his unethical activities with Transigen, and it is implied that this is justified.

The head of the company’s security forces is a blond psychopath named Donald, who has the flag of the hanged pirate captain Calico Jack tattooed on his throat. Not only does he torture a mutant in order to convince him to betray his own kind, but near the end of the film, he happily threatens to “kill the children,” referring to the recently captured mutants. The company also employs a young clone of Wolverine, an even more brutal white man deliberately created “without a soul,” whom they cannot restrain from wanton killing.

The character of Laura, an escaped mutant child whom Logan grudgingly cares for after Gabriela’s death, is perhaps intended to be a bold Latina heroine, but she is so savage that viewers might wish for her to be killed in place of the white superheroes. Although she is often screaming, she refuses to speak throughout most of the film, apparently out of contempt for others. This antisocial attitude is further shown not only in her willingness to commit both petty and grand larceny, but in her constant willingness to kill whites; her murderous rage is apparent even given the minor provocation of being caught shoplifting. At one point she punches Wolverine in the face as he refuses to further risk his life for her sake.

Although Laura was created in a lab, this was accomplished using Wolverine’s genetic material, making him her father. Despite this family connection and his obvious suffering, she shows no sympathy for him until he is mortally wounded near the end of the film. Professor Charles Xavier, founder of the school which educated the X-Men, shows sympathy for and interest in her, but unsurprisingly she seems aloof from him as well.

Xavier is depicted as a nonagenarian who is becoming senile as a result of a degenerative brain disease. His condition causes him to have seizures, which activate his mutant abilities in such a way as to paralyze almost everyone around him. One such attack even killed several of his own X-Men several years earlier. This condition is somewhat controlled by medication, but Wolverine struggles to get him to take his pills on a regular basis.

The title character, Logan, both in his personal behavior and his interactions with others, represents the decrepit and self-destructive white man whose society is falling apart. He is obviously in poor health from the moment of his first appearance onscreen. He works in an unsatisfying job as a limousine driver and drinks heavily, even engaging in self-mutilation. Later in the film, he admits to contemplating suicide by using a special bullet he has saved for this purpose.

Logan’s interactions with Xavier are one expression of the decaying social fabric depicted throughout the film. The two are constantly in conflict, with the cynical Logan displaying very little concern for anyone, while the more idealistic old man still hopes to assist Laura, having faith in a rumored “Eden” where she will be reunited with other young mutants. Although Logan has accepted the position of caretaker for the old man, the lack of respect between the pair is striking.

A character called Caliban, who has been helping Logan in caring for Xavier, reinforces the image of the white man as weak and dysfunctional. Caliban is an albino who cannot be exposed to sunlight without being severely burned. In other words, his whiteness is a serious weakness, and indeed it is exploited by Donald in order to torture him into cooperating with Transigen against his fellow mutants.

In his interactions with Logan, Caliban expresses the frustrated desire to help the aging superhero, who is unwilling to discuss his personal problems. He observes that there is “something inside you that’s poisoning you,” but Wolverine refuses to discuss these things and storms out. Again, white men in the film do not have healthy relationships, nor are they physically healthy.

Ultimately, both Logan and Caliban knowingly cause their own deaths, although they do so in furtherance of the battle against Transigen. Caliban ends his life in the white equivalent of a suicide bombing while being held prisoner in a Transigen van. Logan injects himself with a dose of a drug which he knows will soon kill him in order to briefly make himself less vulnerable to bullets fired by Transigen’s soldiers.

At one point, Wolverine, Xavier, and Laura are run off the road in an accident which also leaves another vehicle briefly disabled. In a far-fetched bit of multiculturalist messaging, the other vehicle’s occupants are a two-parent black family who generously offer to feed and house the pair for the night. Being black, they must be victims of injustice, so in this case they are in conflict with armed white men who shut off their water without legitimate cause. Despite this, in their interaction with the mutants, this family provides the only example in the entire film of the kind of social interaction one might expect in a high-trust society.

All this may be a Third Worldist fantasy about the collapse of white society, but it is in line with the real-life failing social trust [3] that has been most famously studied by Professor Robert Putnam [4] of Harvard. Something similar can be said about Wolverine’s self-destructive tendencies; although it may indeed be pleasing to anti-white elements to see any type of harm done to whites, the spirit of the Western world has largely become one of self-harm [5].

Other than Logan and Xavier, the mutants depicted in the film are mostly non-white. When reunited with Laura in “Eden” near the end of the film, we see them laughing and smiling, in contrast to the old, dying, or dead whites we see otherwise. It is implied at various points in the story that both the mutants and Gabriela are hoping to surreptitiously cross national borders; the film casts illegal Third World immigrants as heroes.

Despite the effort made to present these multiracial heroes in a positive light, the implication that they represent the future can only be encouraging to those with the basest affirmative action mindset. Laura, as already described, is a monster with whom only sadists could identify. Her co-heroes are pre-pubescent children like her, but several of them are already seriously overweight. They express the spirit of an “adult” who still dwells upon the fantasy of being able to harm others with his thoughts alone, rather than on improving himself.

While leaving the theater, I overheard a degenerate describing how pleased he was to have been able to see people impaled by Wolverine’s claws directly, in contrast to the other X-Men films, in which the violence had not been quite as graphic. There is indeed a great deal of violence in the film, and it does appeal to the prurient interests of perverts. But, along with the depiction of the decaying fabric of society, it is also a warning of what is to come for Western man if he continues along his present course of elevating the brutal Third World above himself.