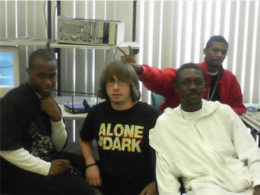 Imagine for a moment that you’re living in 2070-2090 or so, and liberal multiculturalism has completely triumphed in North America and Western Europe. There isn’t a young person alive who remembers white-majority societies or rule by governments that looked after the interests of white people (i.e., “fascism” and “white supremacy”). The average person harbors some vaguely anti-white biases and beliefs, though they aren’t a monomaniacal focus since white people are a minority and not all that threatening in daily life. They probably engage in “microaggressions,” though, and we all know how awful those are, right?

The elite, on the other hand, has made anti-whiteness a plank of their administration, taking the older paradigms of soft anti-whiteness from the earlier twenty-first century and bringing them to their logical conclusion. The problem of whiteness is their political enemy, the one that they need in order to justify their own role in society now that “equality” and “diversity” have essentially been maxed out. White privilege has become the eternal bogeyman in a society where the benefits of being white have evaporated in a multicolor haze. And the specter of white supremacy has become the easiest way to explain their failure to materialize a liberal utopia. (These claims are already made now, but in a future where anti-White forces have won, they will only be stated more intensely).

So what is going to happen to all the white allies, the white liberals, the complacent ones, and so on? Have you really thought this through? Do you really think (((the narratives))) you’ve unleashed and abetted are in your best interests? Is your desire to help the Other, whether for the purposes of virtue signaling or genuine universalism, so great that you will allow yourself to be sacrificed?

We can call it Cultural Marxism, or the regressive Left, or the intolerant Left, or any number of labels, but what the seeds of this will give rise to is an ever more vitriolic racism towards white people. You may smirk now and say there is no such thing as racism against white people because reasons, but this metapolitical and cultural meme will become increasingly dangerous as our numbers decline and we become both easier to attack and easier to generalize about.

Will you or your descendants be one of the “good white people”? Do you think that concept will even exist among people who’ve been trained to think for several generations that white people are responsible for nearly all forms of oppression and suffering in this life? Do you think fighting against stereotypes and “racism,” which are eternal fixtures in multi-ethnic human societies, will earn you a pass among the huddled masses of color yearning to breathe America’s golden air? Or will that other eternal truth be true, that minorities are always in a precarious situation, especially wealthy ones? (Which white people would certainly be.)

That white minority we have in our country is up to no good. They’re only wealthy because they enslaved and colonized bodies of color in the past, and even now they are still trying to do it all over again. They are nothing but parasites who live off the work of our diverse and vibrant nation. They are the reason why we haven’t achieved equality. If we do not stand against them, drive them out, and confiscate their wealth, they will continue to oppress us and plot to enslave people of color all over the world. We shall not be made livestock of international Hyperborean capitalism. They should all be sent back to Eastern Europe where they belong!

Funny, right? That’ll never happen. Incubating narratives of racism, no matter how small, can never blossom into popular, state-sponsored persecution of minorities over time. You can’t trace the development of extremist ideologies over time to tamer antecedents. Also, if you are concerned about that, it means you’re guilty of something and deserve what’s coming. LOL!

I don’t know how many white liberals are ever going to read this, but think very carefully about what team you are siding with, and what you’re consigning your descendants to. Do you really want them to inherit a world where blaming white people for all societal ills has been normalized, and in which white people have lost that “privilege + power” that prevented them from experiencing “racism”? Because let’s be perfectly clear here, you will never eliminate tribal behavior among humans within a meaningful time frame. It has been around as long as we’ve been documenting ourselves. All that will change is who is on what end of it, and how intense it is.

On the other hand, if all you’ll leave behind are some cats and a wine bar, nunnadis matters.

This essay [2] originally appeared at The Right Stuff.