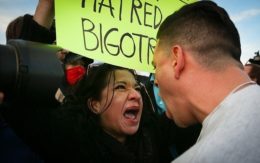 A few weeks ago, the town bum wandered into a local coffee shop. He began telling a table full of high school girls about the dynamics of urine.

“When you’re dehydrated, it’s a dark yellow color, but when you’re not, it’s almost like the consistency of water,” he said in many more words than this. He seemed very adamant that they understand him, as if he needed them to nod their heads in agreement. At first I thought I’d get up and tell him to leave them alone, but they smiled and seemed to relish in the opportunity to show kindness to one of the “least of these,” so I decided to ignore the ordeal.

A few minutes later, he shuffled over to me and started to deliver his unseemly lecture.

“I don’t want to hear it!” I interjected.

“Okay,” he said meekly, and shuffled off. I didn’t want to be mean, but I wanted to discourage him from delivering that manifestation of his mental illness, since it wasn’t exactly a crowd-pleaser. Plus, I was busy writing something on my laptop.

The platitudes which the Antifa spouts are about as enlightening as the bum’s bathroom observations.[1] In other words, we’ve all heard them before. But at least the bum cared about whether his audience understood him. Many Antifa seem to yell into the wind, “howling gigantic curses,” as Marx wrote in one of his poems.

The reason why they act in this way may have something to do with their personality type. INFP and INFJ types were found to be the most likely to be member of the Democrat Party in a study [2] from 2000. From this we may conclude that they are the most disposed toward Left-wing beliefs. Interestingly, INFJ and INFP also register high [3] on Enneagram Type Four, which is “expressive, dramatic, self-absorbed, and temperamental. [4]” If that doesn’t describe Left-wing demonstrators, I don’t know what does.

Observe this red-headed fellow [5]. He makes his oration as if in a trance. He channels some emotion from deep within and formulates it into a conspiratorial complaint. His comrades later sit around him, probably viewing his outburst as a manifestation of enlightenment.

It seems the Antifa and their ilk get a kind of psychological release from their antics. Certainly, their satisfaction cannot be intellectual because they seldom debate with ideological opponents. When they do, it ends up being nothing but a shouting match, with the Leftist doing most of the shouting. In short, Antifa and their kin are not the Left’s mind, but rather its heart – and sometimes its muscle. While it may be productive to try to debate a YouTube channel host like (((David Pakman [6]))), it’s hard to have a conversation with a member of the Antifa who is either screaming hysterically or trying to physically assault you.

Studies of Right-wing people’s Myers-Briggs types may help to explain their relationship with the Left. If we assume membership in the Republican party [2] circa 2000 to be a worthy proxy for Right-wing beliefs, then types INTJ and INTP are among the most likely to be Right-wing. INTJ and INTP also frequently register as Fives on the Enneagram Personality Scale. Type Five, the Investigator, is described as “the Intense, Cerebral Type: Perceptive, Innovative, Secretive, and Isolated.” For Fives, “Knowledge, understanding, and insight are . . . highly valued . . . because their identity is built around ‘having ideas’ and being someone who has something unusual and insightful to say. For this reason, Fives are not interested in exploring what is already familiar and well-established; rather, their attention is drawn to the unusual, the overlooked, the secret, the occult, the bizarre, the fantastic, the ‘unthinkable.’” If this doesn’t describe the typical Counter-Currents reader, I don’t know what does.

It seems that clashes between the Antifa and smarter members of our movement would resemble a conflict between Fours and Fives because, as stated earlier, the most Left-leaning types are INFP and INFJ, and they tend to be Enneagram Fours. According to Enneagram, “Fives can see Fours as bottomless pits of emotional needs who drain their time and energy. Fives also feel that Fours’ emotionality reflects a lack of rationality or is a sign of immaturity that seems potentially dangerous and out of control. Fours in the lower Levels do not seem safe because of their apparent instability. [Yes, Anfitas are in the lower levels.] Fours tend to be easily frustrated with the quality of attention they get from Fives . . . [Much of the modern Left is about getting attention for being a special snowflake of some kind.] . . . [T]hus they tend to provoke the Five until they get a response.” Maybe this is just confirmation bias on my part, but I find the similarities striking between Fours and Antifa striking. In any case, one need not despair if he/she is both a White Nationalist and INFP. As we will see in a future article on racial differences in MBTI types, whites are INFP relative to other races. Interestingly, Fours, which include many INFPs, have the need to “create an identity” as their basic desire. Richard Spencer must be speaking to them, and in a weird way, the white race at large when he tells them to “become who they are.”

In any case, regarding Antifa, we shouldn’t let them drag us down to their level. More importantly, we shouldn’t let them occupy too much of our time. (I know they’re occupying my time at the moment, so sorry for being a little hypocritical.) See, by attempting to take up our time, they’re much like the bum who wanted to subject me to his urine speech. With their compulsive antics, they are distracting us from doing important things.

White Nationalist views are scarcer in the marketplace of ideas than multiracialist ones. For example, even the corporations Antifas claim to hate promote multiracialism. Public schools and most parochial schools in America enforce diversity, from kindergarten through graduate school. The media churns out news events, TV shows, and films that disproportionately have a “non-white victim, white perpetrator” paradigm that leads whites to apologize to non-whites for alleged wrongdoings and rally to their aid.

Demonstrations in favor of multiracialism do not add much to the mass of material that already exists, but in contrast, our views add significantly to what most people know. Granted, most whites already implicitly agree with white separatism as they flee to the suburbs, vote for Trump, seek out “good schools,” or choose co-racials as dating partners, but they seldom hear white identity expressed in explicit terms. Pouring a drop in a nearly empty glass counts a lot more than pouring it into one that is already overflowing.

We therefore have a comparative advantage over the Left when it comes to sharing our beliefs. In other words, our events, protests, and so on go farther.

Although we don’t want to let the Antifa and their allies distract us from this task, it is still necessary to circumnavigate their attempts to block our free speech. It would be nice if a few good, strategic minds could specialize in dealing with them, so that the rest of us can focus on the message.

As a final point, our movement is filled with people who love speaking the truth, but who have a tendency to speak off the cuff, which may prove problematic if it leads to discussing evasive measures which are better left secret.

If you’ll forgive a sportsball analogy, we should be like Patriots coach Bill Belicheck, who stands nearly mum in front of the media rather than discussing a play and describing strategy that a future opponent might be able to cue in on. With this in mind, we can best aim to peacefully spread our message in a manner that spares us from having to deal with too many of the Left’s bums.

1. Speaking of Antifa and urine, Antifa members dumped urine on Matthew Heimbach during a demonstration in Washington, DC a few years ago, which tells us a bit about many Antifas’ overall sense of fair play.