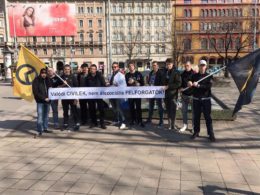 On Saturday, March 11, I had the pleasure of joining the members of Identitás Generáció [2] (Generation Identity), one of the two Hungarian chapters of the Europe-wide identitarian movement (the other being Identitesz [3]), in their first-ever distribution of food to the homeless in Budapest, adding to the rich and diverse tapestry of nationalist and traditionalist parties, groups, and activities that are flourishing in Hungary today.

This particular day was chosen because a conference was being held at a popular pub by the Hungarian branch of Amnesty International, as well as several other NGOs, in order to plan for charitable food donations to the needy. The identitarians were hoping to join the efforts of these organizations, both as a means of bolstering their logistical capabilities as well as a means of outreach from the Right to the Left.

Despite all their other differences, one thing the identitarians and these groups can agree on is that it is the current globalized neoliberal economic system that lies behind all the other problems which afflict not only Europe, but the world as well. Hungary, which is still struggling to recover from the difficult economic transition it made from Communism to neoliberal capitalism in the late 1980s and ‘90s, feels this problem particularly acutely. As such, Hungarian political parties often don’t fit easily onto the usual Left/Right political spectrum. The Communist Hungarian Workers’ Party, for example, is strongly anti-immigration and supports Syria’s Bashar al-Assad, while the Right-wing Jobbik is popular among both university students and workers, and opposes globalization. Thus, while such an alliance might seem strange to Western eyes, it is unsurprising to find such unconventional political thinking being proposed in Hungary, and it is a pleasure to see the identitarians seeking to form such new configurations as they look for innovative ways of combating liberalism and entering the mainstream.

At noon, about twenty of us gathered at Corvin Plaza, which is particularly symbolic for nationalists given that it was the site of the most intense fighting of the 1956 revolution against the Soviets, and memorial plaques and statues dot the site. Most of the volunteers were Hungarians, but there were a couple of foreigners besides me, including Counter-Currents author Michael Polignano. From there we marched, identitarian flags and banners unfurled and waving in the breeze, to the site of the conference, which was just a few streets away. Unsure of exactly what to expect when we got there, and knowing that some of the people at the conference were active with the antifa, we were warned not to allow ourselves to get drawn into violence.

Unsurprisingly, although the identitarians had contacted the group earlier to inform them of their intention of participating, we were met at the entrance by what appeared to be a handful of neo-hippies, who were clearly none too pleased that we were there. After a conversation between the identitarian leaders and these Soros-funded flower children, they made it clear that we were not going to be allowed in, although they did leave open the possibility that some sort of cooperation might be possible in the future.

The identitarians were allowed to give a brief speech through a megaphone at the entrance, outlining their principles and intentions while the peaceniks looked on nervously. To their credit, however, while they turned us away, they were nonetheless polite and cordial with us – a far cry from the sort of reception that one might expect from a similar group in the United States or Western Europe. I have noticed this sort of behavior before in Hungary, where members of Right-wing and nationalist groups are actually treated as human beings rather than as denizens of evil out to corrupt and destroy humanity. My general observation has been that even though some Hungarians might disagree with the Right, they rarely seek to remove them from social discourse or respectability altogether.

The identitarians had anticipated that this was the most likely outcome, so they had come prepared with sacks full of sandwiches and beverages of their own. Undaunted, we proceeded to march through the streets of the city center, stopping wherever we saw the less fortunate in order to give them what we had to offer, focusing on the squares and the metro stations, which is where the homeless tend to congregate.

It is a distressing sight, and one that is unfortunately all too common in Hungary, to see the large numbers of homeless who camp out in Budapest’s doorways, stations, and alleys all year round. While Budapest remains a beautiful city, I was shocked to learn shortly after arriving here that the average salary for a Hungarian is about one hundred and twenty thousand forints per month – that’s only four hundred American dollars. So it doesn’t take much misfortune for many ordinary Hungarians to be sent over the edge into abject poverty here.

Europe may no longer be politically divided, but a sharp contrast remains between the long-suffering peoples of the former Eastern bloc and the countries of northwestern Europe in particular, with their expensive social welfare systems and infrastructures. It’s therefore no wonder that the Eastern countries remain hostile to the idea of mass immigration from the Third World – it’s not merely culturally distasteful to them, but actually poses an existential threat to their economic well-being. (As should not come as a surprise to any nationalist, Hungary’s unemployment rate hit 4.9 percent in mid-2016, which is the lowest rate since the end of Communism [4] in 1989, and came shortly after Hungary chose to dramatically stand up against Brussels’ insistence that they begin taking in refugees.)

Everywhere we went, we were greeted by smiles once it became apparent that we were there to help. We spent most of the afternoon with them until we ran out of things to give away – after which we went for food and beer, and further camaraderie, to celebrate a day well spent. The time went quickly, as it really didn’t seem like a chore; although it’s a cliché, it is nevertheless true that helping others really is its own reward. As I’m sure many of the people reading this can relate to, the struggle for our people – meaning the peoples of Europe and their diaspora – is for me something abstract, for the most part, confined primarily to my computer screen and books. But in this instance, it was something living and immediate that I was involved in – and the positive effects could be seen immediately.

This is metapolitics at its most basic level – the simplest, and yet perhaps the most important one. I can’t think of many other groups of a Rightist orientation that are engaged in such efforts apart from CasaPound in Italy. But I think it is crucial that such groups begin thinking and working along these lines. It’s not enough for the Right to have a negative, critical stance. We’re already very good at telling people what we oppose. But alongside this we need to have a positive, constructive element as well. Bringing food to the needy is something that attracts people’s sympathies and shatters their usual stereotypes of Rightists as violent, unpleasant characters who talk loudly but accomplish little that tangibly helps anyone. Such charity could be an effective way of changing how we are regarded by the public at large.

Besides which assuming stewardship over one’s own people is really something that is naturally a Right-wing disposition. The liberal Left only views charitable enterprises as a weapon they can use to further erode the establishment that they claim to detest by exploiting its weaknesses. We of the true Right also seek to erode the establishment, but beyond this, it is a way of putting ourselves forward to help our own kin – not “humanity,” as the liberals would have it. Hungary is relatively homogeneous, ethnically speaking, but in other countries such as the United States, such aid could be targeted at specific communities. The potential for such activism to attract interest and good will is huge, I believe.

I have been told that Identitás Generáció plans to make this a regular event in the near future, and they are hoping to expand their reach as well. They are currently looking for other groups with which to collaborate on this effort. Hopefully, as more people hear about it, it will grow into something that will serve as an example for the Right not just in Hungary but across the world. I certainly applaud this fledgling group on their achievements thus far and wish them well for their continued success.