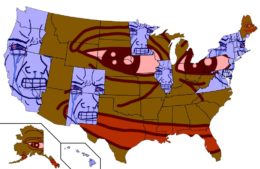 It happened. Against all odds, Donald Trump was elected President of the United States. The Great Meme War of 2016 was brought to a successful conclusion, and the enemies of (civic) nationalism found themselves dispossessed, frightened, and angry. Their impotent rage has continued into the current year, as protests against Trump have become an almost daily occurrence and the media’s full-court press against the President and his cabinet persists. The battle lines this creates are clear: shrieking shtetl-dwellers and degenerates along with their electoral clients of color versus most White people.

Take a look at any anti-Trump protest, pay attention to the ethnographic details of authors who pen anti-Trump screeds, and take stock of the people denouncing him daily on social media. It’s the coalition of the fringes, only now they’re being really loud and specific about what it is they hate.

It’s not as if they’d been keeping their hatred of these curses quiet, they just weren’t directing their anger at the executive branch. After all, they had their guy in the White House. Now things are different (but also not different!). The paradigm remains the same for the Left, but what gets framed inside it has changed.

One of the less intuitive examples of this is the CIA. The CIA, to put it bluntly, has been anti-Trump since Inauguration Day, withholding intel from someone who is nominally their boss. But many on the Left now speak highly of the CIA for “resisting” Trump. Let’s celebrate that unelected spooks are trying to undermine the President! Never mind that the CIA is behind the toppling of multiple Leftist governments in Third World countries over its history. Yes, that same CIA is now technically on their side, since the uniting feature of the neoliberal-Leftist alliance is opposition to European and American nationalisms (i.e., White people rejecting anti-White globalist institutions). The hatchet is buried because Trump is a doubleplus fascist. Anything can be overlooked so long as the immediate goal of “stopping” him is kept in focus. Highly, highly unprincipled to throw all that history under the bus, but it’s an attitude that has gotten them far.

Which brings us back to the discussion of Trump and the pro-White position. As a movement, at times the Alt Right isn’t even sure what that means, frankly.

The anti-white position is self-explanatory: white people must be prevented from exercising any form of self-determination since that would be bad for non-white people, who would lose access to our spaces. Case-in-point: attempts to delegitimize Trump as President (because he was elected by mostly whites and a majority of whites). Trump is not a White Nationalist, but they process him as one. The Left has this down, and they act on it like one big social super-organism. Speaking in a similar biology metaphor, Dilbert creator turned political blogger Scott Adams described the Left’s position as seeing Trump like a virus to be rejected by the body. To be anti-white, then, is straightforward, expelling the pathological white voter.

What does it mean to be pro-white? Is Trump pro-white? These are questions to which we need answers. Simple, meme-able answers.

I propose a simple threshold: does x counter the demographic, social, moral, and political decline of the white race? X could be anything: a person, a platform, a policy, a philosophy.

Here, x is Trump, so I would say yes. Doing anything to stop the flow of mostly non-white immigration, legal or illegal, as well as repatriate the illegal population counters the demographic decline, so that’s a plus. This comes among other things, like promoting nationalism and discussing the reality that there are enemies of “the people” (i.e. our people).

On the other hand, his nativism is totally insufficient. As much as we can say Trump is pro-white, we can quite plainly observe that his platform falls short. Short of what? This is an opportunity for us to fill in his failures. This is where the debate really begins. What is the ideal pro-white platform?

Typically, the two positions one sees most argued for on the Alt Right as solutions are White Nationalism or white supremacy. I shall give a brief overview of each here.
White Nationalists want a white ethnostate. Generally, the desired demographics are for it to be at least eighty-five percent European; many would say one hundred percent is the goal. Because of the problem resulting from the fact that this country is almost half non-white (and rising), the strategies floated are either to politically separate the white-majority areas from the rest of the country as an independent country, or to gradually whiten the whole United States through immigration, deportation of non-whites, increasing white fertility rates, and so on. White Nationalists will often (though not always) go to great lengths to distance themselves from explicit white supremacist ideologies (e.g. National Socialism, Neo-Confederacy) and hew to a nationalism-for-all-peoples principle.

White supremacists dispense with the idea that nationalism should be applied universally to white and non-white countries. In short, power rather than population is what confers the “right” to a territory. Supremacists see the non-white population not as something whites must geographically separate from, but something they only need to have power over legally and socially to manage successfully. If democracy and multiculturalism produced degeneracy, then it is reaction and caste systems that will reverse it. A society need not be entirely or even mostly white to be pro-white, only run in the interest of whites. Such is the general attitude of white supremacy, as distinct from White Nationalism, though both viewpoints agree that there should be a country for white people.

Since diversity leads to conflict, however, white supremacy guarantees more conflict than White Nationalism in theory. The ethnic or racial homogenization of society is not as essential a goal for supremacists as it is for nationalists, meaning there will be larger permanent minority populations to be managed. The refusal to yield territory regardless of who possesses it in numbers mainly comes from the South (which ethnonationalists tend to view as too African for a White ethnostate), as does much of the rest of the supremacist worldview, being a direct continuation of the country’s founding. In practice, though, the typical White Nationalist agenda of balkanizing the United States is also surely a recipe for conflict. Normies do not like conflict unless they are left with no choice, and as of now they have plenty of choices.

The Left already believes America is a “white supremacist capitalist patriarchy” anyway, so formal white supremacy may actually be less far-fetched than you might think. But they also believe nationalists are indistinguishable from supremacists. This is obviously not the case, otherwise the racialist Right would be much less fractured. And since neither nationalism nor supremacy are within immediate reach, many of the debates are purely figurative.

Jewish nationalism and Jewish supremacy in Israel (and in the United States) are a good example of how our longstanding opponents have overcome the nationalism versus supremacy dispute. Generally speaking, Jewish nationalists live in metropolitan, majoritarian Israel, while Jewish supremacists live abroad as minorities, whether as colonizers in the West Bank or as a nation in a nation elsewhere, in places like the United States, Britain, and France. Both agree upon the necessity of having a “Jewish state,” that is to say a pro-Jewish state with a Jewish majority. Each, however, has sought to live in spaces which they prefer, while largely remaining allies. Their chief adversaries are the more cosmopolitan Jews, who prefer their own racial suicide to appearing “racist.” But such people do not run Israel, because the nationalist-supremacist coalition overpowers them.

Trump is neither a White Nationalist nor a white supremacist; he is a civic nationalist who respects the United States, and somewhere between a Jewish nationalist and a Jewish supremacist regarding Israel. Most of his supporters (i.e., the normies) are likely similar ideologically. They are not opposed to multiculturalism on the basis of tribe; they’re anti-Islam, against illegal immigration, and “tough on crime.” These are necessary, but insufficient.

Civic nationalism is anti-white in the long run since it is not based upon a rooted, organic identity of explicit whiteness. For now, it is implicitly pro-white since, the United States has a white majority. But this will change under a civic nationalist government that does nothing to either substantially increase the white portion of the population or permanently establish white rule. And since normies are not concerned with that, civic nationalists elected by them will not be terribly interested in it, either.

But remember, the same anti-white coalition treats civic nationalists as if they were White Nationalists and supremacists (both also being equated with one another). What this means is that collaboration should be obvious. Our numbers are . . . thin. For now. All stripes of pro-white thought, from the Alt Lite to National Socialism, are going to be hanged together if none succeeds.

Does x counter the demographic, social, moral, and political decline of the white race? If so, the powers that be want it crushed, and it is the most important thing for us to advance as a united front. Civic nationalism, Kek willing, is merely a phase. The next stage of the meme war is to phase it out and normalize explicit whiteness. That’s step one for any pro-white program. Because until we get to that point of consciousness, it will be exceedingly difficult to solve any of the problems facing our people, and our nation will remain a proposition.

This essay [2] originally appeared at The Right Stuff.