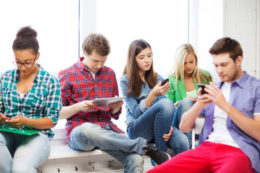 In our increasingly consumerist society, there is a growing desire for all things to become more quick, predictable, and satisfactory. This is perhaps most obvious in the development of fast-food and fast-food culture. A typical trip to McDonald’s is expected to proceed rapidly. Once at the counter, you don’t need to explain your order in detail. “Number four, large.” You swipe your card. You get your meal. You walk out. You get in your fast car, take the fast highway, take the fast lane, and turn on your radio to zone out to “top hits” music that was produced quickly and efficiently. The songs are brief enough to not be too boring. The verse, chorus, verse, chorus, bridge, chorus: all as predictable. The electronic instruments and synthesized voices go in one ear and out the other, as billboard after billboard passes before your eyes.

Social media plugs one into a spotlight for millions of potential “friends,” feeding the ego at an unprecedented speed. People thumb their smartphones on Facebook, viewing one “viral” video after another, produced by “content creators” who name their companies in predictably appropriate ways: NowThis, Buzzfeed, In the Now, Wired. “This is cute.” “This is sad.” “This is inspirational.” “This is weird.” “This is cool.” One after the other, minute after minute, the mind consumes and then quickly forgets. The user posts a selfie to appear on the light-speed “feed” of his or her “friends” in hopes that his many ghost friends will click the precious ego button. Perhaps afterwards, he will view some memes featuring a few lines of text, and with a chuckle, thumb away to the next meme.

What is most disturbing is that while all the generations in our society have converted to Internet life, the fact is that the majority of people were not raised with this phenomenon. We are not all “converts.” Millennials were the first to be raised by the Internet, and the results have been a severe magnification of the lightspeed-consumer mindset. Most importantly, this mentality has completely changed the means by which culture is propagated, as well as the nature of political strife. Yes, there has been a steady increase in the demand for “results” in generation after generation. But with the Internet, we have witnessed the birth of a generation incapable of pausing.

Civil argumentation, philosophy, book reading, all of these things are dead or dying. Philosophy has no place in a world that demands immediate results in response to instinctive, primal desires. Anything which makes one uncomfortable or presents a challenge is immediately discarded. Self-denial is slowly becoming immorality in the eyes of the contemporary West. To deny our instinctive impulses and primal desires is to question the notion of immediate satisfaction, and long-term gratification is becoming more and more alien. Watch how the individual who chooses not to participate in social media is treated; almost as a Martian. He is thought of as strange, or even untrustworthy. After all, only a complete weirdo wouldn’t want to be plugged into a machine pumping us full of egoism at high speeds.

The more bourgeois we are, the more common it is for this to happen. Trust-fund students who have never worked a day in their lives are commonly ignorant of a reality which ever slows down or pauses. As such, their moral codes and behaviors follow a mind raised on NowThis. A controversial idea (or speaker) is not met with open debate or inquiry; it is to be chanted at, screamed at, cried at, or attacked. The primal emotions overwhelm, and (as expected) satisfy. Speakers who have confronted these mobs ought to know better than to try and use well-constructed argumentation. One might as well be trying to teach Japanese to a dog. You’re here, you’re controversial, and they can make loud noises. The dominos for a primal masturbation of emotions are all in line. Nothing else matters.

The future is one of fast-politics. It is a primal and ugly future. The hearts and minds of the younger generations will not be won over with scholastics, philosophy, or esotericism. It will be won with primal strategies. This is why people like Milo, Gavin McInnes, Paul Joseph Watson, and their like have been so successful among the young, for better or worse. They either understand the game, or they are embedded in the game. In Gavin’s case, I assume that he understands the game, and plays its tune. Vice follows the same steps for media success: topics need to catch the eyes quickly, frames need to change quickly, and documentaries need to end quickly, with only the juiciest bits intact.

All aspects of this rising new movement against the status quo need to understand how the future is to be won, and for better or worse, adapt to the contemporary strategies of political and cultural strife. Sophistication will not win the future. Philosophy will not win the future. Esotericism will not win the future. The future will be won with effective memes and viral videos. If you as a member of this movement can’t stoop to this level, you’re not here to save Western civilization. You’re here for yourself. The time has come to break the emergency glass, make use of every method, take no prisoners. Learn how to appease the unpaused, and the future is yours.