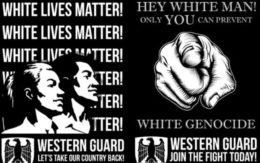 I am perplexed by the issues you raise in recently reported statements in the news media in regard to the formation of Western Guard [2]. Similar perplexity was aroused with such statements you made in response to a planned Auckland University European students’ heritage club [3] a few weeks ago, which was aborted due to harassment and threats of violence.

I am not a member of either group, nor have I had any communication with them or know the people involved. I am merely responding to your recent comments [4] as reported in the media; that is:

“Aside from the racism issues, it’s just full of hate and vile,” she said.

“There’s no doubt that we are seeing a rise in hate speech, or at least in people telling us about racist attacks. We can’t deny that what is happening around the world is impacting us in New Zealand.

“That’s why people need to take a stand against these things. We are looking at the statutory limitations, we are reviewing the legislation. All of the things around the Bill of Rights Act are very limited and seldom reach the threshold [for prosecution].”

Netsafe director Martin Cocker said the group’s statements did not breach the Harmful Digital Communications Act because they did not threaten harm to any individual.

“In this case you have something which is harmful to groups, and therefore it becomes a matter for other laws such as censorship law.

Dame Susan, you seem to be suggesting an amendment to the Human Rights Act in regard to dealing with alleged “hate speech.” Previous legalisation existed in this regard. If I recall correctly, this was sections 9 and 25 of the Race Relations Act of 1971. They were abrogated as unworkable. Any questions raised concerning ethnic relations and immigration other than those following a liberal agenda were liable to be subjected to a barrage of complaints to the Office. You can presumably imagine the waste of time and resources, since something like “hate speech,” or as it was then termed in the Act, “exciting [sic] racial disharmony,” is often highly subjective. The legislation existed primarily as a vexatious resort by those who had a political axe to grind. Hence, the Race Relations Office was manipulated by those with an agenda. Now, it seems to me that this is the regime to which you wish to return (?).

Having been prompted by curiosity to look at the Websites of Western Guard and the previously aborted European students’ club, it seems to me that your comments describing the WG site, and basically the same terminology used to defame the students’ club, are subjective and not appropriate for a tax-funded public servant. You claim that the message of WG is “full of hatred and vile”; ipso facto, does this imply that such references as “white lives matter” are regarded as hateful and vile? Does the same criteria apply to “black lives matter,” for example? The implication is, as suggested by WG, that there are indeed those in positions of influence throughout the Western world who really do believe that “white lives” do not matter, and that you would be one such person.

Should the nebulous concept of “hate speech” be reintroduced into New Zealand legislation, this will indicate the intellectual and ideological bankruptcy of the multicultural proposition, which will have been shown as incapable of sustaining debate. As it is, and has long been, there is already no real debate. The reflexive reactions of those such as yourself and the Auckland University students’ association and sundry journalists, indicate this.

However, legislation on the loaded term “hate speech” will serve to provide state sanction to the bigotry that already exists in regard to any opinion deemed pro-European or in some way critical of multiculturalism. An objective assessment of such issues requires a wide range of historical knowledge which neither you nor anyone else that has condemned WG and the prior European students’ club, seemingly possess. Your answer is to outlaw such opinions, while the response of those who share your opinions on WG seems to comprise, based on the Facebook postings, with expletive-ridden abuse and threats.

When the state legislates to outlaw matters of opinion peacefully expressed, then it is elevating a policy into a dogma, and opposition becomes a heresy. That this has long been so in regard to issues such as multiculturalism is evident. However, your suggestions in regard to changes in the law make it blatantly so, and surely confirm the contentions of groups such as WG. In regard to questions of violence and abuse, there are of course other laws that deal with such matters. If someone regards slogans such as “white lives matter” as intrinsically offensive, then that surely indicates a certain anti-European bigotry on the part of the supposedly offended party. It could be argued that being offended by a slogan as “white lives matter” is itself offensive, and indicative of race-hate.

The reactions of yourself and others in condemning such small responses to big problems as “hateful” and so on seem to be of the character of “projection,” psychologically speaking.  The targets of your wrath do not seem to have displayed anything other than relatively mildly worded opinions in favour of European heritage. Presumably you and your “type,” as it can be called, would not be satisfied with anything less than to be able to stifle anything expressing a pro-European attitude. If correct, this begs the question as to whether such groups as WG are correct in their perception that there really is an agenda among people of influence to obliterate any conception of European identity, while lauding and applauding the sundry identities of every other ethnicity; in short: hypocrisy and Europhobia.

Again, to refer to psychology, when something is repressed, it simmers and eventually boils over into extreme and destructive forms that might otherwise have been sublimated into something positive. Carl Jung made this point and gave this warning, when addressing the reasons for the rise of Hitler as a manifestation of centuries of repression of the German collective unconscious.