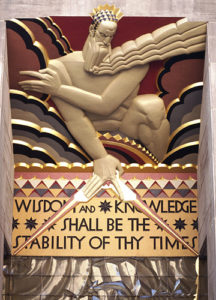 Last weekend, on Saturday, January 28th, Counter-Currents held the fourth meeting of the New York Forum in New York City. All told, 52 people participated in the Forum and/or the dinner after. I was the Master of Ceremonies, and there were four speakers: Emily Youcis, Jason Jorjani, Jerome Przybylski, and Paul Kersey.

The talks were excellent. Spirits were high throughout the event and during the dinner that followed. At one point we had exchanged fraternal greetings over speakerphone with the Atlanta Forum, which was being held on the same day. After dinner, some participants even went to troll Shia LeBoeuf’s “Heebs will not divide us” (or something like that) “art” installation in Queens, encountering Sam Hyde and a number of Alt Light people who were also trolling the installation.

This year, Counter-Currents is organizing six New York Forums (on the odd-numbered months) and six Northwest Forms (on the even-numbered months). If you are a movement activist or content creator and are passing through New York City during those months, please contact me if you wish to speak at or simply attend the Forum. The same goes for travelers in the Pacific Northwest.

The Forums are private, invitation-only events that create a safe and welcoming space for dissidents to network and exchange ideas. Even though organizing these events is time consuming and stressful, I always return from them with renewed energy and enthusiasm.

Each forum lasts from noon to 5 pm on a Saturday and typically features four sessions for speakers and panels.

The next Northwest Forum will be on Saturday, February 25th. Kevin MacDonald will be the principal speaker.

The next New York Forum will be on Saturday, March 25th.

If you wish to be considered for an invitation to either event, contact me at [email protected] [2] for extreme vetting.

One of the ways that Counter-Currents can support itself while offering free content on the Internet is through embedding affiliate marketing and advertising links on the site. For a while, Counter-Currents was bringing in thousands of dollars a year through Amazon Affiliate links, until the Southern Poverty Law Center got Amazon to drop us for purely political reasons.

After Amazon dropped us, we started placing Google ads throughout the site. This brought in a lot less than the Amazon program, but it still added up to several thousand dollars a year. (Which is not a negligible percentage of my very limited income.) This week, however, Google dropped us from their program for purely political reasons.

One of the techniques of soft Leftist totalitarianism is the adoption by corporations of “terms of service” agreements that give them a pretext to censor and discriminate against White Nationalists and really anyone else to the right of Leon Trotsky.

The goal of denying us access to these sorts of programs is obvious: the SPLC and other hate groups wish to put us out of business. And if this happens enough times, they will succeed.

The only long-term solution to this sort of corporate censorship is to nationalize Amazon.com, Google, Twitter, Facebook, and similar platforms so they cannot censor ideas on political grounds. At the very least, they should be declared public utilities and regulated as such.

But that does nothing to make up for the immediate reduction in Counter-Currents’ income. Thus if you were thinking of making a donation to Counter-Currents, this is a good time.