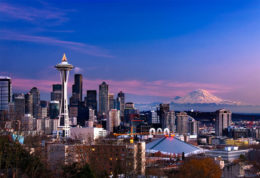 Last weekend, Counter-Currents sponsored the second meeting of the Northwest Forum in the Puget Sound area. The main speakers were Kevin MacDonald, who spoke on morality and moral signaling, and Jack Donovan, who spoke about violence in modern culture. We also heard from local activists, including a panel by members of the Cascadia group, which played an enormous role in the success of the event.

The Forum proper took place on Saturday the 25th from noon till 5 pm. There were 72 people present, a significant increase over the first meeting in November. Two more people joined us at dinner that evening, for a total of 74. The desire for fellowship, however, could not be confined to the Forum and dinner. Thus on Friday the 24th, there was a house party for Forum guests which attracted more than 50 people, and on the following Sunday, we had a lunch which attracted 30 people. Three people joined us at the party and the lunch who could not come to the Forum itself, making a total of 77 participants over the whole weekend.

The ages of participants ranged from 5 to 73. There were 12 women and 65 men. The average age was about 30. Participants brought their wives, girlfriends, children, and even parents along. Most participants were from Washington state, but there were substantial contingents from British Columbia and Oregon, and a handful of people from Idaho and California. We will have the text and audio versions of Kevin MacDonald’s talk in the coming days. Also, there will be a special episode of the Northwest Imperative podcast on the recent meeting at The Right Stuff.

I want to thank Kevin MacDonald, Jack Donovan, and the other speakers; the volunteers from Cascadia; and everybody who attended for making this gathering such a success.

Metapolitics is not just about spreading ideas. It is also about building community. Our Forums do both. It is a model we hope to perfect and spread throughout North America.

If you value our work at Counter-Currents, please donate. As with most dissident ventures, book and ticket sales only cover about half of our costs.