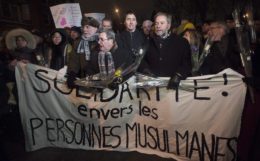 The art of politics in the modern age seems to be about holding up the worst representative of a rival group to define that group. Rather than just comparing groups, as Herrnstein and Murray do in The Bell Curve [2] or as the American Renaissance publication The Color of Crime [3] does, the media seems to want to play a game of tag.

In this game, the latest person to commit a mass shooting or terrorist attack is held up as the quintessential member of his group. That group is now “it” and must defend itself in light of the tragedy. For example, users of the Confederate flag became “it” after the Dylann Roof shooting. Muslims became “it” after the Orlando massacre. Now it seems anti-Muslims are “it” following the recent massacre in Quebec.

This game is a vain endeavor. The fact that a member of a group commits a terrorist attack should not vilify the entire group, because all groups have crazy people, even the Chosen People (most notably Baruch Goldstein [4]). The only reasonable comparison to be made is a per-capita one, specifically, how likely a group member is to commit a bad deed, which somewhat reflects on the group’s overall profile. However, media outlets routinely opt for comparing the misdeeds of the white majority with those of minority groups to make the latter appear less likely to do evil. By eschewing per-capita standards, the media capitalizes on the fact that the average reader scans only for headlines and does not dig deeper to discover the misleading nature of the articles. There is a kind of asymmetry of information which the press cynically exploits to further an anti-white political agenda.

Avoiding per-capita reality is misleading, but playing the game of “tag” is even worse. For one, it puts things in a context which normies can understand, but which doesn’t actually reveal any truth. A normie is tied to a very basic, human-centric environment. He can’t conceptualize ratios, statistical likelihood, and so on. But he understands a story about an individual shooting at people. Thus, he can be spooked by the scary story and sleep a little less soundly after he thinks about it. He can be influenced to vote a certain way or to think a certain way. There is absolutely no rational assessment of anything involved in such an assessment. It is all based on fear. An accurate understanding of the risks posed by the group in question is entirely lacking.

Even comparing terrorist attacks doesn’t give one the whole picture. When comparing groups, it is better to make use of a holistic conceptualization rather than tally its members’ worst deeds. By this method, it becomes clear, in light of the prevalence of white flight, that whites are happiest living among people like themselves. The trouble is that non-whites also want to live near them, thus creating friction between whites who want to be left alone and non-whites who want to be around them (or at least become part of their economies).

Granted, if whites had a country of their own, it would not be a utopia bereft of all mass shootings. It’s possible that the Quebec shooter, if he lived a century ago in a nearly all-white Canada, might have opened fire for other reasons. For example, perhaps he would have been a Marxist shooting up a meeting of capitalist factory owners. However, if diversity leads to an increase in the number of mass shooters, then it’s possible that he is one of the marginal people who would not have committed an act of violence had he lived in a non-diverse environment. Whether there would be fewer mass shooters in an all-white country is debatable, but what is certain is that the people’s overall quality of life would be better. Whites prefer cities bereft of rampant violent crime and an economy which doesn’t have to bear the deadweight of affirmative action.

While it would be ideal to focus on a narrative involving a whole culture, at the very least summaries of per-capita wrongdoing such as The Color of Crime show that a white/Asian nation is better in many respects than a multicultural one. But, alas, the media controls what normies hear on a daily basis. Sometimes the drudgery of the ongoing game of tag might even upset one of them so much that he turns to a White Nationalist site for a more intelligent viewpoint. He might even start down a path which leads him to lose his normie identity. And that’s why I’ve written this article, as an act of judo (or rather jujitsu, to be technically correct) using the media’s focus on the Alexandre Bissonnette shooting to hopefully lead white people to a better understanding of the type of society in which they will be happiest.