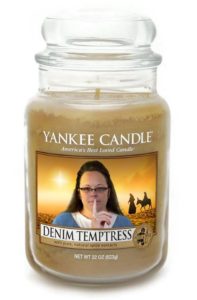 Since I believe in witchcraft [2] (and have practiced it for years) I will admit that my heart skipped a beat when I heard that witches were planning to perform a worldwide spell to stop the God-Emperor. So far this story has been covered by the BBC [3], The Daily Mail [4], The New York Post [5], and other outlets. No word yet from The National Enquirer.

Here is the gist: encouraged by one Lana Del Rey, a singer of whom I have never heard, witches around the world pledged to cast a binding spell against Donald Trump at midnight on Friday, February 24. The call went out for witches to surround Trump Tower in New York, where they would link hands around the building and hex our forty-fifth President. Their voices were to have risen to the heavens, where the clouds would have parted and re-formed into ominous patterns amid much thunder and lightning, à la Ghostbusters or, perhaps, Raiders of the Lost Ark.

But it was not to be. Apparently, only a handful of witches showed up. They squatted on the pavement outside the building and had quite a lot of difficulty getting their shit together before actually coming round to the spellcasting part. (Surprisingly, liberal witches do not seem to be that well organized.) You can see a video of their ineptitude here [6]. You have to give this one a chance. It takes these ladies (and a few gelded males) a while to get going, but once they actually begin chanting it becomes a hilarious cacophony of crazy cat lady and barren, brittle feminist voices. Ending with the impotent, nasal whimper of “So mote it be!!”

In case you don’t know, a binding spell is a spell designed to bind someone: to stop them from acting in a particular way; usually to stop them from doing harm. My landlady, an accomplished witch, taught me a very effective binding spell years ago, and I have used it several times with much success. (Thus confirming the old adage of ancient Roman witches, post hoc ergo propter hoc.) I will not print my binding spell here, as one doesn’t share that sort of thing indiscriminately. It would violate the witches’ code. But these liberal crones apparently have no such qualms and have published their spell in its entirety. You can find it here [7]. It is amateurish, to say the least. One of the anti-Trump witches ritually burning the only dollar she’s ever made from her self-published book of spells.

But can it actually work? I will surprise my readers by saying that, yes, of course it can. The major reason why most people are skeptical about witchcraft is because they think it absurd that sticking a pin in a candle and lighting it and then saying a few corny words is actually going to change anything. Literally, they are correct. Candles (even orange ones) can’t do magic. But people can – some people. In the hands of the right person, a spell becomes a powerful technique. The elements in a spell, which seem so absurd and arbitrary to the rational mind, are there to awaken the imagination – which is digging a lot deeper than consulting the rational mind. “The imagination is the key to the occult,” said Israel Regardie, Aleister Crowley’s personal secretary. The imagination is our way into a depth of being that transcends the ordinary space-time relations absolutized by reason. In this depth, it becomes possible to alter reality in order to bring it into accord with the will, in an unmediated fashion (or, at least, in a fashion that does not employ any mundane, familiar mediation).

So, if you have followed me so far, you may now be fearing for Trump. Should we catch and burn these witches? (Witchfinding is easy these days, thanks to Facebook.) Fear not! For recall I said that only in the hands of the right person, spells can be effective. Liberal witches, in fact, are quite powerless to work any magic. To put things in technical terms, the reason is that they haven’t got any mojo.

Mojo comes from being connected to what is, in the scariest possible way. It’s not just facing facts, but facing the abyss. The terrible, yawning gap from which all things flow. The eternal sucking gorge of the void. Which is also the Sun. It is the Great Beast. It is Time, destroyer of all, come to consume the world. It is Alpha and Omega. It is the infinite, striving Will. It is Will to Power. It is the Indefinite. It is the exalted flow of the space-time continuum, save that it is spaceless and timeless [9]. It is also the meaning we glimpse in sex (good sex; and liberals do not have good sex).

To have mojo means to be at peace with this horror. Really, to be one with it – so long as one recognizes that “I” am going to be thoroughly wiped out, leaving just a grease spot on the floor. (And actually this has already happened to “me” an infinite number of times.) Having mojo opens our eyes not just to the beyond, but to the here and now. Yes, it’s a perception of the “unity of all things,” but in contrast to what the wet mystics say (the phony, gooey mystics) it makes us keenly aware of difference. It is impossible to commune with Abraxas and believe in equality. Everything is inequality, hierarchy, and power. Life is violence and destruction. It is the continual clash of other against other. The continual clobbering of the weak by the strong. Dominance and submission. Wet work without end, in which we must partake joyfully.

And this is why liberals can’t work spells. They are set in opposition to life. Their minds are like heavy clouds full of icy water: baggy, unformed, floating over the abyss, now and then tinkling cold, lifeless streams into its vast, uncaring infinitude. Desperately seeking more altitude, more distance between thinking and being; terrified of getting sucked into the real. The liberal philosophy is a radical denial of what is. They have no blood and they have no bones, and the gods do not listen to them. Really, the destiny of liberals is to be scraped off the bottom of somebody’s boots. They are losing – quite entertainingly [10] – the political war. And they do not have what it takes to wage an occult war. So, fear not for the God Emperor!

But, oh boy: what if we should choose to wage an occult war on them? Liberals should consider themselves lucky that very, very few Right-wingers are going to take this essay seriously.