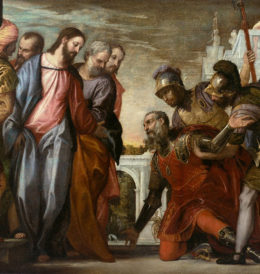 (Note: Miles is Latin for soldier.)

There’s a reason you’re not supposed to use the Devil’s name. No sooner does Counter-Currents publish a review [3] dealing with the Great Purge-Meister Buckley than the MSM, including outlets like Salon that are happy to publish outright defenses of pedophilia [4], was shocked, just shocked, to discover some interviews in which Milo made some comments about pedophilia which, when stripped of their obvious intent to offend, reduce to these anodyne propositions:

Now, in the first he is merely agreeing with the British Parliament [5] (he is a Brit) and the majority of American states [6];[1] while the second is a subjective report, which if true is interesting and if false is delusional. Understandably, though, people don’t relish stories of pedophilia with a happy ending.

What struck me about the dust-up was that, having recently begun to reacquaint myself with the New Testament, it seemed a perfect opportunity to explore what conservatives are always claiming they care about: what would Jesus do?

Because, unlike the necessarily ad hoc and arbitrary results of an attempt to obtain contemporary advice from an ancient book of fairy tales, here we have a pretty clear incident to go on.

I refer to the incident of the Centurion and his Servant [7].

In Matthew, we read:

When Jesus had entered Capernaum, a centurion came to him, asking for help. “Lord,” he said, “my servant lies at home paralyzed, suffering terribly.” Jesus said to him, “Shall I come and heal him?” The centurion replied, “Lord, I do not deserve to have you come under my roof. But just say the word, and my servant will be healed. For I myself am a man under authority, with soldiers under me. I tell this one, ‘Go,’ and he goes; and that one, ‘Come,’ and he comes. I say to my servant, ‘Do this,’ and he does it.” When Jesus heard this, he was amazed and said to those following him, “Truly I tell you, I have not found anyone in Israel with such great faith. I say to you that many will come from the east and the west, and will take their places at the feast with Abraham, Isaac and Jacob in the kingdom of heaven. But the subjects of the kingdom will be thrown outside, into the darkness, where there will be weeping and gnashing of teeth.” Then Jesus said to the centurion, “Go! Let it be done just as you believed it would.” And his servant was healed at that moment. (Matthew 8:5-13, NIV)

As is so often the case, there is a parallel account in Luke:

When Jesus had finished saying all this to the people who were listening, he entered Capernaum. There a centurion’s servant, whom his master valued highly, was sick and about to die. The centurion heard of Jesus and sent some elders of the Jews to him, asking him to come and heal his servant. When they came to Jesus, they pleaded earnestly with him, “This man deserves to have you do this, because he loves our nation and has built our synagogue.” So Jesus went with them. He was not far from the house when the centurion sent friends to say to him: “Lord, don’t trouble yourself, for I do not deserve to have you come under my roof. That is why I did not even consider myself worthy to come to you. But say the word, and my servant will be healed. For I myself am a man under authority, with soldiers under me. I tell this one, ‘Go,’ and he goes; and that one, ‘Come,’ and he comes. I say to my servant, ‘Do this,’ and he does it.” When Jesus heard this, he was amazed at him, and turning to the crowd following him, he said, “I tell you, I have not found such great faith even in (((Our Greatest Ally))).” Then the men who had been sent returned to the house and found the servant well. (Luke 7:1-10, NIV)

I quote both because there is a very interesting sleight-of-hand going on in most modern translations, including the NIV used here.

Christians usually take offense at being referred to as endorsing a “slave religion,” but the fact is that the early Christians, at least, were quite happy with the idea of slavery, at least metaphorically. Paul is proud to call himself “a slave of Christ” repeatedly, for example. The basic idea is that one has ceased to be a slave . . . to sin, and instead moved into the higher (though perhaps not comfier) realms of a slave to Christ or God.

On the other hand, modern PC Christians also find the word uncomfortable. And indeed, antique slavery was rather different from the sort of Roots image it calls to mind today. And so the tendency has been to use the rather anodyne word “servant.”

In Luke, the word translated as “servant” is entimos doulos, which means “honored slave,” a sort of “house Negro.” Matthew uses pais, which Matthew Nederlanden notes [8] “produces a nice play on words with the Greek word for paralysis.” He then says that:

At the time, pais, a term of endearment, could mean one of five things:

I think you see where this is going. Although there are tamer connotations, James Neil has pointed out that it would seem odd for a Roman centurion, the very model of a Tough Guy, to be so concerned about a mere slave (remember all those bad connotations of slavery, right?) as to seek out a Jewish miracle worker to cure him.[2]

So, here we have Jesus confronted with a pagan, a bloodthirsty soldier, a Roman oppressor, and quite likely (as they so often seem to go together) a practitioner of pederasty.[3]

What does Jesus do?

It would be useful to contrast this with the Woman Caught In Adultery. We often hear it said, more or less ingenuously, that one must “love the sinner but hate the sin.” Thus, Jesus tells the woman’s would-be punishers that the one throwing the first stone must be without sin. As they slink away, Jesus tells the woman “Go, and sin no more.” He’s pretty clear: adultery is a sin, and she is a sinner; going forward, she must sin no more.

With the centurion, however, Jesus’ attitude might be called sovereign indifference. There is not a word about the sin or sinner, if such they be. Instead, Jesus marvels at the faith held by the man. Throughout the New Testament, Jesus is stymied by Jews who are uncomprehending or hostile; even his own disciples betray him (Judas), deny him (Peter), and doubt him (Thomas). And yet here is a Roman, a goy, who gets it!

Jesus is not the Jewish Messiah, come to overthrow the Romans and establish the Pax Judaica.[4] As Max Stirner says, he is not interested in revolution, but insurrection; not external change, but change that at least starts from within.[5] He associates with gluttons, drinkers, tax collectors, and whores, much to the disgust of the (literal) Pharisees. The physician (like Luke himself) must go where the sick are to be found; what matters is that they have the faith with which anything is possible.[6]

My moral being that Milo is someone who gets it. What’s “it”? They hate us, and want us to die, and we will, if we don’t stop Them.

Rather than virtue signaling and morally panicking at the slightest lifting of an eyebrow by Those who are themselves hardly paragons on the subject (indeed, “first stone,” MSM?) but are certainly mortal enemies of our side, we should in such circumstances rather be “as wise as serpents.” Let us make common cause with those who share the faith. Sufficient unto the day is the evil thereof.

After all, if They do take over, the children will hardly be any safer, right?

Of course, as with all Biblical exegesis, your mileage may differ.[7] Perhaps it would be best to let Jules have the last word, as he usually does.

Now . . . I been sayin’ that shit for years. And if you ever heard it, that meant your ass. You’d be dead right now. I never gave much thought to what it meant. . . . But I saw some shit this mornin’ made me think twice. See, now I’m thinking: maybe it means you’re the evil man. And I’m the righteous man. And Mr. 9mm here . . . he’s the shepherd protecting my righteous ass in the valley of darkness. Or it could mean you’re the righteous man and I’m the shepherd and it’s the world that’s evil and selfish. And I’d like that. But that shit ain’t the truth. The truth is you’re the weak. And I’m the tyranny of evil men. But I’m tryin’, Ringo. I’m tryin’ real hard to be the shepherd.[8]

1. Long before “gay marriage,” the Commonwealth of Massachusetts decided to let girls marry at 12.

3. More likely, ephebophilia, which is well within the 16-year limit, but since no one wants to bother with such distinctions, we’ll let it stand. That a Roman pederast at this time would be romantic enough to be distraught at his boy’s illness is consistent with a shift in Roman culture under the influence of the Greeks. Conservatives and Traditionalists who purport to revere the Romans should take into consideration that traditional Roman culture was essentially what feminists today call a “rape culture,” in which male citizens could basically do anything they wanted with women, slaves, or children. See Neil, op. cit.

4. Of course, Luke was himself likely a gentile, and was writing for a gentile audience soon after the Neronian persecutions, so he is likely to be emphasizing the non-treasonous aspects of the religion. See The Human Bible New Testament; translated and introduced by Robert M. Price (Cranford, N.J.: American Atheist Press, 2015); reviewed here [11].

5. “He was not a revolutionary, like Caesar, but an insurgent: not a state-overturner, but one who straightened himself up. . . . [Jesus] was not carrying on any liberal or political fight against the established authorities, but wanted to walk his own way, untroubled about, and undisturbed by, these authorities. . . . But, even though not a ringleader of popular mutiny, not a demagogue or revolutionary, he (and every one of the ancient Christians) was so much the more an insurgent who lifted himself above everything that seemed so sublime to the government and its opponents, and absolved himself from everything that they remained bound to . . .; precisely because he put from him the upsetting of the established, he was its deadly enemy and real annihilator . . .” — Max Stirner, The Ego and Its Own (London: Rebel Press, 1982), pp. 280-81.

6. And so the centurion’s words become the faithful’s formula of contrition: the priest and the congregation together respond to the invitation to “Behold the Lamb of God” with these words: “Lord, I am not worthy that you should enter under my roof, but only say the word and my soul shall be healed.”

7. Try Dr. Jorg Lanz von Liebenfels, Theozoology, or the Science of the Sodomite Apelings and the Divine Electron [12] (1905) sometime to see how far out this stuff can go. Woo-hah!