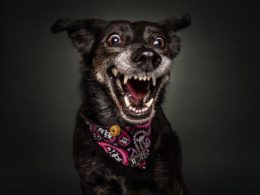 “I think you’re anthropomorphizing,” said the vet. I had brought the cat in for a routine checkup and was describing something cute she had done. I don’t remember what it was (this was some years ago). But it wasn’t the first time he had said this to me, and I had heard the same tiresome charge from others.

The context was usually when I was speaking about what I took to be emotional displays on the cat’s part, as well as displays of affection. And I carried on “anthropomorphizing” after the cat died and I lived for a couple of years with a roommate who had a dog – a dog to whom I became (predictably) very, very attached. I have been owned by two cats in my life and three dogs, if you count the one I “roomed” with. I have shared so much of my life with animals it seems strange now not to have one around (I am hesitant to get another pet, as I want to do some travelling).

Generally speaking, I prefer the company of animals to humans. I find animals much easier to relate to, and I feel much more sympathy for them. When I meet people with children I tend to forget the kids’ names, but if they have a dog I will always remember what he was called. And in long-distance friendships I have a tendency to ask people how their pets are doing, then ask about the kids as an afterthought. I am a sucker for the innumerable cute animal videos people post on Facebook. If push came to shove, I think I could probably send millions of humans to their deaths and sleep like a baby. But I can’t bear to see an animal suffer.

Contrary to what you are probably thinking, I am not all “gooey” about animals (as Princess Anne might say). I believe, for example, that excessive babying and coddling is bad for dogs, and that they need to be well trained. Dogs, like children, are most comfortable with clear boundaries (no matter what they may say). You don’t help a frightened dog, for example, when you hug it and gush over it all in a titter and say, “Oh, poor baby!” This just confirms the dog’s sense that there is something to be afraid of. Much better to reassure with calm and firmness.

Nothing seems more obvious to me than that dogs and cats show “human” emotions. I can’t speak about other animals. I have had very little contact with horses, birds, and other domesticated creatures – although I did spend a lot of time around a friend’s wolf hybrid, of whom I was tremendously fond. (When he died I sent the family a sympathy card.) But there is an inherent problem with putting the matter as I just have – an inherent problem with speaking of animals as having “human emotions.” The problem is the implicit assertion that it is only humans who have emotions.

The real problem with “anthropomorphism” is that it effectively assumes a sharp discontinuity between humans and every other animal. We find the insistence on this discontinuity in the Western philosophical tradition, and in the Judeo-Christian tradition. We are told, for example, that only human beings have “reason,” or that only humans have “souls.” Descartes (a dualist, who believed that the mind is incorporeal and indestructible) insisted that animals were no more than fur-covered automata. Clearly, Descartes never owned a cat or a dog.

Yet most of the people telling me that I’m “anthropomorphizing” are reductive materialists who either have some training in science or imagine that they do. What modern biology teaches us, however, is that there are no sharp discontinuities in the evolutionary scale. In other words, certain organs, behaviors, and patterns of living are found prefigured in organisms that come earlier. Or, to put the matter the other way around, in later organisms we find developments of features present early on in germinal form. Thus, the accusation of “anthropomorphism,” and the assertion of a sharp discontinuity between humans and everything else, is actually incompatible with a naturalistic, evolutionary understanding of ourselves. It is a vestige of the Judeo-Christian tradition (which old Descartes was just rationalizing).

If we understand all living things, including ourselves, as part of a continuum of life, then we realize that there are no sharp breaks. Rather, creatures and their features gradually shade off into others. Given this, it would be surprising if dogs and cats didn’t exhibit “human emotions.” Actually, they just exhibit “emotions,” and no one should be surprised that they have a lot in common with ours. Ours are more complex, perhaps, and in the case of some people more refined. But they are very much the same. Animals display anger, happiness, loneliness, and grief. They also display a rudimentary sense of humor. We see this when they are playful, and when they sometimes play surprising tricks on us.

And, yes, animals feel love. Of all the reductionist pseudo-scientific anti-anthropomorphic crap I have had to endure, the worst is, “Your cat doesn’t cuddle up to you because she loves you. She’s just seeking warmth.” People who say this should be flayed alive. How do they know? You will stun your vet if you respond with such a query. They are used to their authority being accepted without question. But, truly, how do they know? You would only interpret the cat’s behavior as mechanical warmth-seeking if you began by assuming the Cartesian fur-covered-automata bit. But given the much more modern, scientific, and Darwinian “continuum model” I am proposing, it’s much more reasonable to interpret cat cuddling as stemming from an impulse not unlike the one from which comes human cuddling: in other words, real feelings of love.

Of course, not all vets and scientists are this thick. I had a long conversation about this sort of thing once with a biologist who owned several dogs. He summed things up decisively in three words: “They love us.”

The number of cute animal videos on the web is probably now into the millions, and I encounter at least one a day in my Facebook feed. I watch most of them and frequently share them with friends. Why are they so appealing? What is seldom appreciated is that aside from the obvious emotions they produce, these videos fill us with wonder. A huge number of them are billed as showing animals “being human”: such as this one [2] for instance. Whoever posted this video tells us that it shows two huskies arguing “like human siblings.” But in fact it doesn’t show this. What it shows is two siblings arguing like siblings. (I am assuming that the dogs are, in fact, related.) And among the higher vertebrates, siblings quarrel (and display love and affection), whether they are humans or dogs.

Some of us may have had enough of the cute-animal-video phenomenon (Sean Tejaratchi of liartownusa.tumbl.com brilliantly parodies it here [3]). But these videos and our response to them are very important. We feel wonder when animals do such “human” things because we’re automata programmed by wonder-hating, beauty-hating, love-hating flat-souled, bullet-headed, snot-nosed, resentful “expert” geeks who actually don’t know shit. We’re finding out they are wrong; that animals are much more like us than we had thought (and, for that matter, we are a lot like them).

Yes, there are big differences between human beings and animals. But the differences are more of degree than of kind. Do animals have reason? Yes, but a very rudimentary sort of reason. This too is on a continuum (watch a raven solve a puzzle here [4]). Could the difference be that humans have self-awareness and animals don’t? Well, this too is on a continuum. Animals have to have a rudimentary sort of self-awareness, at least where their bodies are concerned, or they could not survive. For example, in order for it to respond when something touches a dog’s tail, it must have the tacit sense that, in effect “that’s my tail.” And if they did not have the tacit sense that “I am doing something wrong,” they could not change tactics multiple times in trying to solve a problem.

They love, they hate, they smile (yes, dogs really do smile), they crave companionship and affection, they feel gratitude, they get depressed, they get bossy, they talk (or try to), and they mourn the loss of one of their own, or of us. They are not robots or toys: they are feeling creatures very much like ourselves. And I strongly suspect that they know more than we think they do (just ask Rupert Sheldrake [5]). So, when your dog greets you today, put down the groceries and greet him (or her: never “it”) in return. When you bump into the cat, say “excuse me” (it’s polite).

Friends, I sing the praises of anthropomorphism!

Except when it’s applied to blacks.