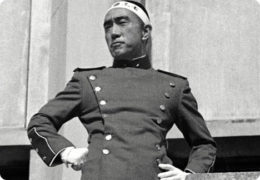 of Mishima’s writings are available, but not all of his books are worth reading. I recommend beginning with The Sound of Waves [22]

, his most naive, charming, and popular novel. Those drawn to his studies of nihilism should read The Sailor Who Fell From Grace with the Sea [23]

and The Temple of the Golden Pavilion [24]

(the latter is partly dramatized in Schrader’s Mishima). The best collection of Mishima’s stage works is My Friend Hitler and Other Plays [25]

. (My Friend Hitler is about the Röhm purge.) Mishima’s most important autobiographical work is Confessions of a Mask [26]

also falls in this category, but should be read after Confessions.) Mishima’s philosophy of life and death is found in his Way of the Samurai [28]

Starting in the late 1950s, Mishima also dabbled in acting and directing. In 1966, he directed and starred in a 30 minute film adaptation of his short story “Patriotism [30],” about the ritual suicide of a military officer after a failed coup. (Also a theme of Mishima’s 1969 novel Runaway Horses.) After Mishima’s death, the film of Patriotism [31] was withdrawn by his widow, but after she died, it was released on DVD by the Criterion Collection.

is available on DVD. He also appears as a human statue in Black Lizard [33]

There is very little good secondary literature on Mishima. I can recommend Henry Scott Stokes’ biography The Life and Death of Yukio Mishima [34]

, Marguerite Yourcenar’s Mishima: A Vision of the Void [35]

, and Roy Starrs’ Deadly Dialectics: Sex, Violence, and Nihilism in the World of Yukio Mishima [36]

Finally, I want to recommend a little-known website by an important Counter-Currents writer: Jack Donovan’s Headless God: A Tribute to Yukio Mishima [38].