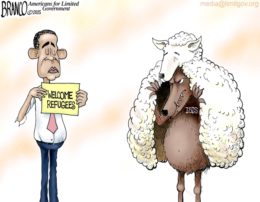 Just saw a story [2] in The Independent: “Refugees in Greece ‘could freeze to death’ in snow due to inadequate winter preparations, warn aid groups.”

My first response was to break open the champagne, but then I thought, “This is how Leftist bullshit works. Create an entirely fake image that is designed to manipulate the emotions of soft, gullible people, and then milk them for everything they’ve got.” So I read on.

The nub of the story (the rest is just repeated hand-wringings):

Some 2,100 places have been found to accommodate those most at risk from the weather in apartments with host families, with another 700 places found for unaccompanied children, but rights groups are calling on the Greek government to act quickly to reduce overcrowding by moving the most vulnerable people on Greece’s islands to the mainland.

The authorities have also been criticised for not preparing properly for the life-threatening winter weather. ‘Europe should stop making the lives of migrants and refugees more miserable,’ a statement from Medicins Sans Frontieres read.

Those poor, frozen little refugees – their tiny, emaciated brown bodies frozen hard and blue because of a cruel and callous Europe. And look at all that terrible snow! Don’t forget to conjure up the snow before your mind’s eye. It’s there in the headline, after all!

Oh, the humanity! How can we let this happen?

Wait, let’s take a step back. What is this story actually based on? Answer: one Afghan who “died in the cold conditions last week.”

What does that even mean? The Independent doesn’t provide a link to that story. He could have been 94 and hit by a falling piece of masonry while admiring the frost on the grass.

Police in northern Greece say an Afghan migrant has died of hypothermia after crossing a river that forms the country’s border with Turkey.

The body of the man believed to be 20 years old was found in a field early Tuesday near the Greek border town of Didimoteicho after police were alerted by another Afghan man who said he had traveled with him across the Evros River.

Overnight temperatures in the area plunged to –14 Celsius (7 F).

I’m sure you will agree that this scenario is quite different from the image we were invited to conjure up by the bare mention of the man’s death in the first article.

This story is not about refugees in Greece, but instead a single refugee illegally entering Greece in a dangerous manner, without using common sense, and getting killed in the process. This is more an entry for the Darwin Awards than a tragic example of European cruelty.

The “towelhead” in question died because of sheer stupidity and because we have signalled a green light to these people that they can live on our welfare and molest and rape our women and children with relative impunity.

He also died because he forgot his towel.

Okay, that’s a low blow, but, f**k it, that is an entirely legitimate response to the ongoing emotional manipulation of these “dead refugee” stories, where for every one that dies we are expected to take thousands more in to irrevocably ruin and destroy our societies.

My prediction is that no refugees will die of the cold this winter in Greece or anywhere else, unless they are actually engaged in otherwise dangerous and illegal acts.

The truth is that they are horrendously pampered, their every whim and need seen to by NGOs and Leftist volunteers tripping over themselves to morally signal how wonderful they are. Meanwhile, our indigenous homeless are the ones freezing to death on the streets [4].

One thing stood out in the Independent story: “2,100 places have been found to accommodate those most at risk from the weather in apartments with host families.”

Hope none of those families have daughters, as this story [5] is the sort of thing that is more likely to happen than a refugee freezing to death:

A seven year old girl was stabbed to death in an apartment in Upplands-Bro in northern Stockholm on 25 July this year by a 36 year old man, Daniel Gebru. Ten months earlier Gebru arrived as a welfare of migrant from Eritrea to Sweden . . .

Gebru has not been able to give any concrete reasons for why he cut the throat of the seven-year girl in the bathroom of her home. He had previously been living in the apartment. What he did there on that day is unclear because according to some data he was not living there anymore. As the Court notes, however, he did live in the apartment when the murder was committed but Gebru had failed to pay rent.

Gebru has stated that he had intended to take his own life but for unknown reasons instead stabbed the girl to death.