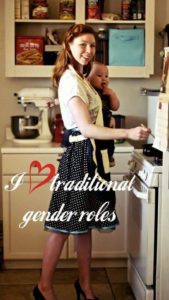 It’s no secret that historically, men have harnessed intelligence, drive, pride, and anger to lead and conquer, while women have been empathetic supporting characters who provide vital biological services. For the most part, it’s a model that works, and Alt Right arguments for traditional female roles are legitimate: there’s tremendous value in having women devoted to raising many healthy, happy, stable children amidst a well-tended home. But there may also be room for woke women in the Alt Right, despite widespread opposition to an open-armed welcome. The movement can consider, with some reservation, incorporating women without being feminized or co-opted.

The truth is that men are better suited to the cause. After all, what makes women caring also makes them crazy; the stability they instinctually seek can also be irrational. These emotionally-driven characteristics that enable the creation and rearing of beautiful white babies are often at odds with the tenets of the Alt Right: confident intellectualism and literacy, reliance on statistics, righteous hatred, unassailable positions regarding immigration and Jewish power, clandestine friendships, late-night trolling, love of offensive memes, and reverence for a certain frog.

Further, Alt Right men have unlocked the power of disregarding what normies think of them. They’re also growing bolder in declaring themselves White Nationalists versus the Alt Lite safe space of civic nationalism, and have an increasing supply of comrades in case they alienate friends and family with their salty truths. What’s more, their belief in the cause is so strong that such losses might even be a relief. Being declared a racist or a Nazi is the new compliment. And while the ladies in their lives can hear their arguments, clear and potent as moonshine, women are justly afraid of what taking the red pill might mean for themselves.

Feminists can spew their drivel about fair pay, consequence-free sex, or growing out all their body hair while demanding government-subsidized birth control and abortions. But the true core of the female ethos is a need for stability. And, if truly and properly embraced, the Alt Right is a dangerous and unstable proposition.

The only constants in the Alt Right are Pepe’s knowing smile and a rejection of the existing order; otherwise, the path forward is uncertain. It requires commitment to viewing the environment through a crystal-clear truth lens, even though the world is filthy. It’s the terrifying realization that your people are being deftly dispossessed, and knowing that it’s impossible to return to blissful ignorance of the reality of diversity. It’s the embarrassment of having been pulled along on puppet strings by Jews who’d eradicate you as easily as employ you. And for women, this path forward is far more worrisome than for men, for whom racist loathing and suspicion can, remarkably, be passed off as endearing, idiosyncratic personality quirks.

White women, particularly mothers, are pressured by progressives in the same way blacks and mestizos are to vote Democrat – fall in line, or be maligned. Many women who openly identify with traditional gender roles or demonstrate a desire to be surrounded by their own ethnicity will get blackballed; ironically, those who are usually crying racist are living well in their own white enclaves. It’s typical liberal logic: they claim the moral high ground and the title of most tolerant . . . until you disagree with them.

A man’s risks in going public as a member of the Alt Right are mostly financial. It’s horrific to lose your job over your (totally correct) assessment that race, specifically the white race, matters. If a man’s naxalt-rhetoric buddy from the soccer league or his batty aunt turn their backs on him . . . no great loss. But a woman’s risks in going Alt Right are largely social, and without the availability of Standard Pool Parties to fall back on, a woman has no social safety net.

A woman can lose everything by going public with her desire to avoid people and color and the fact of her preferring the company of whites, because her relationships with other people are a large part of her identity. If she is openly referred to as a racist, a traitor, or a doormat, it will hit her emotional well-being harder than it would a man. Her reaction may be weak compared to a guy’s, and the Alt Right doesn’t deal in propping others up when they demonstrate weakness or ineptitude. But as women thrive on a sense of community, it’s valid to acknowledge that the threat of having their social standing stripped from them in favor of a crusade that is still in its infancy is undoubtedly petrifying.

There aren’t enough women who publicly align with the Alt Right at present in order for the newly awoken to find that new community. A man can thrive as a lone wolf, but a woman will wither from loneliness. So while many in the Alt Right want to keep it a goy’s club, the women around them will suffer if they’re not given some meaningful way to interact with or participate in the movement. Supporting them as they learn the lingo and how to properly troll could mean all the difference as they lament the likely loss of numerous long-standing relationships. It may sound trite, but for a movement as important as White Nationalism, there is strength in numbers, as whites are a rare breed as it is. Turning away women because of their emotionality is reckless and shortsighted.

Consider the sad scenario of a man being part of the Alt Right and not indoctrinating his woman before they commit themselves to each other. Women are vastly more important biologically than men, and with today’s white, liberal/independent/apolitical woman, he’ll be lucky to get a single child out of the relationship. She’ll continue to signal the virtues of being a career woman, and instead of performing the most important function the Alt Right espouses by having many white children, he’ll maybe end up with a single weird kid, two unhappy parents, and three ambivalent cats. Instead, a wife who’s a White Nationalist is far more likely to push for procreation. That’s win-win, folks.

In the Fourteen Words context, it’s also illogical to keep women at arm’s length: as the most fervent supporters of their kids’ well-being, it makes sense to bring women into the Alt Right. The people who would literally die for their children should be the ones entrusted with protecting their interests in education, relationships, and lifestyle from birth. Keeping your women in the dark regarding the realities of race might unintentionally fuel the multicultural fire that’s being stoked in today’s school system. Without someone there to keep tabs on the “lessons” your kid’s getting at school (if she can’t homeschool), he’ll be fully down with the brown and indoctrinated in their ways in no time.

If your kids and the future existence of the white race is the most important and costly investment you’ll ever make, is it cheaper to raise them (alt) right with both parental influences, or to fight the system for eighteen or more years with half your household disarmed and clueless, hoping to red-pill your kids at some point in the future? For anyone who’s ever been stuck in a depressing conversation with a twenty-year-old Bernie supporter, it should be easy to acknowledge that it would have been preferable to teach them race realism and the importance of national identity years ago.

The Boomers made many critical mistakes, and not least among them was to let their kids choose their own paths: seeking a useless liberal education, leaving them ignorant of the reality of race, and tossing aside their racial identity in favor of systemic compliance. In the meantime, the Jews laughed and promoted their own children into the financial sector and other influential fields, thus solidifying their control even further.

So while Hillary Clinton’s shockingly tone-deaf Alt Right speech brought a lot of cucks and Jews to the movement’s door, it’s actually the women who might just boost the movement to the next level. While the Alt Right has thrived in part thanks precisely to its exclusionary nature, it’s only reasonable to assume that a movement has to expand and evolve in order to gain greater influence. By embracing the opportunity that an exceptional woman can provide, a man can do more to propel his genetics and the white race than he could alone via the Internet and Pool Parties. It’s not a strategy available or sensible for all men, but it should be a consideration for those who wish to become involved in, and promote their current and future family members’ involvement with, the movement.