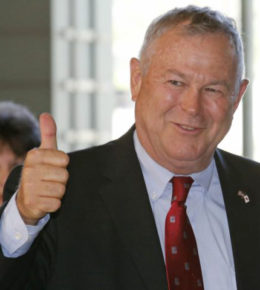 A swell of articles [2] has been released recently informing us that Trump’s list of possible Secretary of State picks keeps growing and changing. Some top names the list has now or previously included: John Bolton [3], Bush’s Ambassador to the UN and prominent neocon, described by Reason Magazine as “addicted to regime change” (something the Alt Right has lost any passion for, even if not for the same often idealistic reasons that libertarians have); Rex Wayne Tillerson [4], CEO of Exxon Mobile and climate change skeptic; Joseph Manchin III [5], a Senate Democrat known for his bipartisanship in working with Republicans on social issues like abortion and gun rights; retired U.S. Army General David Petraeus [6], who in the time since resigning from the CIA over an extramarital affair has created a group, Veterans Coalition for Common Sense, urging increased gun control; Rudy Giuliani [7], who was rated by Haaretz as the best candidate for Israel, has defended New York City’s status as a sanctuary city [8] and has flipped back and forth on issues like publicly funded abortion [9] . . . and Dana Rohrabacher, who will be the subject of this article.

In an informal poll held over at Breitbart [10], readers ranked their preferences for Trump’s Secretary of State pick as Giuliani, Bolton, Petraeus, Romney, and then Rohrabacher in that order. I strongly suspect that Rohrabacher’s last-place status has a lot to do with his relative lack of name recognition, and I’m wondering if we can’t pull our resources together and try to rectify that situation. At a bare minimum, he deserves to place higher than Romney. I’m fairly certain most of us will agree that he deserves to rank higher than Bolton.

All of these choices have at least a few virtues, of course: Giuliani is about as red-pilled on race and violent crime [11] as you’ll find in any mainstream public figure; and even if we oppose Bolton’s foreign policy, he is at least adamant about refusing to cede U.S. sovereignty [12] to global authorities who don’t have U.S. interests at heart at all. Given what we have in this pool of candidates to work with, arguments like these may seem like the best we can hope for.

But in terms of the Alt Right’s priorities, I think Dana Rohrabacher comes much closer to the ideal than any of them.

First of all, his background is in libertarianism, but his politics drifted farther to the right as time went on. Samuel Konkin, author of the New Libertarian Manifesto, provides some background:

The final step toward my libertarianism was provided by an anti-communist free-market anarchist named Dana Rohrabacher at the St. Louis YAF Convention. He was a charismatic campus activist, radicalized by Robert LeFevre who provided him with small funding to travel the country with his instrument and folk songs from campus to campus, converting YAF chapters into Libertarian Alliances and SIL chapters. Alas, later he fell into politics, but not the LP. The Libertarian billionaire Charles Koch supported him in two failed Republicans primary campaigns, and after Rohrabacher put in time as Ronald Reagan’s speechwriter, he got his reward of a safe seat in the U.S. House of Representatives from Orange County. He is still in office today, with growing seniority. There are few issues on which he is still Libertarian. But in 1969–71, Dana Rohrabacher was the most successful and most beloved Libertarian activist.

This part is interesting simply because the Alt Right is full of libertarians who drifted further to the Right. While it may be unlikely Rohrabacher even secretly follows any Alt Right sources, he has at the very least been subject to the same pressures that created it. Rohrabacher’s stances on the boilerplate libertarian social issues are mixed: while he supports federal legalization of marijuana [13], he also has a 13% rating from the ACLU, a 17% rating from the NAACP, and a 0% rating from the Human Rights Campaign [14]. And in any case, he doesn’t seem to smoke as much marijuana as Gary Johnson does. It’s hard to imagine Johnson speaking like this [15] about sending U.S. foreign aid to Pakistan. In contrast to the strange and awkward pettiness [16] Johnson displays under criticism, Rohrabacher at least comes off like a man who would know how to take his own side in a fight. Speaking of which, before ever even taking office, Rohrabacher’s opposition towards communism during the Cold War was so intense that he actually reportedly “hiked from Pakistan into Afghanistan with a group of mujahedin fighters who were battling Soviet forces [18]”—fighters who “actually engaged Soviet troops in combat near the city of Jalalabad during the two months Rohrabacher was with them.” It bears note that he seems to be under no delusions about what kind of an alliances Islam has to offer, suggesting that he sees Islam as a threat to Western civilization [19] on the whole.

Quick searches on Google will reveal that Rohrabacher has long been sending Leftists into the same kinds of apoplexy that endeared many in the alternative right to Trump: Wonkette [20] reports on his rationale behind alliance with the Taliban:

The potential rise to power of the Taliban does not alarm Rohrabacher, because the Taliban could provide stability in an area where chaos was creating a real threat to the U.S. Rohrabacher says that under the previous situation Afghanistan was becoming a major source of drugs and a haven for terrorists “an anarchistic state of narco-terrorism.” In contrast, the Taliban leaders have already shown that they intend to establish a disciplined, moral society.

Rohrabacher calls the sensational media reporting of the “harsh” imposition of strict Islamic behavior, with the underlying implication that this somehow threatens the West, “nonsense.” He says the Taliban are devout traditionalists, not terrorists or revolutionaries, and, in contrast to the Iranians, they do not seem intent on exporting their beliefs.

Wonkette’s takeaway is expressed by the headline, “Dana Rohrabacher (R-The Taliban) For Secretary of State? LOL They Are Just F*cking With Us Now.” But others will appreciate that Rohrabacher seems to take a realistic rather than idealistic approach towards foreign policy and consistently places American interests first.

Fair.org [21]’s article attempting to link Steve Bannon to the Alternative Right notes the “guarded” anti-Semitism of Breitbart, which at least “rhetorically” includes Jews “in the in-group championed against the non-white” when it references “Judeo-Christian values.” However, they contrast this “guarded” anti-Semitism with the anti-Semitism of Dana Rohrabacher. When Rohrabacher submitted his Stop the Christian Genocide Act which would have prioritized immigration from Christians (and Yazidis) in the Middle East over Muslims, they tell us, he “pointedly” left the “Judeo” out of “Judeo-Christian” when making statements like, “we have a president of the United States who is unable to protect Christians.” (Funny enough, though, while I’ve heard of Judeo-Christian values, I’ve never heard of a Judeo-Christian.)

Tumblr’s Crazy/Stupid Republican of the Day [22] condemns him for “speak[ing] glowingly of Vladimir Putin going back to when they hung out in a pub in Russia and were arm-wrestling back in the 1990s [23]” as well as for showing up on CNN “while believed to be gleefully drunk” during the government shutdown of 2013.

Space.com [24] describes Rohrabacher, who served on the Subcommittee on Space and Aeronautics from 1997 to 2005, as “a strident advocate for supremacy in space.” While the poet Gil Scott-Heron [25] famously made the argument that it was racist for American society to place so much focus on the space race and try to put “whitey on the moon” when he can’t pay his bills (and, to top it all off, rats are biting his sister), libertarians of the more right-leaning bent tend to see space as both a new frontier for the pioneering spirit, and an opportunity for civilization to strive to new heights — to the point that libertarians in space has become a full-blown literary trope [26].

Even with his background in libertarianism, Rohrabacher seems to have very consistently been of the nationalist strain of libertarianism — in the vein of figures like Hans-Hermann Hoppe [27], the anarchist who nonetheless wrote an entire book [28] devoted to making the argument that monarchy is preferable to democracy. He opposes aid to Ethiopia [29], and even talks about the “Ethiopian Government’s Confiscation of American Citizen’s Property.” He supported California’s Proposition 187 [30], which would have prohibited illegal immigrants from acquiring government services; sponsored an amendment in 2004 that would have required hospitals to provide information about aliens’ citizenship and immigration status before being receiving federal reimbursement for any medical costs; and has a 100% rating from both FAIR and USBC, as well as an A+ from ALIPAC [31], which makes his record of both limiting immigration in general and actually taking hard steps to combat illegal immigration literally spotless.

While others have criticized Trump’s break from past tradition in calling the President of Taiwan, Rohrabacher has come out with a strong statement [32] in support of the fact that this “show[s] the dictators in Beijing that he’s not a pushover.”

Secretary of State [33] is one of the highest appointed positions in the entire U.S. government, responsible for carrying out the very sets of policies the Alternative Right stood most in support Trump for his stances on: U.S. immigration policy abroad; foreign policy; diplomacy; and, in general, whether or not we truly get “America First [34]” policies for the next eight years. I’m not sure yet if Dana Rohrabacher is our guy, but he definitely deserves our attention.