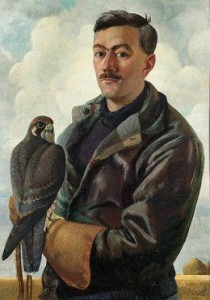 Two rather incongruous points of Williamson’s life stand out. One is that he achieved fame with what is usually regarded as a children’s book, Tarka the Otter (originally published 1927, with a movie version in 1979).

The other is that he was a friend of Lawrence of Arabia; and that it was on his way back from posting a letter to Williamson that T. E. Lawrence was mysteriously killed in a motorcycle accident. This was 1935. The matter under discussion in the correspondence was a request by Williamson that Lawrence join Sir Oswald Mosley in a campaign for European peace. Reportedly, Lawrence agreed.

Williamson was a prolific, compulsive writer (over 50 books, including posthumous volumes). Sometimes he is described as an author whose fame was consigned to “the memory hole” on account of his fascist associations and enthusiasm for National Socialism.

But this is very misleading. Even as an old man in the 1960s, Williamson was called upon by one of his old papers, the Evening Standard, to revisit and recount the 1914-18 battlefields of the Western Front [2], and ten years later he was engaged to draft a scenario for a long-delayed film version of Tarka. When he died in 1977 he merited a 1700-word obit in The Times [3] that described his great output and scarcely mentioned his “Fascist sympathies.”

Blackshirt sympathies are really a side-note with Williamson, as they are with Yeats, Belloc, and Wyndham Lewis. If he is largely forgotten today, this is not because he went to Nuremberg rallies (nobody forgets the Mitfords, after all), but rather because of the peculiar nature of his output. Apart from his war memoirs, most of his writing consists of highly detailed close observation, with little direct commentary on the world at large. (The newspaper column at the end of this article is a good example of Williamson’s work. Taken in large doses, such detail tends to become tedious.)

A good contrast with Williamson is the case of George Orwell, whose pose as “a man of the Left” was purely for literary viability in the 1930s. From his social attitudes and military bearing, to his patriotic pronouncements (England, Your England) and anti-Stalinism—even his funny mustache—Orwell was a most unlikely “man of the Left.” Yet that is how he styled himself. Orwell even shared with Williamson a fondness for nature-writing, though their differences in approach are striking, as I will come back to.

First, though, I want to say a few words about Williamson’s ruralist books and journalism. He wrote in a time when nature-writing was a popular genre, and a mainstay of daily newspapers, particularly in England, much as wine columns seem to be today. I guess these “countryman” columns in London papers functioned as “breathers,” giving tram and Underground riders a break from the usual Fleet Street headlines and Oxo adverts. And maybe editors and press-lords believed that throwing in a bit of farming, foxes and foliage would raise the overall tone of their newspapers.

The most famous example of these “countryman” columns is the one Evelyn Waugh made up for his satirical novel, Scoop (1938). In Scoop, a newspaper tycoon wants to hire a fashionable young novelist named Boot to cover a civil war in Africa. By mistake he gets the wrong Boot. Not society star John Courtney Boot, but his impoverished hick cousin, William.

Shy, befuddled William Boot lives in deepest Devon where he writes a column called “Lush Places,” for the vulgar London newspaper The Daily Beast. (The title has since been repurposed for an even more vulgar webzine).

We get only one snippet of this impenetrably rhapsodic column, “Lush Places,” but that leaves us gasping for no more: “Feather-footed through the plashy fen passes the questing vole.”

Henry Williamson, you might say, was the real “Boot of The Beast” in Scoop. He was unworldly. He wrote “countryman” columns. He described, close-up, the behavior of the salmon and the otter, the “feather-footed vole” in the “plashy fen.” He lived out in Devon, and then later in north Norfolk, where he worked as a country writer and farmer.

What a contrast with Orwell, who was not only a sort of war correspondent in the Spanish Civil War (for the Tribune, and in his memoir Homage to Catalonia) but made a special point of joining an eccentric faction, the POUM, that opposed Stalin but supported the Spanish Loyalists.

But Orwell’s mindset was not that far off from Williamson’s. They were near-contemporaries (Williamson: 1895-1977, Orwell: 1903-1950), and Orwell too often wrote about nature and farming.

One of Orwell’s best known essays, “Some Thoughts on the Common Toad,” is a mystical-whimsical contemplation on toad-spawning as an annual rite of spring:

Frequently one comes upon shapeless masses of ten or twenty toads rolling over and over in the water, one clinging to another without distinction of sex. By degrees, however, they sort themselves out into couples, with the male duly sitting on the female’s back. You can now distinguish males from females, because the male is smaller, darker and sits on top, with his arms tightly clasped round the female’s neck. After a day or two the spawn is laid in long strings which wind themselves in and out of the reeds and soon become invisible. A few more weeks, and the water is alive with masses of tiny tadpoles which rapidly grow larger, sprout hind-legs, then forelegs, then shed their tails: and finally, about the middle of the summer, the new generation of toads, smaller than one’s thumb-nail but perfect in every particular, crawl out of the water to begin the game anew.

I mention the spawning of the toads because it is one of the phenomena of spring which most deeply appeal to me, and because the toad, unlike the skylark and the primrose, has never had much of a boost from poets. [2]

Orwell constantly fantasized about living in the countryside, and even talked of becoming a farmer someday. Around 1936 he got as far as living in North Hertfordshire country store beside an estate called Manor Farm—a name he borrowed some years later when he penned a fantasy about a farm where all the animals, led by smart pigs, take control and rename the place Animal Farm.

The romance of the country permeates his other fiction. In one novel after another, Orwell’s human characters rouse themselves, suddenly and unaccountably, to go tramping through meadows and hedgerows. In A Clergyman’s Daughter the title character gets amnesia and finds herself hop-picking in Kent. The superficially different stories in Nineteen Eighty-Four and Keep the Aspidistra Flying both have romantic episodes in which a couple go for long hikes through idyllic woods and fields, where they marvel and fornicate amongst the wonders of Mother Nature. The middle-aged narrator of Coming for Air spends much of the novel dreaming of fishing in the country ponds of his youth, but when he finally takes his rod and seeks down his old haunts, he finds that exurbia has encroached and his fishing-place is now being used as a latrine and rubbish-tip by a local encampment of beatnik nature-lovers.

For Orwell, fauna and flora are never just interesting specimens by themselves. They are always somehow political and anthropomorphized, tied up with human associations. Toads having sex are like tiny people performing The Rite of Spring. The wild is a place where you can escape to make love safely, far away from the eyes and ears of your landlady or The Party (although Winston Smith does worry that there may be microphones hidden in the trees!). Despoiling your fishing hole is a Bad Thing not because of pollution or dead fish but because it insults your inner picture of the world.

In his abbreviated career, Orwell remained very much the urbanized literary man, never the countryman. He saw natural phenomena as things that had to be justified and rationalized in a utilitarian way, so they could fit into his world view. Or at least have some literary usefulness.

For Williamson, literary usefulness was pretty much beside the point. He received commissions and royalties from his columns and books, but basically he earned his living from the soil. For him, toads were toads and pigs were pigs. This was reality, and the important thing about his little piggies was that they were starving and needed to be fed, or else they would die.

Here, then, is a Henry Williamson column from the Evening Standard, early 1940. He is describing a scene on his north Norfolk farm. The column is followed by its then-worldly (but now extremely obscure) adjoining headline. Williamson’s agony over his hungry piglets describes a situation that could very well have occurred a millennium before.

Come with me into the open air this afternoon, and help me saw up logs for the hearths in the farmhouse below. It’s frosty, the pipes in the cow-house are frozen.

Take this Norwegian saw, with its razor-thin serrated band, which will cut through a two-inch green bough in four strokes – or would, before someone used it for four-hundred-year-old oak posts.

It’s pretty hard work, you say, using it now? Well, carry on, it will get you warm, anyway!

Half an hour later, we are warm and glowing, although when we touch the blade of either saw with a finger, it sticks to the steel. That will tell how keen the frost is.

It’s as cold as it was in the High Pyrenees, years ago with old Kit, when we climbed up all day stripped to the waist, and skied down at night, when the stars were flashing and the frosty snow-flakes glinted in the flashes of Sirius.

Down there, before a typewriter, one shivers, although a rug is round the knees; out here, it’s grand, and the pile of logs grows higher. Forgotten for the moment are the problems of farming: the delay in delivery of the deep-digger plough; the pigs below which are being fed on sugar-beet tops and crushed oats, because there is no proper food available.

Twenty-four little pigs – and for weeks I have not been able to buy any proper food for them. I can’t send them to market, either, for the market is closed to ‘stores’, owing to swine fever in the district.

The food-merchants tell me they get supplies only with the greatest difficulty, and then in small quantities.

Meanwhile my little pigs are half-starved, and I only hope that the R.S.P.C.A. won’t prosecute me for cruelty.

However, let’s forget it for a while and saw some more wood. And when the arm is tired we’ll enjoy the view. Isn’t everything quiet? The gold of the sunshine seems frozen, immingled with the frosty air; hardly a sound.

Even the sea is silent on the distant sands, where the geese wait until twilight to come in and feed on the clover in the fields. Let’s hope they leave some for hay next summer. Shoot them? You’ll be lucky to get within two hundred yards of them. They have sentinels out, watching with raised heads.

Twilight comes suddenly, with purple-red afterglow of the sun hiding coldly behind the frosty fog creeping up the valley with still layers of cottage chimney smoke. The nip comes back to ear and finger-tips. The old car slithers over the rimed grass, drawing the trailer. And suddenly five airplanes roar overhead, low, from their vigil across the North Sea. One lags behind, the engines spluttering. It lurches through the air, so low that we can see one of the crew be- hind the crystal dome.

Are they very cold in there? They fly on, and we go down to the farm to look at the little pigs. This is the age of endurance – for a better future, we hope.

2. Originally published in Tribune and The New Republic, 1946. Collected in In Front of Your Nose: The Collected Essays, Journalism and Letters of George Orwell, Vol. 4. New York, San Diego, London: Harcourt Brace Jovanovich,  1968.