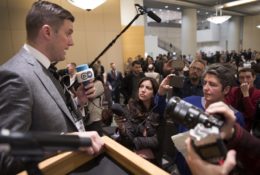 It is ironic — or maybe just sadly fitting — that Richard Spencer, the man who launched the Alternative Right brand, may have just destroyed it. But that seems to be fallout of his speech at the recent National Policy Institute conference, which he ended with the words “Hail Trump! Hail our people! Hail Victory!” Spencer then raised his empty liquor glass in a toast. Some people in the audience, however, predictably responded to “Hail Victory!” (Sieg Heil) by giving Nazi salutes.

This was, also predictably, caught on video by The Atlantic, which had been invited into the conference to make a documentary about Spencer and the Alternative Right. When the video was made public, it was of course rapidly propagated. For years, the Left has been pushing the increasingly tired slur that Jared Taylor, Peter Brimelow, Kevin MacDonald, etc. are just “suit and tie Nazis.” But Spencer breathed life into this charge by furnishing visual “proof.” There was surely rejoicing in the offices of the ADL and SPLC, as well as the Washington Post and New York Times. Now I do not wish to split hairs about the motives and culpability for this public relations disaster, except to say that I do not believe the charge that Spencer was intentionally sabotaging NPI and the Alt Right. Instead, I wish to comment on the consequences of this affair and how we should respond to it.

First and foremost, Donald Trump, when confronted with the video, naturally condemned and disavowed the Alt Right. He’s not a Nazi, after all, and he probably found it as embarrassing as I did. This is a pity, because Trump has to know that almost no mainstream intellectuals and commentators defended his candidacy and vision. But people on the Alt Right did.

Moreover, we have an enormous pool of talent and brainpower. Our public writers and activists are only the tip of the iceberg. The vast bulk of our people are secret agents, with clean public records. My hope was that during the first Trump administration, the Alt Right could start mobilizing this talent to craft policy proposals to help show that Trump’s ideas about immigration, trade, and foreign policy are morally defensible, politically desirable, and practically feasible. In fact, I rather hoped that the National Policy Institute would take a hand in crafting some of these national policies.

It was always a long shot, of course. Over the past two years, there has been a massive influx of talented people into our movement, but our organizing and fundraising have lagged far behind. We honestly don’t know what to do with all these people. We have a lot of work ahead of us if we are going to actually influence policy, and the way forward is not always clear. But when you are at a loss about what to do next, at least do no harm [4]. Spencer really had one job: not to embarrass us or Trump, and he blew it. Now there is zero chance of any proposal coming from NPI being taken seriously.

But there is no reason why the rest of us have to share Spencer’s fate, which is why various Alt Right and Alt Light figures have distanced themselves from him. Mike Cernovich [5] and Paul Joseph Watson [6] have been most vociferous and strident, accusing Spencer of intentionally sabotaging the Alt Right. Stefan Molyneux [7] recommended Cernovich’s take. Vox Day [8] does not think Spencer is controlled opposition but that he nevertheless behaved in a self-aggrandizing manner and made a serious public relations error. Ramzpaul [9] declared the Alt Right brand irreparably damaged, so he is now simply going to refer to himself as a man of the Right.

Those who actually spoke at NPI made more measured comments. In an interview, Jared Taylor [10] declared, “I was very surprised. I was very saddened by it. I think it’s a terrible, terrible pity. I don’t endorse any form of National Socialism. I think that’s a completely inappropriate and crazy model for the United States.” Peter Brimelow [11] at VDare and F. Roger Devlin [12] at The Occidental Observer [12] both rejected the Nazi brand, attributing Spencer’s words and the salutes from the crowd to “juvenile bravado” and “rowdy behavior on the part of a few overzealous and partially drunken young men.” In an interview, Matt Tait [13] basically endorsed the analysis offered by Colin Liddell [14] and described Spencer’s final gestures as “snatching defeat from the jaws of victory” and “undoing what is good about the Alt Right.”

Spencer’s defenders have been pushing the line that we should not air our differences in public (of course). But there are problems with this. First, if Spencer speaks and we remain silent, people will assume that he is speaking for us. Second, criticizing Spencer is not about changing his behavior. It is about social signaling: communicating our differences to the public we are trying to persuade. So obviously it cannot be confined solely to back channel whispers. Finally, it presupposes a false unity to the movement. Literally the only thing that unifies us is common goals (and with Spencer I am not even sure about that). But if our movement is inherently pluralistic, colonizing every niche in the cultural and political ecosystem, then the only way to establish and maintain our different approaches is to criticize one another. Of course it can go too far. And there are some people who spend all their time attacking movement people rather than our enemies. But with healthy pluralism comes healthy dissent and debate.

Richard Spencer does not speak for me either. Spencer has damaged the Alt Right brand — perhaps irreparably — by associating it with Nazism. The Alternative Right began as a particular brand, the name of Spencer’s webzine. But it quickly became a generic umbrella term encompassing a range of different alternatives to mainstream Republicans and conservatives.

But from its start, the Alternative Right webzine was an entryist tool for White Nationalists. It was a platform for outreach and conversion of people who are closer to the mainstream. It created a safe space where “normie” conservatives could encounter human biodiversity, ethnic nationalism, the Jewish question, paleomasculinity, etc. without having to adopt stigmatizing labels like “Nazism.” But after Spencer’s NPI speech, there is good reason to think that will no longer work.

What’s wrong with branding the Alt Right as Nazi? Here are a few thoughts.

Please don’t give me the tired argument that they’ll call us Nazis anyway, so we might as well become them. First, some of us really aren’t Nazis. Second, even if you are, we’re only fighting against the whole damn world, so why take on additional and needless burdens? Third, just because your enemies are out to get you doesn’t mean that you should make their work easier. (Compare the press coverage of the recent NPI conference to the coverage of the NPI press conference [15] back in September, then explain to me how the saluting made no difference at all.) Finally, they’ll call you Jews, informants, and fags too. Do you want to own those labels as well?

Please don’t tell me that all publicity is good publicity. There really is such thing as bad publicity.

Please don’t tell me that Spencer’s critics are all simply trying to make friends with an implacably hostile press. First, our concern is obviously not persuading our enemies but reaching people who are sympathetic or neutral. Second, if the press is implacably hostile, why is Spencer so focused on courting it? The great irony here is that I have published quite a bit about Hitler and National Socialism at Counter-Currents, whereas literally the only thing Nazi-like about Richard Spencer is his haircut. This is why everyone found this gaffe so surprising — some pleasantly, others unpleasantly. When I first met Spencer in 2008, he was dating an Asian woman (something now public because of an article in Mother Jones). The only foreign regime he strongly identifies with is Putin’s Russia, which is valiantly battling against “Nazis” in Ukraine. As long as I have known him, Spencer has been chummy with Jews like Paul Gottfried. NPI, like American Renaissance, has always played patty-cake with certain Right-wing Jews. Before Spencer came on board, NPI had published Edward Rubenstein, Byron Roth, and Michael Hart. But, unlike American Renaissance, they published Kevin MacDonald as well. Spencer has continued in that vein, publishing additional books by Roth and Hart, plus Richard Lynn’s The Chosen People, and various essays and introductions by Paul Gottfried. Before long, Spencer will be back to business as usual, which means that most of his new-found friends will simply go silent — or be back at this throat.

Literally everything about this controversy, from Spencer’s “Nazism” to the press coverage to the adulation of the Nazi troll army is at best superficial and at worst fake. But that’s the stuff of which politics and publicity are made. The negative consequences, however, are real.

Now some Alt Rightists are rejoicing that Spencer’s gesture has caused Alt Light poseurs and “cucks” to abandon the Alt Right brand. But that is self-defeating. Outreach efforts only work by attracting people who don’t already agree with us. These people are only a danger if we fail to convert and assimilate them. But apparently some people don’t want to be bothered with converts.

I do want to end on a hopeful note. There is no question that the Alt Right is a useful brand, and because of that, it may well revive. But even if the Alt Right is dead, White Nationalism is still very much alive and growing. What happened at NPI was foolish and self-defeating. And there is always a danger that too much self-defeating behavior will add up to a simple defeat. But our progress has always been two steps forward, one step back. So let’s just learn from this setback and keep pressing forward.