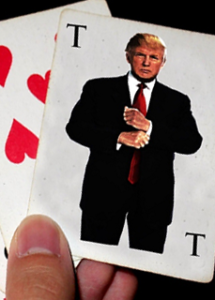 One important thing I learned during the O. J. Simpson trial is that race trumps everything. I call this the Race Rule. I have found that it governs almost all human behavior, and once I discovered this, it became harder and harder for me to find evidence that refutes it. I know, I know . . . confirmation bias. A hammer in your hand makes mealy-mouthed, cuckolded, beta-male liberals look like one of those big-headed roofing nails that’s three-quarters of the way in and needs just one more well-aimed whack, and . . .

Well, you see my point. Still, it really is hard to find instances in which human beings don’t include race in their major decisions when dealing with people of other races.

Anyway, remember how the O. J. trial prosecutors thought it would be a good idea to stuff the jury with women, hoping that gender could make disinterested observers forget about race? Remember how they felt that a mostly female jury would identify with O. J.’s murdered wife before identifying with O. J. himself? Remember how well that worked out? That’s because gender does not cut as deep as race, and the prosecutors realized this too late. The defense, of course, knew it all along. Everyone knows that black women are victimized most by black men. No other subset of the population even comes close in the victimizing-black-women department. Yet, the O. J. trial proves that, when forced to choose, most black women will still side with their black male victimizers rather than with white men (who victimize them little) or white women (who victimize them not at all).

Yes, this does not make sense . . . until you internalize the Race Rule. Then everything makes sense. Again, Race Trumps Everything.

It seems, however, that the Democrats have forgotten this dictum in the days leading up to the 2016 election. They are now playing the gender card in the same way that the O. J. prosecutors played the gender card. If you don’t vote for Hillary, then you must be a sexist, President Barack Obama tells us. Furthermore, if you are a woman, then there is absolutely no reason at all to vote for Donald Trump. He’s a man, you see. He uses the word “pussy.” He cannot possibly care one whit about the interests of women. As if the interests of women were mutually exclusive with the interests of men, that is.

To be fair, the Democrats would play the race card if they could. It is a better card. But since Hillary is as white as Harriet Beecher Stowe, the gender card, at this point, is all they have. Since they want to win as badly as we do, I don’t blame them for playing it. But they don’t quite realize one thing: The Republicans are going to win because the Republicans are finally playing their race card.

And with all things being equal, race will always trump gender.

Sure, Donald Trump is not being brazen about it. He’s not waving the race card in his opponent’s faces the way the Democrats do (imagine, Donald Trump actually being subtle about something!). But make no mistake, in his rhetoric and in his platform, he is catering almost exclusively to white interests. He is pro-military, pro-veterans, pro-police, pro-second amendment, anti-war, anti-immigration, anti-Islam, and promises to cut taxes. Further, he promotes America-first, economic protectionism for the sake of the lower middle class. What can a healthy white American not like about this? He has been this way for most of his campaign. Further, he has had his opportunities to diverge from his platform and he never did. He could have piled on the Alt Right when Hillary slammed us and called us deplorable. Romney and McCain would have, I’m pretty sure. It would be the politically correct thing to do, and those two are both politically correct guys. But not Trump. Thankfully, not Trump.

I really believe Trump will win and become our 45th president largely because he is not doing any of that. White people, especially ones with spunk and attitude, are his bread and butter, and he knows it. At the same time, in playing a weaker hand like they have been forced to do, the Democrats will most likely recognize their mistake. In the despair of defeat after the election, they will understand that they had forgotten the all-important Race Rule. Gender simply does not have the cachet of race. The only way that Hillary’s gender card could ever best Trump’s race card would be if by sheer numbers there just aren’t enough race-identifying whites in the country to vote for Trump. I don’t think we are at that point yet. However, if Hillary does win, then we will know, sadly, that we are.

On the other hand, if Trump wins, I can predict with a good amount of certainty that Hillary Clinton will be the last white person the Democrats will ever nominate for president. From November 9th, 2016 on, whites as potential Democratic nominees will be done. Finished. The Democrats will not make the same blunder again. From 2020 until this nation crumbles under its own multiracial weight, the Democrats will play the race card for all it’s worth, and with increasing stridency and desperation. They will do this because whites are beginning to wake up and play their own race card. And this is a Beautiful Thing.

The Race Rule above states that Race Trumps Everything. But there is a corollary we should add and never forget: Race Trumps Everything Except Race. If whites adhere to this rule, and banish those who don’t from our political leadership in the Republican Party, then the Republicans will have a hell of a chance to keep on winning after Trump takes the prize in November.