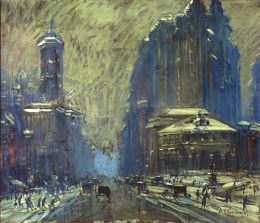 In March of 1960, the New York Times ran a long front-page story under the headline ‘Life on 42nd St. A Study in Decay.’ The reporter, Milton Bracken, noted that ‘it is frequently asserted’ that 42nd Street between Seventh and Eighth Avenues ‘is the “worst” in town.’ As evidence, Bracken adduced the ten ‘grinder’ theaters on the block showing racy or violent films from eight A.M. to four A.M., and the ‘male perverts’ who ‘misbehave’ during the shows; the homosexuals and transvestites who gathered on the sidewalks; the arcades in the subway stations at either end of the subway stations at either end of the block, whose pinball games and shooting galleries attracted drifters and runaways; the con artists bilking soldiers and unwary tourists, and the bookstores peddling ‘second-hand magazines featuring pictures of women stripped to the waist.’

In the light of retrospection, of course, the dreadful depths of 42nd Street circa 1960 sound fairly innocuous. And in fact, Bracken was at pains to distinguish between the street’s increasingly noxious reputation and its daily reality. The youthful ‘deviates,’ he writes, may have been material for the psychiatrist, but not for the policeman. The drifters in the arcades could be counted on to comply when the officer on the beat shooed them away. The knives on display in the stores were for show rather than for battle. The jukebox in the IRT arcade was wholly devoted to opera. The police made relatively few arrests on an average night. Forty-second Street was an ‘enigma’ in an otherwise healthy city . . . (This and all subsequent Traub quotations are from Chapter 9: “The Pokerino Freak Show.”)

Of course, for one who knows what to look for, and especially in hindsight, the warning signs were already there. But there is still the question of how a relatively harmless and contained zone, not even a proper red light district of the sort that Guillaume Faye writes about and argues for in Sex and Deviance, became the monstrosity that featured so prominently in Martin Scorsese’s Taxi Driver a mere fifteen years later.

Traub notes, “This moment in the early 1960s marks a middle point in the downward spiral of 42nd Street.” Later in the decade, some important events would happen that would push Times Square, and New York City, and other American cities, over the edge into full-scale urban decay. Their coincidence with the counter-cultural revolution taking place at exactly the same time should be noted.

The first stag films were introduced into Times Square by Martin Hodas, a Jew from Brooklyn, in 1966, and quickly became popular. For many years, pornography was illegal, but that changed in the 1960s.

Police enforcement might have eliminated, or at least suppressed, this new level of erotica, but starting in 1966, the Supreme Court issued a series of decisions extending the First Amendment protections to explicit sexual materials. Real estate in Times Square had always adapted to the most high-profit uses; now, with remarkable speed, pornography became the boom industry of 42nd Street and Eighth Avenue. Martin Hodas was soon a major producer and distributor of hard-core material, allegedly in collaboration with the Mafia . . .

All of this was bad enough. But there was one more ingredient which, when coupled with the ethic of permissiveness described above, proved a disaster. Traub continues the tale of New York’s – and urban America’s – downward spiral:

In 1960, the decay of 42nd Street had seemed anomalous; but by the end of the decade, the downtown of virtually every old northeastern and mid-western city had begun to totter, or collapse. Suburbanization had robbed the department stores and the restaurants and the movie theaters of their customers; and as companies followed people, the cities’ employment base had begun to dwindle as well. And just as middle-class whites were decamping, large numbers of blacks, most of them poorly educated and unskilled, were migrating up from the South – 2.75 million between 1940 and 1960 alone. They were arriving just as the low-level manufacturing jobs they might have taken were leaving. It was a recipe for catastrophe. Crime rates, which had been remarkably low during the urban efflorescence in the middle decades of the twentieth century, began to surge. New York City had 390 murders in 1961; by 1964, the number had reached 637. In 1972, almost 1,700 New Yorkers were killed – a more than fourfold increase from barely a decade before. The number of reported robberies almost tripled from 1966 to the early seventies. Not only the volume but the nature of crime changed; knives and blackjacks gave way to the Saturday Night Special. Heroin hit the streets around 1964. The combination of guns, drugs, and enormous amounts of cash produced a lethal dynamic.

Of course, to an earlier generation of right-wing thinkers like H. P. Lovecraft, the fate of New York City had been sealed long before. In a letter to Robert E. Howard in March of 1933, Lovecraft wrote:

Civilisation is a place where human intelligence has tried to minimise the wasteful element of mere blind individual survival-struggle in order to let individuals at least partly attain and enjoy the objects of struggle. Incidentally, though, don’t take New York as a typical specimen of civilisation. That especial place has moved past the zone of civilisation into that of definite decadence – being rotten, as it were, before it is ripe.

While Times Square has since been cleaned up by massive commercial development in conjunction with Mayor Giuliani’s crime policies of the 1990s, the situation facing many American cities today is not that different from what happened to Times Square between 1960 and 1980. The loss of manufacturing jobs, further facilitated by globalist trade agreements like NAFTA; widespread availability and use of drugs, which grow ever more dangerous as new synthetic compounds made in Mexico, China, and elsewhere flood American streets; sexual perversion and immorality that is now not confined to a red light district or even an urban area, but is ubiquitous in media and entirely mainstream; and finally, the unprecedented demographic changes which have filled American cities with ever-growing numbers of low IQ, high crime populations.

And yet, in the first half of the twentieth century, before these changes, Americans dreamed of the city of the future, filled with technological wonders and things of beauty and quality. But that dream became – to use a phrase from the black poet Langston Hughes – a dream deferred. America’s cities were victimized by profiteers, experimented on by social engineers, and then abandoned and ignored, like a mugging victim in old Times Square.

President Trump has vowed to “rebuild” America’s cities. He has dared us to once again Dream Big. In taking up that mantle and dreaming again the old dreams, we would do well to also remember the mistakes of the past, and the nightmares that they created.