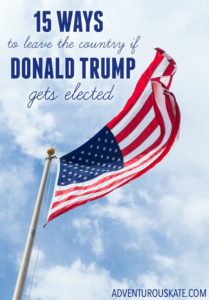 We did it. We survived Hillary. We’ll be protected for four years at the executive level and for many more on the judiciary. A president Trump, though he may not agree with us, will respect our right to free speech. His Supreme Court appointees will defend us for far longer. Our defense has been established.

But we don’t have much time. In 2020 the US will be far less white. Many white baby boomers (who disproportionately vote Republican) will pass away while more non-whites (who mostly vote Democrat) will enter the nation through the “big beautiful door” in Trump’s wall, and many more still will become old enough to vote, having entered the country through their mothers’ wombs around a decade-and-a-half ago. Unless the economy takes a huge, unlikely upturn, and the Democrats nominate someone as corrupt and uncharismatic as Hillary Clinton, our protection from the executive branch will expire in four years. Fortunately, the Supreme Court will be packed with Trump appointees and will at least continue to protect us so long as the hearts pro-free speech justices beat in sufficient numbers. But there’s no telling how far a lawless, vengeful Democratic president will go in spite of the court’s rulings.

Even if Trump is re-elected in 2020 we cannot allow him to placate white unrest. We have to keep the proverbial fire going.

This is not to say we shouldn’t celebrate his victory. Trump has put forward a herculean effort. He has beat incredible odds. He won by small margins in many states. He was like a master chess player cracking a computer opponent’s seemingly impenetrable code with subtlety and unexpected bold maneuvers. He has run what may be the best political campaign in US Presidential history.

Ultimately, however, his efforts will be nothing but a vain delay of white demise. He may think he has the answers, but in the long run he doesn’t. We do.

We can pay homage to Trump by becoming emboldened by his victory. We can repay him by working even harder to convince fellow whites that an unapologetic white identity is our moral right and that our long-term existence as a living people depends on having areas where only we as whites may dwell.

It may seem like an impossible task, but consider how nobody thought Trump would win the primary. What’s more, he was projected to be among the worst to match up against Clinton. Jeb Bush, Marco Rubio, and John Kasich all fared better versus Clinton according to polls. But Trump didn’t listen to the naysayers. He listened only to his vision and created himself in a Nietzschean sense. He created himself as president. We need to have that same kind of vision. It’s the only way we’ll make it.

We are not race-blind civic nationalists like Trump. We are White Nationalists, but we can use his tactics and his spirit as motivation. The ball is now in our court, and we’re on a campaign to win the hearts of white people and convince them of our beliefs.

I feel as though we have a lot left to do in terms of articulating our position. Counter-Currents is one of the foremost intellectual hubs for the exchange of ideas — ideas that will help us to justify our beliefs, not necessarily to our opponents, who will always oppose us to one degree or another, but to our race and to members of other races who want to see whites prosper. Now is the time to turn up the heat, and supporting Counter-Currents [2] is a good first step.