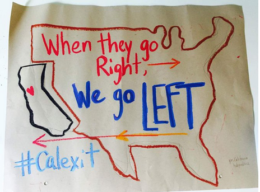 “The last mass trials were a great success. There are going to be fewer but better Russians.” —Ninotchka

If a red state like Montana or Idaho proposed secession after Barack Obama’s election, Leftists would have been screaming for nuclear war, because no white cis-het scum should be allowed to opt out of their utopia. When Leftists have power, they want to use it, and your consent is not required.

When Leftists feel they are out of power, however, secession suddenly becomes an option. The first rumblings of blue state secession came after George W. Bush defeated John Kerry in 2004. Now the idea is being floated again for California (“Calexit”) and even the whole West Coast. It is actually one of the more sensible pronouncements emerging from the Left’s gibbering nervous breakdown in the aftermath of Trump’s victory, and White Nationalists should take it seriously.

The goal of White Nationalism is to create sovereign homelands for all white ethnic groups. (And, in the process, sovereign homelands for non-white groups from which we wish to separate ourselves.) There are two ways of going from multicultural to homogeneous societies: moving borders and moving people. Moving people keeps borders constant and resettles alien groups. Moving borders keeps patterns of ethnic settlement constant and adjusts political entities to match them. There are two basic ways of moving borders and peoples: the Czechoslovak model and the Yugoslavian model, i.e., orderly and peaceful [3] or violent and chaotic. The end results are usually the same, but the path of violence is much more costly.

Obviously, there is a strong prejudice in favor of retaining territory, but ethnic homogeneity and social peace are higher values, for which ethno-nationalists are willing to sacrifice real estate. Which brings us to the California Question.

I hate to say it, because it is one of our most beautiful states, but culturally and politically the rest of the nation would be much better off if California simply fell into the Pacific. A Calexit would be the next best thing. If California seceded:

In short, after Calexit, there would be fewer but better Americans.

We don’t even need to lose all of California to reap the benefits of Calexit. Blue state secession becomes far more complicated when one looks at the electoral map on the county rather than the state level. Suddenly monolithically blue states turn out to be seas of red with only small, dark blue urban patches. The blue state secessionists may think of themselves as dismembering America of vast chunks of territory, but we see only small blue tumors that might neatly be excised from the body politic. 2012 US Presidential Election map by county

When Malaysia wanted to decrease the numbers and power of its Chinese minority, it simply drew a line around Singapore, where most of the Chinese were concentrated, and gave them their independence. They increased Malay sovereignty and homogeneity by subtracting territory and population. White Nationalists should seriously consider the Singapore solution for America’s non-white zones. New York, Chicago, Miami, Philadelphia, Los Angeles, and the Bay Area should become separate city states, whether they remain part of the US or become sovereign.

There have been more than 200 proposals to partition California over the years. If California were to be partitioned into multiple states, some of them would be predominantly white demographically and red politically. For instance, wealthy businessman Tim Draper’s 2013 proposal to partition California into six states [5] would have resulted in three dark blue states and three red states, although only one of the latter—Jefferson [6], in the north—would have been overwhelmingly white. (The proposal would have been on the November 9, 2016 ballot, but, unfortunately, the political consultants hired by Draper cheated him by turning in large numbers of invalid signatures.)

Because of California’s vast agricultural industry, which favors low-tech Mexican stoop and squat labor, one cannot simply excise the urban tumors. Napa, Sonoma, and the Valley must also be carved off.

Such a partition would place most of the state’s non-whites and Leftists in California. Thus, if California remained in the union, Jefferson would neutralize a great deal of its negative influence by canceling out its senatorial vote and many of its representatives and electors. And if a Calexit took place, the whiter and politically healthier state of Jefferson would remain in the US.

Now there are diehard Californians who want to “Make California America Again.” But at this point, California is more likely to make America resemble it. Furthermore, if California became independent, it would be highly unlikely to ever return to the United States. An independent California would quickly replicate Mexico’s political and economic system: a vast population of low-IQ non-whites working in low-wage, low-tech plantation and sweatshop jobs, ruled over by an elite of sociopathic plutocrats mouthing Left-wing slogans. There would be soul-killing poverty, savage criminality, and stifling corruption. This system, moreover, would be cemented in place by non-whites and white Leftist immigrants from the US, as well as by the exodus of sensible whites from California. The only real way to Make California America Again is the state of Jefferson. We have to let go of the rest.

What about proposals for the entire Left coast to secede? There are problems with this. Each state would have to secede separately, then link up together. Moreover, large chunks of both Washington and Oregon would probably opt to remain in the United States. Both Oregon and Washington have lots of liberal whites, but not a lot of non-whites. If California seceded, but Washington and Oregon stayed put, the non-white and ultra-Left populations of Oregon and Washington might simply emigrate, which would mean fewer but better Cascadians, leaving only the Northwest Front to agitate for secession.

Can Jefferson and Calexit really happen? Yes. There is a long history of such ideas [7], and present-day initiatives are already underway [8]. The idea of a state of Jefferson [6] has been around since the 19th century, and it has active proponents and supporters today. Even more importantly, both partition and Calexit are supported by both mainstream politicians and wealthy businessmen. I have already mentioned Tim Draper’s initiative to partition California into six states, including Jefferson. Calexit, also known as the Yes California Independence Campaign [8], has attracted the support of such businessmen as Shervin Pishevar, Jason Calacanis, and David Morin, as well as California State Assemblyman Justin Low.

In spite of Donald Trump’s clear desire to unite America behind him, the Left will continue to polarize the country on racial and ideological grounds—and the Alternative Right will do all it can to keep triggering them. Now we will also work on memeing both Jefferson and Calexit into existence.

Movements like Calexit and the widespread anti-Trump protests make it clear that Leftists don’t just have different opinions from us. They really hate us. And why continue to live with people who hate us? If this were a marriage, it would have ended in divorce long ago. Consider some of the leading “irreconcilable differences [9]” given for divorces: strong lifestyle differences, strong differences between work and spending patterns, lack of trust, lack of reciprocity, constant bickering, long-simmering resentment, contempt, and failure of the relationship to meet the emotional needs of one or both partners. All of these pertain to the Left-Right split in America. It is time to go our separate ways.