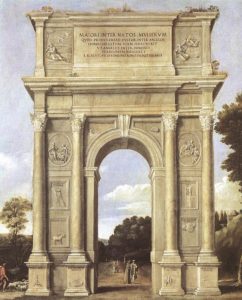 With the election of Donald Trump, the white race has won an important battle in the War of White Dispossession. Without exaggeration, this moment is very likely to be recorded by future historians as an important turning point, as a watershed moment, one of several fateful moments in the course of our history when the white race was saved in a desperate situation, on a par with Battle of Tours or Siege of Vienna.

Donald Trump’s victory will also certainly inspire European nationalists in reclaiming their countries and control over the destinies of their people. It is encouraging to see Trump’s transition team already develop contacts with European nationalists [2] and their support of his victory. This mutual good will indeed strikes a deeper chord. It implicitly evokes the unity of the white race and the joint struggle of its different members against its common enemies.

EU leaders go out of their way to tell us that we are “in the same boat” in order to convince us of the necessity of being subject to this supranational, globalist organization, which essentially functions to dispossess and replace ethnic Europeans in their own lands.

As paradoxical as it may sound to the ignorant though, Trump’s particularistic nationalism has already done more to awaken a wider sense of belonging among Europeans and European-derived peoples around the world than the European Union could ever achieve throughout its existence. We are indeed coming to realize that we are “in the same boat” as a race, and we don’t need supranational globalist organizations like the EU to remind us of that.

Such fateful occurrences, however, become historic only if correct actions continue to be taken after them and events continue to be pushed in the right direction. Just as the lifting of the Siege of Vienna at the time did not yet guarantee the liberation of Europe from the Ottoman Turks, the election of Donald Trump does not yet guarantee the reversal of white demographic displacement and creation of homogeneous white countries.

We on the Alt Right realize that the civic nationalism represented by Trump and the mainstream nationalist parties in Europe is not the solution to the ills plaguing Western Civilization. The real threat is the potential disappearance from the face of the earth of the very biological entity that gave rise to this civilization in the first place. People are attracted to civic nationalism out of an inborn love for their country and culture, out of a wish to live in an orderly and functional society where the rule of law is implemented and people can prosper. They are, however, completely oblivious to racial realities determining the course of the culture and the functioning of a society or at best consign them to factors of secondary importance.

Let’s use the recent American elections as an example. Although Trump’s message was directed towards all racial groups, it is clear that it appealed overwhelmingly to whites. According to official reports Trump received 58% of the white vote, 30% of the Hispanic vote, and only 8% of the black vote. Firstly, the white share of the vote is an understatement, since Jews and other Middle Easterners are classified as white, in spite of their ethnic identities, loyalties, and voting patterns being different from and even inimical to European-derived peoples. We can therefore safely assume that between 65-70% of European-Americans voted for Trump. Moreover, the increase in the non-white vote share that Trump received compared to previous Republican candidates, which is being touted by his team, is largely an illusion. This increase mostly owes to low non-white turnout; non-whites who have previously voted and/or were likely to vote for Democratic anti-white candidates simply were not enthused by Hillary Clinton and stayed home, whereas the small minority that voted Republican in previous elections did cast their votes. In other words, Trump did not really win any additional non-white supporters for the Republican Party.

The same pattern can be observed in other western nations with significant non-white populations. In Germany, for example, the PEGIDA movement continues to appeal overwhelmingly to native Germans, and its rallies are almost exclusively white, in spite of its leaders going out of their way to present it as solely an anti-Islamic movement where all non-Muslim residents of Germany, obviously including non-whites, are welcome.

With time this racial divide will only grow stronger and stronger as the Left continues to agitate non-whites against any kind of manifestation, however timid, of national pride by white populations. Soon enough it will dawn upon more and more civic nationalist whites that there is something deeper and stronger that binds them together and sets them apart from their adversaries than their wish for law and order, safety, and national sovereignty. A lot of us in the Alt Right were awakened to racial realities through our desire for functionality, efficiency, and productivity, and the realization that these virtues — which are the hallmarks of western countries and set them apart from the rest of the world — are gradually disappearing from our societies. Then came the realization that this gradual decay correlates with the increase in the non-white population. Likewise, it will dawn upon more and more whites with even residual love for their culture and country that the more non-whites increase in numbers, the harder it becomes to preserve and cultivate the values that they have cherished.

Add to this more philistine, but nonetheless important and conspicuous, everyday concerns, like buses and trains being increasingly off schedule, streets becoming dirtier and dirtier, traffic rules being violated more and more, bureaucratic procedures being processed less and less efficiently, etc. Any sane realist not completely brainwashed by Leftist anti-white, egalitarian propaganda will soon become aware that the increasing number of non-whites is the main culprit for all these malfunctions.

Any western country will function most efficiently and become most prosperous if it is a homogeneous white country. Whites are the most efficient workers, most honest people, and most creative and daring thinkers. Even without a conscious ethnic loyalty to white people, a coherent pragmatist who upholds functionality, efficiency, and safety as the most cherished virtues would opt for making the West homogeneously white. Hence, civic nationalists and even many apolitical philistines might be swayed towards racial nationalism. In one his exchanges with the then Breitbart editor-in-chief and his current chief strategist Steve Bannon, Donald Trump expressed his wish for qualified Asian graduates from Ivy League colleges to stay in the U.S., so that they can make a positive contribution to the country, to which Bannon replied that we are not only an economic community but rather a civic society [7]. Trump’s position obviously rests on a narrow pragmatist perspective and the premise that anyone with a high IQ and valuable skills will have a net positive effect on the community, regardless of his ethnic origin. However, if one follows the pragmatist line to its logical end, a convincing argument can be made not only against the immigration of low IQ welfare-dependents from the Third World, but also against immigration of skilled non-white professionals.

The net contribution of an individual to a society is not measured solely in terms of his performance at a particular job for which he was hired, but rather through the combined effect of all his character traits and idiosyncrasies. Even if the non-white applicant is superior to white applicants on certain standardized measures important for a job, this does not mean his contribution will be a beneficial one. Quite the contrary, since he will not have the same affinity as a white candidate would have to the nation-building stock, he will be far more likely to use his skills for personal gain, instead of implementing them for the general good of the community. In most cases, as he gains personal advantages over others and improves his standing, he will likely be using his newly acquired powers to the detriment of society.

White societies have been prosperous not solely due to white high IQ and efficiency in work, but also due to strong group cohesion and high mutual trust. Honesty and conscientiousness are just some of the many character traits that uniquely set us apart from other races and that have ensured our success. In the above-mentioned exchange, the most coherent reply which captures the issue at its root would have therefore been “we are not simply an economy, but a racial community.” All in all, identitarianism and irrational loyalty to one’s race are in fact quite functional and effective evolutionary mechanisms ensuring the survival of any population group and the smooth functioning of a society.

Oswald Spengler posited that the Faustian idea of a nation rests on the concept of dynasty, which derives from our yearning for the infinite and being in essence a history-conscious people. What he meant was a dynasty of rulers. However, this notion can be generalized to include the whole population. After all, the whole ethnic group in itself represents a “dynasty” — i.e., a continuation of the bloodline. In spite of what mainstream propaganda would have us believe, consciousness of one’s ancestry has indeed been one of the cornerstones of Western Faustian culture, even despite the adoption of an alien Middle Eastern religion that scorns that notion. Our institutions of nobility and knighthood strongly rest on ancestry, and this sets us apart from other cultures. The notion of ancestry has been introduced even into the Christian concept of sainthood and gave rise to the “Adelheilige” (noble saint).

It should come as no surprise, then, that the materialist and scientific part of our culture would also be heavily influenced by the concept of ancestry and move forward along these lines. Faustian man aims for the infinite, and this yearning induces him to search for the root cause of every phenomenon, beyond the superficial. Thus the very concept of race, and of a racial view of history and society, could be regarded as unique notions that could have arisen only in a civilization like ours, with our peculiar characteristics.

In modern times, it is we, the race realists who clearly and methodically articulate the subconscious urge of our people. Faustian man strives for roots, for ancestry, both in nation building and in explaining the world. No amount of backpedaling, no amount of disavowal of White Nationalism, of “racism” or “xenophobia” by the civic nationalists can suppress this urge.

A racial view of history, society, and human behavior is the future of Western Civilization, and we in the Alt Right are its intellectual vanguard.  Racialist thinking has been suppressed since World War II by alien elements within us, but it is our natural yearning and the organic continuation of our way of understanding the world.

In the beginning of the 19th century, Napoleonic France was spreading the ideals of the French Revolution. Its decisive defeat, however, did not stop the spread of those ideals and their eventual triumph. By the end of the century liberalism had triumphed all over the Western World. Likewise, in the 20th century, Hitler’s Germany was the harbinger of a new revolutionary worldview. Like its equivalent in the 19th century, it also suffered a crushing defeat, which, however, will not prevent the eventual triumph of the ideals it propagated. In terms of comparative historical dimensions, we may therefore be living in an age when racial nationalism will finally become the triumphant ideology of the West. It may happen in our lifetimes and sooner than we think. The future belongs to us.