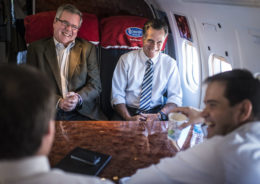 One of the more interesting things about this current election cycle is that it has been forcing many of us on the Right to redefine who we are. Maybe not so much for long-time readers of Counter-Currents and other sites aligned with the Alt Right, but for normies and ex-normies, candidate Donald Trump has forced us to choose in a way we have never chosen before. Are you Right-wing? Or are you conservative?

Once upon a time these two terms were nearly synonymous. Right-wingers were by default conservative and vice versa. Throw in the equally explosive moniker ‘hawk’ and you have the fairly powerful coalition that got George W. Bush re-elected in 2004. Fast forward twelve years and we find that immigration has changed all of this. Normies face a fork in the road which they have never faced before because they know that a good chunk of their fellow travelers will not be following them no matter which way they go. Indeed, they might even find themselves with new fellow travelers, which can be quite disconcerting.

So what do the terms “conservative” and “Right-wing” mean then? A conservative, in this case, is a classical liberal with varying degrees of Christian or traditionalist temperament. A person who supports the Constitution as it has been amended and who goes to Church regularly and opposes abortion and gay marriage and black-white miscegenation can be accurately considered a conservative. Note, however, that a conservative is not necessarily a political creature. Or, if he is, he is not necessarily going to vote one way or the other based on his conservatism. For example, many American blacks can be considered conservative based on the definition above, yet they overwhelmingly vote Democrat. “If she can’t use our comb, don’t bring her home” is a common expression among blacks to discourage miscegenation. Blacks in California in 2008 for the most part opposed the Proposition 8 ballot initiative which would have legalized gay marriage. Furthermore, abortion remains a highly controversial subject among blacks.

These are not liberal people, yet they vote liberal. This is because “conservative” these days describes more a way of life than a political choice. Hence we laugh at so-called “conservative” pundits who believe the GOP should reach out to blacks or other minorities based on whatever conservative values they share. If American blacks saw conservatism as a political position, they would have reached out to the Republican Party a long time ago, not wait around for the Republicans to come to them. We call the GOP the stupid party for many reasons, and this is one of them. To be sure, conservatism can be part of the political choices we make, but based on the voting patterns of American blacks and others, there’s something else going on.

That something, is, of course, race. People either vote as their tribe votes out of mindless solidarity, or, if they are more politically aware, out of their tribe’s immediate interests. In the case of blacks, who, compared to other races, lack the impulse control, talent, and IQ to compete well in a first world economy, their interests coincide with the political party that doles out the most free goods, services, and privileges. Hence their fealty to the Democratic Party.

Most conservatives who disavow Right-wingers do not believe any of this. It take a cynic to believe it, it is true. And Conservatism as we know it today is not cynical. If you believe in God or some kind of divine, overarching order of things, you’re not a cynic. If you follow the Ten Commandments or any other ancient table of ethics, you’re not a cynic. If you love your ancestors and wish to give many offspring to the future, you’re not a cynic. If you truly believe that blacks and other minorities will embrace laissez-faire economics on its merits and ignore the racial inequality it creates, you can’t possibly be a cynic. Just the opposite perhaps. The conservative ethos, as tempered by Christian morality and the free market, is a beautiful thing, an elegant intellectual and spiritual construct which has guided Westerners to create the greatest civilizations in history. One would have to be a cynic to turn one’s back on that. I believe that conservatism is so attractive and so mesmerizing that many conservatives would rather be wrong than cynical. This is the point of weakness at which wish replaces thought.

A Right-winger, on the other hand, is first and foremost a political creature. And political creatures must be at least somewhat cynical. In other words, they will reach for Machiavelli before the Bible or Burke. Where conservatives and liberals debate, Right-wingers and Left-wingers fight. The former two can easily coexist, especially if they are all of one race. The latter two cannot, mostly because Left and Right wrangle over the murky grounds of race, and have been doing so for over a century. These days in America, the Right and the Left fight over votes, with the Left ruthlessly cheating and the Right ruthlessly exposing them for it. Soon enough – say, in the next twenty years — this fighting will move to the streets with fists, knives, bottles, guns. We will have dozens of little Bleeding Kansases all across our country as Right and Left slug it out over political and cultural control of their neighborhoods.

But what do Right-wingers stand for these days? Certainly not the divine right of kings as they did during the French Revolution when the terms Right and Left were coined. Certainly not conservatism, even though most on the Right are conservative in their day-to-day lives. Certainly not the adverse of everything Left. Of course, that’s part of it, but it is merely a corollary to what really drives the Right (and the Left) these days. And this is the very thing that non-Right wing conservatives disavow: race.

Of course, the concept of race encompasses many shades and flavors, and therefore is anything but simple. Under the Right-wing banner we would have to admit white supremacists along with the more peaceful White Nationalists, white identitarians, and white advocates. Included as well would be proponents of Western civilization who are chauvinistic about everything Western except race. Whether you wish the races would separate into nations or promote cohabitation under Pax Caucasica, you would still be a right-winger. There would remain plenty of room for bickering, of course (when wouldn’t there be?). Yet we would all correctly view the most important struggles of our day, at least in America and Western Europe, as being white against non-white.

White interests, when not threatened by non-white interests, are laid out nicely in the US Constitution. They consist mainly of limited government, freedom, and democracy which revolve around the very white concept of human rights. These things, along with capitalism, bring out the best in white people – when reasonably regulated. The Constitution, as it originally appeared, countenanced absolute freedom as much as it countenanced absolute democracy – namely, not at all. Furthermore, with mass-transportation unheard of in the early days of the American republic, pure capitalism didn’t pose the same threat to the white race that it poses today. It wasn’t as if Alexander Hamilton could easily supplant indigenous whites with millions of low-wage, brown-skinned laborers in order to make a buck.

These days, whites are being encroached upon by millions of non-whites who, by their genetic nature, do not thrive in the environment created by the Constitution. They require powerful governments, less freedom, and less democracy. They cannot compete as well as other races, and so must rely on government to help maintain their precious illusion of equality. They don’t mind that this breeds corruption, accrues debt, and invites decline. They are also perfectly happy to let others pay for the charity they enjoy. They simply do not care because their allegiance is to their race, not our country. And, frankly, they are not smart enough in general to realize that the parasitic policies they pursue will eventually kill the country that hands out the largesse upon which they rely.

Because Conservatism as we know it existed well before the 1860s when the current trend of racial mixing in the Northern hemisphere got started, it does not have the vocabulary to deal with race. To its architects, race was a minor thing: the French versus the English, the Poles versus the Russians. Sure, there would be conflict every once and a while, but, for the most part, people got along. Without realizing it, they had more in common than not.

Today, this is not the case. Whites are living with countrymen with whom they have very little in common genetically. This dissimilarity is so great and so immutable that it is beginning to threaten the principles upon which most modern Western nations have been founded. Right-wingers recognize this, and therefore have become vital to the survival of the West. Conservatives do not recognize this, and therefore have become outdated.

In essence, conservatism is what Right fights for, but to actually fight for it is not conservative.

The fight itself is ugly and bloody and racial, a far cry from the beatific ruminations of an Edmund Burke. Sadly, there is no other way. Both sides fight for two things: The Right fights for the white way of life and to be rid of the non-whites who threaten that. The Left, on the other hand, fights for the non-white way of life and for the ability to exploit white people. That’s the struggle in a nutshell. It must be fought and it must be won.

As Samuel Huntington pointed out in his classic Clash of Civilizations, culture follows power. If the Right wins this thing, we will have the experience to introduce much-needed racial elements to conservative thought and the political capital to impress it upon the masses until it becomes irrevocably part of their culture. This will be a Good Thing.

If the Right loses, however, the enlightened conservatism it fights for will be replaced with the more brutal and primal conservatism of kings and warlords and harems and slaves. That’s conservative too, let’s not forget. There’s nothing “liberal” or “Left-wing” about clitorectomies or stoning women for adultery or hanging men for sodomy. Is there?

Put bluntly, if the race-realist Right is vanquished, conservatism as we know it will die. And the last people to realize this will be the conservatives themselves.