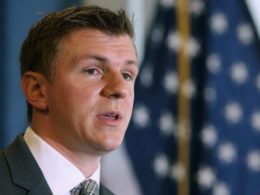 About the Project Veritas Action undercover [2] investigation of the 2016 Hillary Clinton campaign, I would like to make a small point. Because a big point, in my opinion, might not be as useful.

What is the big point? Obviously, it’s that Hillary Clinton is rigging the election. According to the PVA videos, Democratic operatives paid mentally ill individuals as well as AFL-CIO tough guys to start fights and incite violence at Donald Trump rallies. In a couple instances, these operatives are caught on camera bragging about shutting Trump down in Chicago. Last March, candidate Trump tried to hold a rally in Chicago but was forced to cancel since the thousands of protesters in the streets would have made the event unsafe. This was Hillary’s doing, according to the PVA videos. In addition, undercover video clips of Democratic operatives reveal the Democratic use of busing voters across state lines to vote illegally and also their methods of falsifying employment and residence records in order facilitate this illegal voting.

I choose not to make this big point for two reasons. First, everyone else is, so adding my weight to it isn’t going to change much — although, I do agree that the big point must be made, as Trump did twice in the third debate. Chateau Heartiste has been banging the drum [3] nicely as well. Secondly, the big point isn’t going to win over many of our enemies. Yes, I know, most of them are lost causes. Many are demented cultural Marxists who are twisted with anti-white hatred. Or perhaps hating men and killing babies is so central to their identities that any candidate promising to put pro-life judges on the Supreme Court will be beyond the pale for them. Nothing will change the minds of these people, quite possibly because they are not using their minds to begin with.

On the other hand, there still are reasonably well-informed moderates and liberals out there who plan on plopping for Hillary simply because Trump is not part of their liberal, college-educated, CNN-watching, upper middle class tribe. Trump is just too crude and boorish for them to take seriously. Therefore, any outlandish thing coming out of Trump’s big mouth will just roll off their backs like water off a seal. Remember, Trump also tried to link Ted Cruz’s father with the Kennedy assassination. Trump has said a lot of outlandish things. So then why would accusing Hillary of rigging the election be any different? These are people who still read Time magazine and the New York Times and listen to NPR on top of paying attention to CNN. So, of course, such people will ignore Trump’s claims that Hillary is rigging the election, even when there’s video to back them up. If it comes from Trump or his supposed minions, then it is automatically suspect. Anyway, mainstream media is keeping mum about it. So, for them it’s like it never happened.

We all know that in Mein Kampf Hitler wrote something to the effect that the masses will believe a lie if it’s big enough. It needs to be said that the masses will also reject a truth for the same reason . . . if the truth is big enough. And Hillary rigging the election is a big truth. Her supporters, the well-meaning ones anyway, will instinctively reject the idea that she is cheating because it would just blow their minds to admit it. The idea is just too big.

A great example from history appears in the story of Ignaz Semmelweis, the 19th-century Austrian physician who noticed the connection between physicians’ not washing their hands and the rate of mothers dying from puerperal fever after childbirth. In his Vienna hospital, medical students would perform autopsies in the mortuary and then come to the maternity clinic to deliver babies. Of course, they didn’t know to sterilize their hands before doing so. After Semmelweis made them do just that, deaths by puerperal fever plummeted.

This story is apropos to our current troubles because the medical establishment at first rejected Semmelweis’ conclusions even with proof that his measures worked. They just could not accept that what we call sepsis today was causing so many deaths. To do so would be tantamount to admitting that they had been killing patients their entire careers. This was too big a truth for many to accept.

So, if you want to waste your time, trying telling an otherwise well-meaning Hillary supporter that their gal is rigging the election.

Better would be to begin with a small point in order to lead them eventually to the big point. Smaller points are easier to swallow. And in this case, the small point is that Project Veritas revealed something fishy.

That Democratic operatives have been caught on video saying all the things they’ve said (including admitting they prefer to ignore law and ethics if it means to “win this motherfucker”) is at the very least fishy. Absolutely no reasonable person can deny that. Perhaps Hillary is 100% innocent. Perhaps she knows nothing about all this. Perhaps her campaign is the most scrupulous in history, and James O’Keefe of Project Veritas is such a multimedia wizard that he is able to reassemble innocuous facts into arrant lies in his editing room. Given all of this, it is still fishy that people getting money from the DNC to run Hillary’s campaign would say some of things found on the PVA videos.

“Okay, so it’s fishy. So what?” responds the Hillary supporter. “Just because something is fishy doesn’t mean foul play is involved.”

This is certainly true. However, we should respond by saying that fishy things warrant further investigation. For example, there were a lot of fishy things leading up to the Watergate investigation, yes? It is the job of the Fourth Estate to follow up on fishy things like Watergate in order to keep the ruling elites honest, is it not? So when it was revealed that one of the Watergate burglars was a ranking member of CREEP (the aptly named Committee to RE-Elect the President), that was kind of fishy, wasn’t it? And once it caught a whiff of such fishiness, aren’t we glad the media followed through on its sacred role of investigation?

A Hillary supporter must answer yes to all of these questions, and not just because Hillary herself was on the impeachment inquiry committee during the Watergate scandal. Indeed, it is the news media’s job to investigate fishy things, especially when they deal with high level politics. By this point, a Hillary supporter will see where this argument is leading but, compelled by their previous affirmations, will be unable to stop it.

The follow-up question should be twofold. First, if it’s the media’s job to investigate fishy things, why haven’t they investigated all the fishy things related to the Hillary campaign? O’Keefe’s people have been undercover for months, and Project Veritas has nowhere near the budget or resources that a combined CNN, ABC, CBS, NBC, NY Times, Washington Post, and all the others have. So why is it that the media kings are being scooped by some insignificant outsider organization? The answer to this question can only embarrass Hillary supporters because it will reveal the mainstream media upon which they rely to be either inept, in on the secret, or incurious because they are afraid of what they might find. There is no other excuse. No reasonable person can therefore take such media outlets seriously for their news.

The second follow-up question should be why hasn’t the mainstream media lifted a finger since the PVA videos to investigate this issue further? They haven’t, by the way. Go to CNN’s website. ABC’s. NBC’s. All of them. See for yourself. None of them have followed up significantly on James O’Keefe’s reporting. But if Hillary is innocent, why wouldn’t they? To do so would achieve the triple whammy of garnering high ratings, exonerating their lady queen, and sticking a wrench in Donald Trump’s motor mouth. Given such felicitous outcomes, why haven’t they followed up? Where are the interviews with Bob Creamer and Scott Foval and the other disgraced stars of the PVA videos? Where are the hard questions posed to Hillary herself? They sure followed up on Donald Trump’s pussygate scandal to the point of saturation. So why not with the PVA videos?

By now, our well-meaning Hillary supporters will realize that he has no answer. This is because there are none that aren’t utterly damning of the mainstream media and the millions they dupe with their biased reporting. Meanwhile, the question of Hillary’s innocence or guilt remains unresolved. They may still believe that Hillary is innocent and they may still intend to vote for her, but this belief will be blocked by an edifice of logic that they helped create.

It may be too late for such a strategy to have any impact on the upcoming election (but hopefully not!). One day soon, however, race-realist, ethno-nationalist whites will find it necessary to convince other whites that they need to acquire a positive racial identity in order to survive. We will have to convince such people that the blacks and the browns and the Muslims they are currently inviting into our country are even more racist and oppressive than they accuse us of being. Due to their reflexive anti-white racism, these whites will not accept such truths right away. They will run counter to everything they have been taught. They will be too big. Such whites would rather fight us than accept our message, which could be devastating to the entire race.

This is why when the time comes to convince these people to join us and embrace the Big Truth, I hope we can find a way to start small.