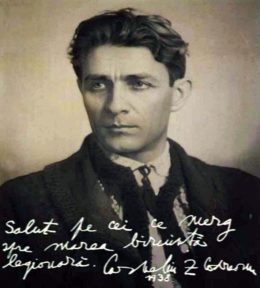 Emil Cioran was a Romanian philosopher who, before becoming a noted esthete of nihilism in the Parisian literary scene, dared to be a hopeful fascist. Translated from the French. Improvements from the original Romanian are therefore welcome. The title is editorial.

Before Corneliu Codreanu, Romania was an inhabited Sahara. Those who found themselves between earth and sky had no content, other than waiting. Someone had to come.

We all traversed the Romanian desert, incapable of anything. Contempt itself seemed an effort to us.

We could only contemplate our country under a negative light. In our moments of maddest hope, we granted it the momentary justification of a good joke. And Romania was no more than a good joke.

We spun around in the free air, empty of past and present, enjoying the sweet debauchery and the lack of destiny.

This poor country was a vast pause between a beginning without greatness and a vague possibility. In us the future moaned. In one, it boiled. And him, he broke the sweet silence of our existence and forced us to be. The virtues of a people were incarnated in him. The Romania of the possibilities was heading towards the Romania of power. I only had a few meetings with Corneliu Codreanu. I immediately understood that I spoke with a man, in a land of puppets. His presence was troubling and I never left him without feeling the irremediable breath, the crucial breath which accompanies existences marked by the inevitable.  Why would I not admit that a strange fear took hold of me, a sort of enthusiasm full of forebodings?

The world of books appeared useless to me; the categories, inoperative; the prestige of intelligence, drab; the subterfuges of subtlety, vain.

The spiritual disaster of Romania stems from thought without content, from intelligence. Spirit’s lack of consistence transforms problems into elements of abstract games and steals from the spirit its character of destiny. Intelligence degrades even suffering into chattering.

When, in 1934, I told him how interesting it would be to tell the story of his life, he told me: “I have not spent my life in libraries. I don’t like reading. I stand here, and I think.”

These here thoughts have founded our raison d’être. In them, breathe nature and the sky.

And when they began their realization, the historical foundations of the country were shaken by it.

Corneliu Codreanu did not pose the problem of the immediate Romania, of modern contemporary Romania. That was much too little. This would not have accorded either with the scope of his vision, or of our expectations. He posed the problem in ultimate terms, in the totality of the national becoming. He did not want to correct the approximate misery of our condition, but to introduce the absolute into the day-to-day breathing of Romania. Not a revolution of a historical moment, but that of history. The Legion would then have to not only create Romania, but to redeem her past, fertilized by an immemorial absence, to save, by an inspired and unique folly, the enormous time lost.

The Legionary passion is the expression of a reaction, in the face of an unlucky past. This nation has shone in the world only by its permanence in misfortune. Never has it been otherwise. Our substance is an infinite negative. Hence the impossibility of overcoming the oscillation between a dissolving bitterness and an optimistic fury.

In a moment of discouragement, I told the Captain: “Captain, I do not believe Romania has a meaning in the world. No sign in her past justifies any such hope.”

“You are right,” he answered me. “Yet there are certain signs.”

“The Legionary Movement,” I added.

And then he showed me how he perceived the resurrection of the Dacian virtues. And I understood that between the Dacians and the Legionnaires was the pause in our being, because we are living Romania’s second beginning.

The Captain gave a meaning to Romania. Before him, the Romanian was only Romanian, that is to say a human material made up of drowsiness and humility. The Legionnaire is a Romanian of substance, a dangerous Romanian, an inevitability for himself and for others, an infinitely menacing human storm. The Iron Guard, a fanatical forest . . . The Legionnaire must be a man in which pride suffers from insomnia.

We were used to the second-hand patriot, gelatinous and empty. In his place, appears the individual who considered the country and its problems with a terrible relentlessness. There is a difference of spiritual density.

He who has given to the country another direction and also another structure united in him elementary passion and spiritual detachment. His solutions are valid in the immediate and in the eternal. History does not know, in this world, a visionary with a more practical mind and with such skill, sustained by the soul of a saint. Equally, it does not know another movement in which the problem of redemption goes hand in hand with the peasantry.

To build and to save, politics and mystique, here are the irreducibles, which he made his end [auxquelles il a mis fin]. He interested himself, in equal measure, to the organization of a mess hall and to the question of sin, to commerce and to faith. No one must forget it:

The Captain was a peasant established in the Absolute.

Each believed he understood him. However, he eluded everyone. He had surpassed the limits of Romania. He proposed to the Movement itself a way of life which surpassed Romanian endurance. He was too great. One is sometimes inclined to believe that he did not stem from the conflict between his greatness and our smallness. It is however no less true that the time of persecution has made emerge personalities that even the most confident utopia would not have suspected.

In a nation of slaves he introduced honor, and in a spineless cattle, pride. His influence has not only shaped his disciples, but, in a certain sense, also his enemies. For these, the scoundrels, have become monsters. He (this) forced him(self) to be strong, he imposed upon them a character in evil. They would not have become hellish caricatures, if the greatness of the Captain had not demanded the negative equivalent. We would be unfair to the butchers, if we considered them to be failures. All realized themselves. One step more, and they would have aroused the Devil’s jealousy.

Around the Captain, no one remained lukewarm. A new shiver passed over the country. A human land haunted by the essential. Suffering becomes the criteria of value, and death, that of vocation. In a few years, Romania has known a tragic palpitation, whose intensity consoles us for the cowardice of a thousand years of non-history. The faith of a man has given birth to a world, which surpasses Shakespeare’s ancient tragedy. And this in the Balkans!

On an absolute level, if I had to choose between Romania and the Captain, I would not hesitate for a second.

After his death, each felt himself to be even more alone, but beyond our loneliness was rising that of Romania.

No quill dipped in the ink of misfortune could describe the misfortune of our fate. However, we must be cowards, and console ourselves. With the exception of Jesus, no death has been more present among the living. Could someone have forgotten it? “Henceforth, Romania will be led by a dead man,” a friend told me on the banks of the Seine.

This dead man has spread the scent of eternity over our human muck, and returned a sky to Romania.