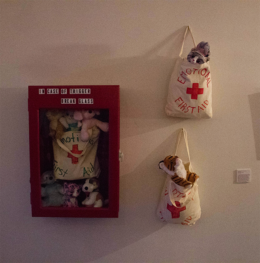 Last Saturday night in Manhattan, a few good shitlords made art history. At the “Daddy Will Save Us” art show, event organizer Lucian Wintrich stated that this was “the first conservative art show in America.” But there really wasn’t anything typically “conservative” about this event — rather, it was the most radically avant-garde art show possible in The Current Year. If this was conservatism, it was revolutionary conservatism.

This was probably best evidenced by the fact that the event was almost shut down [2] after the previous gallery abruptly dropped out due to threats and pressure on Wednesday, leaving event organizers scrambling at the last minute for another gallery to host them. As Wintrich told The Daily Beast [3],

This is the first time since the days of Robert Mapplethorpe that a gallery has tried to restrict free artistic expression . . . We are going to make international news. This is not only the first conservative art show in the country’s history, as far as I can tell, but it is the first time that the New York art scene is trying to make not happen. But the art would have spoken for itself without the logistical drama. While the most prominent piece was a performance art project by the inimitable Milo Yiannopoulos (featuring Milo bathing in a tub of pig’s blood as a protest against globalism), other amusing pieces of artistic talent on display included portraits of George Washington wearing MAGA hats, a McDonald’s menu with MLK’s face on it and also wearing a MAGA hat, and an assortment of “Twinks4Trump” photographs by Lucian Wintrich. Alt-Lite celebrities James O’Keefe, Gavin McInnes, and Martin Shkreli also displayed artwork. By 8 PM, the gallery was packed, as shown on the livestream [6] by Breitbart. There were scattered protesters outside, although only one made it inside the gallery, who was promptly tackled by Gavin McInnes and roughly escorted out after he started yelling and trying to attack attendees. The event also seems to have been well attended by press, and at least one documentary crew. Amusingly, the gallery itself protested their own event by posting fliers everywhere announcing that while they believed in freedom of expression, they would be donating all of the event proceeds to the Hillary Clinton campaign. The night was especially a triumph for artist and organizer Lucian Wintrich, who lost his job this year after coming out as a Trump supporter. He previously helped organize the “Gays for Trump [8]” party at the RNC, also made famous by Milo. He has since started his own company, and is now free to engage in controversial events such as this one. Indeed, it is hard to imagine something more cutting-edge happening in the art world. There’s nothing more tiresome than feminist “artists” protesting the cis-het patriarchy by producing paintings made with bodily fluids. And yet, every time someone does this they are hailed as “brave” and met with nothing but applause from the artistic establishment, now entrenched not only in the art world but in the universities with the rest of the formerly avant-garde Left. Now true anti-establishment radicalism is only possible on the Right [10], and this show was living, breathing, somewhat disturbing proof of that reality.

There was certainly a level of weirdness and degeneracy to this event, which is a feeling that can only be approximated from the pictures and the livestream video. The post-postmodern nihilism of the art and the attendees verged on the grotesque. And yet, the fact that this was one of the only art shows to have been protested since the ’70s should give us some instructive pause.

Modern art is bound up with cultural critique, as are both the Alt-Right and Alt-Lite. Harnessing artistic memes for our own purposes is indeed one of the ways that we can influence and control culture. It is probably undeniable, for example, that the MAGA hat will live on in cultural history as an iconic statement about this moment in time, akin to Warhol’s Campbell’s Soup cans. It is truly the Year of the Shitlord. It’s the new 1968 — but this time, we’re on the right side of history.

And so, while this particularly scene is probably not something that will be embraced by the Alt-Right as a whole, it may have a fairly serious cultural impact [11]; or, at least, it may be the start of new forms of fringe artistic expression that actually challenge the culture, the status quo, and the powers that be. The ripple effect of art as a form of spreading memes — that is, memetic warfare — is something we must continue to use to our advantage. So keep shopping MAGA hats onto unexpected places: you never know who you might trigger, convert, or inspire.