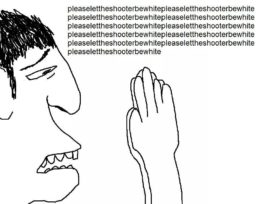 One of the great things about Wikileaks, quite simply, is that they reveal things we already know to be true. Hillary deleted 33,000 emails? Check. Hillary colluded with the DNC to defeat Bernie Sanders in the Democratic primary? Check.

For Trump-supporters, this has all been great since it has been putting the Democrats at least somewhat on the defensive. Rarely, however, do these leaks point to anything greater than the mendacity and corruption of the individuals being exposed.

In one case, however, a leaked email points to something extraordinarily meaningful. On December 2nd, 2015, the day of the San Bernardino terrorist attack in which 14 people were killed and 22 injured, Hillary’s campaign chief John Podesta remarked in an email:

“Better if a guy named Sayeed Farouk was reporting that a guy named Christopher Hayes was the shooter.”

Basically, Podesta was lamenting that it wasn’t a white guy who went on a rampage.

On the exoteric level, Podesta (who can be seen as a mouthpiece of the Democratic political class) revealed three important things:

Of course, none of this is surprising. It is also nice that the GOP has more ammunition to level at Democrats in the days coming up to the election. With a fighter like Trump at the helm, we should all rest assured he will make the most of it.

But Podesta’s comment reveals a lot more than he intended. In fact, it hits at the core of the identity crisis which is troubling whites these days. Many commenters on this site and others have expressed the idea that whites need to re-acquire a racial identity in order to withstand the pressures of political correctness, cultural Marxism, and non-white immigration. After reading Podesta’s email, however, I’m no longer so sure that this is true. I’m beginning to think that leftist liberals like John Podesta already have a racial identity. It’s just a negative one; one that stinks of post-Christian moralizing. People like Podesta believe that whites are inherently sinful people, and the only way for whites to redeem themselves is to internalize this low self-esteem until it becomes part of their identity. They’re not rejecting their race. They’re embracing it as if it were an original sin. This is the path to salvation not only for them, but for all whites.

This also explains the double standard liberal whites have when it comes to race and behavior. Non-whites, who lack this original sin, can get away with a great deal of misbehavior that whites simply cannot. A great example occurred eight years ago when Californians were voting on Proposition 8 which would ban gay marriage. Both the Mormon Church and many black churches committed the nigh-unpardonable sin of homophobia by supporting this ballot measure. They held identical positions on the matter, yet the liberal media would not dare attack the black churches in the way they attacked the Mormons. The blacks, by virtue of not being tainted with whiteness, were deemed inherently good. Therefore, there must be some external reason to explain their blasphemy. The Mormons, who are, of course, white, had no such excuse, and so were mercilessly excoriated in the press and by gay activists. People like Podesta prescribe a strict moral code for whites and only whites to follow. If one doesn’t live up to this code, one is not overcoming one’s original sin, which makes one—you guessed it—sinful.

Now, let’s step back a bit and analyze negative identity. Is it always bad?

Today, however, a racial aspect has replaced the biblical aspect of negative identity. It follows then that since races are obviously different, some races may have negative identity and others not. Our modern elites have done away with the universality of original sin and put negative identity strictly in the domain of white people. And if all or most people on the planet were white, this wouldn’t be so bad. But in the real world, with the proportion of non-whites in white nations increasing rapidly, so is the proportion of people who lack negative identity. Since most of these people are not encumbered by post-Christian baggage to begin with, they probably couldn’t achieve it even if they wanted to. According to the rule above, therefore, times are getting tougher for people with negative identity each day.

I see negative identity as a perversion of what the great poet John Keats described as “negative capability.” In a letter to his brothers from December 1817, Keats writes:

Several things dovetailed in my mind, & at once it struck me, what quality went to form a Man of Achievement especially in literature & which Shakespeare possessed so enormously – I mean Negative Capability, that is when a man is capable of being in uncertainties, Mysteries, doubts, without any irritable reaching after fact & reason.

In art, Caravaggio is loaded with negative capability, from the prominent undersides St. Peter’s dirty feet in Peter Killed (1601) to the flirtatious naked angel in Love the Winner (1602) to modeling his own head as the decapitated David in David II (1606). In literature, one cannot do better than Dostoevsky’s Notes from Underground which presents a character that is equally righteous and loathsome. It’s a fascinating juxtaposition which asks as many questions as it answers. There are plenty of other examples, of course, but the point of negative capability, essentially, is not merely to recognize but to embrace the mystery of life which often trumps reason. This is scary, but is also part of being a complete human being.

In politics, as in life, negative capability starts with accepting facts that are inconvenient to one’s world view. Take, for example, an ethnocentric, racially-conscious Japanese person contemplating the myriad of Japanese war crimes during World War II. Negative identity would be for him to take these sins axiomatically as his own, as if he committed them himself. Therefore, his raison d’être becomes absolving himself of these sins and scorning those like him who don’t share such a perversely altruistic mission.

Negative capability for this person, on the other hand, would entail a similarly frank admission of Japanese culpability of past war crimes as well as an honest sympathy for its multitude of victims while not losing his positive ethnocentric identity. In this, he avoids the “irritable reaching after fact & reason” as described by Keats. He remembers that the Japanese created a great and lasting civilization in spite of their sins, and so embodies the good as well as the bad.

In real life, Jewish-American scholar Norman Finklestein exhibits negative capability when he argues that the obsession that many diaspora Jews have with the Holocaust is unhealthy and destructive both for them and their gentile host populations. One can agree or disagree with his anti-Zionism, and he could be right or wrong about the Holocaust, but the fact that he is comfortable in voicing criticisms of certain powerful aspects of diaspora Jewry without delving into blind hatred or resentment of Jews is a form of negative capability. And this often comes at a price. Finklestein has suffered tremendous abuse and career setbacks as a result of his positions.

In a letter dated from October 1818, Keats goes on to say:

What shocks the virtuous philosopher, delights the chameleon Poet. It does no harm from its relish of the dark side of things any more than from its taste for the bright one; because they both end in speculation.

There’s a lot of wisdom here, wisdom that John Podesta and his ilk tragically do without. They choose to wallow exclusively in “the dark side of things” and then attempt to drag all white people down into that putrid hole with them. And if we resist, that must mean we approve of everything bad white people have done throughout history. It’s really a lose-lose proposition with these people. Joining them would mean our eventual extinction and resisting them means civil war.

What this amounts to is a crystallization of our understanding of white identity. Our greatest enemies are ourselves, and they are every bit as racial as we are. They have their identities and we have ours. Where we on the Alt Right and others have positive identity tempered with negative capability, those who stand with John Podesta and Hillary Clinton have negative identity and are not capable of seeing past that. Sadly, there are also those whites to right of the Alt Right who possess positive identity but also fail to have negative capability. These are people who believe whites can do no wrong and harbor hatred for non-whites simply for being non-white. Fortunately, these people are few and far between.

When Keats coughed up blood on February 3rd, 1820, he knew he was dying of the same disease that killed his mother and brother. He didn’t try to explain it. He didn’t take refuge in philosophical dogma or religious absolutes. He didn’t become nihilistic either. He just knew it was his time and did what he could to stave it off as long as possible. I believe that the white race is coughing up blood as well. Hopefully, however, our prognosis won’t be as dire as Keats’. We still have our minds. We still have our voices. We can still fight. Only history will be able to cure us of what’s ravaging our insides at the moment. It’s up to us however to never relent in promoting positive racial identity and a strong negative capability regarding the human condition.

That is the best way to ensure that history proceeds in our favor.