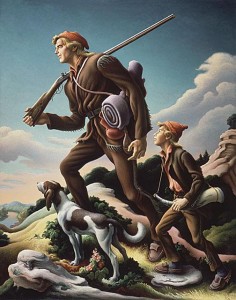 Audio Version: To listen in a player, click here [5]. To download the mp3, right-click here [5] and choose “save target or link as.”

A common opinion among both White Nationalists and our critics is that a specifically “white” racial identity only makes sense in a colonial society like the United States, in which immigrants from many European lands have merged together to form a generic white racial identity, which is distinct from non-white groups like blacks, Asians, and Amerindians. In Europe, however, different peoples think of themselves as Dutch or Italian or Danish first, not merely as white.

There are two problems with this distinction.

First, there are no generic whites, even in European colonial melting pots.

Second, all whites, even those with strong attachments to particular ethnic identities, are also capable of an overarching sense of white racial solidarity.

There are many European colonial societies, in which different European ethnic groups have merged together. But these societies are not all the same. The United States and Canada occupy the same continent and have similar ethnic histories. But English-speaking Canadians are not the same people as Americans. Nor are Americans the same as Australians and New Zealanders, both of which are English-speaking mixed European colonial peoples as well. The same can be said of the Spanish-speaking peoples of the Southern Cone of South America, all of whom have similar histories but are not a homogeneous population.

What differentiates these colonial peoples? First, just to be clear, my argument does not require an account of what differentiates Americans and Canadians. It merely requires observing the fact that they are different. Second, there are many causes of differentiation: genetic, cultural, and environmental. Genetically, the “generic whites” of Argentina and Canada are quite distinct. Culturally, they are distinct because of founder effects (England vs. Spain) and different subsequent settlement patterns. And of course different natural environments select for different industries, lifestyles, and settler populations. Beyond that, nations are differentiated by a host of historical contingencies: wars, revolutions, assassinations, economic crises, natural disasters, technological breakthroughs, the discovery of natural resources, etc.

In short, there is something more to being a white American than simply being white. We are not “generic white people.” We have a distinct white American identity.

It is only an increasingly shopworn civic fiction that allows us to refer to African Americans or Mexican Americans, just as in France there are African or Arab Frenchmen.

Our European cousins are free, of course, to disdain us as deracinated, homogenized, and cultureless (between bites of le Big Mac), but Americans, Anglo-Canadians, French Canadians, Australians, and kiwis are distinct white nations, just like the Swedes, Norwegians, and Czechs.

So when I speak of White Nationalism, I mean two things.

Second, White Nationalism also refers to a sense of wider racial solidarity—a sense of common origins, common enemies, and a common destiny. This sensibility exists at the highest levels of the ethnonationalist movements in all white nations. It can serve as the foundation for alliances, intergovernmental organizations, and treaty organizations between white nations, which can mediate conflicts between member states, create a united front against other racial and geopolitical blocs, and help whites address global environmental and demographic problems.

White Nationalism does not, however, imply grandiose notions like a politically unified white imperium. Empires are generally imposed by violence and maintained by oppression and the erasure of distinct white identities.

Nations can, of course, be coaxed into joining federations like the European Union, which has not yet become a sovereign superstate. But the real test is whether they are allowed to leave. One can still leave the EU. But the South could not leave the United States.

But what about the persistence of Old World national identities in European colonial societies? It is easy to point to long histories of ethnic conflicts between immigrant groups. But over the past few generations, these have been largely erased due to increasing attenuation of Old World ties and widespread intermarriage. Today, when an American claims to be a hyphenated Irish-, Italian-, Anglo-, Polish-, German- or French-American, chances are he is LARPing.

Most Americans’ self-described “ethnicity” is determined simply by their surnames, not their actual descent. I know “Irish” Americans who have an Irish surname because of an Irish great-grandfather, but the other 7/8 of their ethnic heritage is Italian. I know “Italian” Americans who are one quarter Italian, one quarter French, and half Irish, but they are “Italian” because of an Italian surname.

Moreover, in terms of language, culture, and even cuisine, an “Italian” American (who is 3/4 Irish) has more in common with a WASP (who is half Anglo and half German) than he does with his cousins in Palermo or Dublin.

And this is true even of Americans who still happen to be of a single Old World ethnic stock but who have lost any meaningful connection to Europe.

Sure, Americans still celebrate St. Patrick’s Day and Oktoberfest. But increasingly, it is the same people showing up at both events—American people. The American ethnic identity grows stronger, and Old World identities grow weaker, with every generation on this continent and with every ethnic crossing. Eventually, even surname LARPing will disappear. Indeed, many younger Americans already don’t even know where their surnames come from.

Again, I completely share our European cousins’ horror at this process of identity erasure. But the result is not generic white people. If colonial melting pots simply produced generic whites, there would be no differences between Americans and Canadians. But there are differences. Therefore, the product of American history is not a generic white person, but a new American ethnic identity, an American people that needs to restore its sovereign homeland.