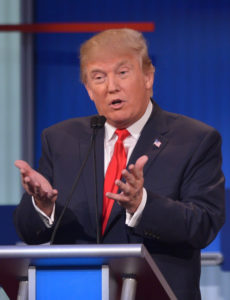 As I left the Forum on Saturday, I walked away feeling invigorated, hopeful, and for the very first time in my short life as a White Nationalist, confident for the future of our movement, but more importantly, in the future of our race. The most common perspective held by many young White Nationalists, myself included, is usually one of doom and gloom. As you all may very well know, we have little to celebrate. Our nations, our communities, our culture, and identity are under full attack. These threats to our existence come on all fronts — both foreign and domestic — and they have placed the White race on the endangered species list. Those of us who know what is at stake have taken-up metaphorical arms against the liberal establishment, countering their attack on our identity, and they are beginning to feel the effects of our efforts.

Hillary Clinton almost “collapsed into her own footprint” as she left a 9/11 remembrance ceremony. Her collapse, like the collapse of the twin towers during the 9/11 attacks, is symbolic. The fall of Hillary Clinton is a premonition of things to come.

The establishment has never heard of the New or Alternative Right, and if they did, they strategically never mentioned us in their controlled media outlets. I think we owe Hillary Clinton a bit of gratitude for mentioning the Alternative Right on her campaign website and in a speech broadcasted across the country — albeit to warn America of our sinister, racist, and deplorable ways — introducing us to millions of Trump supporters across the nation. Many of whom feel totally ostracized by their political points of view — points of view that would not be seen as ostracizing if the American government hadn’t ostracized them! I think being called “irredeemable and deplorable” is pretty ostracizing, no? But thanks to Hillary, these deplorable people now know that they are not alone.

Trump is not of the New or Alternative Right. Trump is nothing more than an American Nationalist — nationalist in the modern sense of the word — and a politically moderate candidate. All that means is Trump is willing to objectively define what is and what is not America, and who is and who is not American. Trump is not explicitly pro-white. He is pro-American, and for the all-inclusive modern liberal, that is grounds for discrimination and enough evidence to pin the label of “hate” upon his lapel. After all — as Hillary’s campaign slogan says “stronger together” — we are all in this together, right deplorables? “Stronger together” is not a presidential campaign slogan, it’s more of a war propaganda slogan to rally the masses for supporting a war — waged by the liberal establishment — against racism, sexism, islamophobia, anti-Semitism, and all other irredeemable and deplorable “ism,” that have been conveniently made synonymous with being a straight white male in America. In case you haven’t noticed, Trump is also a straight white male and the establishment hates him for all of the above-mentioned reasons.

Thanks to Hillary Clinton’s “basket of deplorables” statement, she too has objectively defined what is America, and who is American, and according to the modern liberal establishment, you — white America — are not American, and half of you are irredeemably deplorable.

White America; we are the builders, founders, and supporters of America. Your blood, sweat, and sacrifice has sustained this nation since its inception. This is our home. America only exists because of us, and we will not allow the liberal establishment to redefine what it means to be an American. This is what Trump means when he says “make America great again.”

What makes Trump so attractive to the “Alternative Right” is simple, he may not be pro-white, but he is not anti-white. This simple fact alone is enough for many of us to call ourselves Trump supporters. Obviously I am one of them. Trump is not the ideal President, he is not the President we want, but right now, he is the President we absolutely need. White America has become nothing more than a force-fed and sedated cow, whose milk is given to the very people who want to slaughter us whole. We are sedated with emotional manipulation and force-fed egalitarian rhetoric to keep the milk flowing, which is used to nourish the enemy of our people. But we are more than a docile animal, more than their beast of burden, and we are about to unleash the raging bull that lies dormant inside each and every one of us, and take back what is rightfully ours. Justice is coming, and the establishment knows this.

The Trump phenomenon, as many are calling it, is a sign that the bull is beginning to stir. The rage many white people have caged-up inside is beginning to break the surface. Evidence of this is found in the overwhelming support for Donald Trump, even with the unlimited Trump-bashing and name calling in the media. It seems as though with every character assassination attempt on Donald Trump’s political life, more people come to his defense by pledging their support.

I don’t think Trump or the liberal establishment saw any of this coming.

This took the liberal establishment by surprise, and they are frightened of what Donald Trump represents: legitimate political interests of European-Americans. Hillary, and the establishment she represents, is scared, they failed to see that their relentless anti-white media propaganda and government policies could backfire. They failed to see that labeling Trump as a man of the Alternative Right would backfire and lay the groundwork for the unification of a presumably defeated people. What was once seen as a dead, silent majority is now a reinvigorated majority speaking out for their legitimate political interests — with Trump as their voice. The dividing line between their America and the traditional, historically accurate America, will grow bolder with each passing day.

He is unapologetic, he is determined, and he is not afraid to go “all in” for what he believes must be done to “make America great again.” Trump has shown those who are paying attention, that he would not only be a bold leader but also a man willing to put his career, his financial success, his name and the reputation of his family, on the line to do what he believes is right for his country. Can you name one person — wealthy or otherwise — who is willing to risk his safe, convenient, and luxurious personal life to do anything of the sort, especially by presenting highly unpopular political policies while running for the most powerful office in America to ensure their implementation? These qualities are the mark of someone with great leadership ability, and I am willing to give Trump the chance to prove that he is worthy of the elite title and position.

With the rise of Islam in the West, Trump could not have come at a better time. He is the only candidate who speaks openly about the dangers that Islam represents to the Western world. This has also given rise to many classical liberals who are now calling themselves “Alternative Right.” People like Milo Yiannopoulos, Alex Jones, and Paul Joseph Watson of Infowars, to name a few, have all jumped on the “Alternative Right” band wagon. Their critical of Islam, but they are only critical of Islam because it poses a threat to modern Western liberal values; secularism, liberty, freedom, feminism and gay rights. These are all legitimate concerns, but we on the Alternative Right are also critical of modern Western liberal values, if you can call them that. But I guess at this point, “the enemy of my enemy is my friend” and there is no need to have an internal battle while we face much larger and more immanent concerns. If we can get libertarians to join the fight against Islam in the West, get Trump into office, with time, we can begin to call for political policies that push further to the right — or explicitly pro-white policies — with less restraint. Islam is a perfect example of what happens when you allow modern liberalism to hold hegemonic power over the Western world. Once Islam is removed, the Alternative Right must begin its tireless work of removing all forms of liberalism from the West to ensure that Islam, or any other existential threat to Western civilization, can never happen again. If we allow liberalism to keep its ugly head, the degeneration process will start all over again, it’s time to end the cycle.

With Trump’s popularity bringing him closer to the Presidential office and libertarians now claiming that they are “Alternative Right,” this is a sign that the reversal process has begun. One step at a time. It’s as if America is a broken pipe, and water is flooding the basement of your house. Before you can get the water out, you have to turn off the water, fix or replace the pipe, and only then could you effectively remove the stagnant water from the basement — water that threatens the very foundation of your home. Trump’s policies have shown that he has at least noticed the broken pipe and is pointing out that we are all standing in stagnant water. The fact that this has made him popular with the Alternative Right and classical liberals alike is proof that we are no longer denying — or allowing the establishment to create — our reality.

Hierarchy, structure, and order are fundamentally Right-wing. Like anything in life, you cannot understand calculus without first understanding algebra. There is a structure and an order to everything. This understanding of hierarchy is important when building anything, including civilization. If you want to build something that will be able to stand the test of time or a structure sound enough to support its own weight, you must start at the foundation. We have taken our first step in repairing the foundation of America, and the hegemonic liberal establishment is losing its grip.