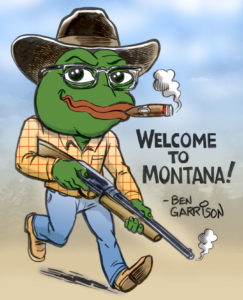 I can’t prove this with data since I’ve read very little on this from either group, but I imagine that most on the Alt Right range from neutral to wholly supportive of gun rights. On the other hand, while we know that the NRA enthusiastically endorsed candidate Donald Trump, I also have a feeling that those on the Gun Right aren’t too broken up about frog memes and people like Jared Taylor and Richard Spencer getting a lot of new attention and influence. Or, if they are, they aren’t saying much about it.

But let’s do a thought experiment to amplify this point. I think we can all agree that if candidate Trump took a gun control position as restrictive as Hillary Clinton’s, he’d be shooting his campaign in the foot. Regardless, I believe that nearly 100% of the people identifying primarily as Alt Right would still vote for him, albeit, perhaps, with reduced enthusiasm. For such people, clearly, immigration and racial matters trump guns, even if they embrace gun rights. At the same time, I believe a healthy fraction of the Gun Right would also still vote Trump, like maybe 80 to 90 per cent. They’d make a lot of noise about it beforehand, of course. But being conservatives for the most part they’d probably agree with many of Trump’s other pronouncements as well as despise Hillary for her corruption and socialistic tendencies. Further, both sides would be equally bad vis-à-vis guns, so you might as well vote for the lesser evil.

This proves for me that the Alt Right and the Gun Right are natural allies. A Venn diagram covering all possible political issues would likely show an over 90 per cent convergence. I’d be willing to bet that much of the general readership of this site and others like it would be fairly comfortable at a gun show or an NRA convention. Further, I imagine that many on the Gun Right are intrigued about the rise of the Alt Right and be willing to politely listen and engage with us over what we have to say. There may be quibbling of course (what alliance doesn’t have quibbling?). For example, some on the Alt Right are fairly open-minded about fascism, and nothing makes a Gun Right person cringe more than fascism. Some also admire Adolf Hitler who famously limited gun rights in his Firearms Act of 1937. This, of course, would be a sticking point. Gun rights activists almost always bring up Hitler as an example of how not to run a country. They often use him as a means to shame their opponents by association—a clever, if ultimately ineffectual, tactic. “You support gun control? So did Hitler! You’re just like Hitler!”

I find this Alt Right/Gun Right coexistence interesting because, well, for one, few people are talking about it. But, more importantly, it represents a unique, perhaps even historic, convergence between the ultra-modern and the ancient. The Alt Right represents the ultra-modern because never before in recorded history has there been a movement to unify the entire white race in the face of slow death in the form of non-white immigration. Ethnic identity has always been there in Europe, of course. Its history is filled with ethnic strife: Swedes against Russians, French against Prussians, Cromwell against the Irish. We know all about it. Amid our byzantine bickering over the past 500 years, some European nations have even forged alliances with non-white powers such as the Ottoman Empire despite the latter’s vast enslavement of whites and its various attempts to conquer all of Europe. Yet here we are now for the first time ever, calling for all whites to stand in phalanx against this refugee horde which is bent upon making us minorities in our own homelands. These are heady times, but these are also frightening times, since the Alt Right aspires to do what has never been done before.

The Gun Right, however, has been doing what it’s been doing since Ancient Greece. Remarkably little about it has changed. If you ask a modern gun enthusiast and NRA member why he owns guns, he would likely give you an answer very similar to one offered by a 15th-century Yorkshire tanner or a yeoman horse farmer of Ancient Rome. They would be similarly literate about it as well. If the Alt Right cares to consider itself a movement of and for white people, then it will behoove itself to recognize the Gun Right as not only primarily white but necessarily white. The very concept of a free populace bearing arms for self-defense and fending off tyranny originated in Europe. Further, nearly all of the discourse on this topic for thousands of years has transpired between whites. While weapons are, of course, universal to Man, the idea of the right to own them and the question of why we should own them is and has always been a white thing.

Aristotle carries on about it in his Politics. So did Cicero in a number of his speeches. Livy, Horace, and Ovid also weigh in. And it wasn’t as if later white thinkers had forgotten their classical pedigree. Niccolò Machiavelli, who had organized and led an armed citizen militia in early 1500s, wrote in his On the Art of War that an armed populace maintains its civic virtue by being able to resist “the changes of fortune.” He looked to ancient Greece and Rome for both information and inspiration on this topic. Hugo Grotius, Charles Montesquieu, Jean-Jacques Rousseau, and many others did as well.

And then we have the British. Under the Saxon laws landowners were obliged to keep armor and weapons according to their wealth and social rank. Later in British history, men were not just obliged but required to own arms not only for self-defense but to form militias if the need ever arose. This state of affairs remained more or less stable until the 1660s when King Charles II enacted his Militia Acts which allowed the confiscation of arms owned by citizens. This was mostly overturned in 1689 with the English Declaration of Rights. The right to arms appeared as the seventh of the thirteen basic rights outlined in that historic document. It is no coincidence that the Whigs, who were responsible for the Glorious Revolution which limited royal power and expanded Parliament’s, also limited governmental authority by keeping its hands off weapons owned by citizens.

It is from this and the voluminous commentary surrounding it that the American Founding Fathers derived the Second Amendment.

Regardless of our personal opinions on guns, the Gun Right, with its talk on an armed society being a prerequisite for a free society and a bulwark against tyranny, has a point. In all the scholarship on the right to bear arms, you will see terms such as “liberty,” “freedom,” “valor,” “virtue,” and “self-defense” pop up a lot. These are the things the Gun Right really cares about, much more than race. And even if one places race on a higher level of importance, I think we can all agree that these are still good things to care about.

A great example, which will hopefully resonate with the Counter-Currents readership, is that of the Holodomor, the Terror-Famine inflicted upon the Ukraine in the early 1930s by Stalin and the Soviet leadership in Moscow. According to Robert Conquest in his meat grinder of a history entitled The Harvest of Sorrow [2], which I recommend to everyone, 14.5 million souls perished either through deliberate and government-sanctioned mass-starvation, or through the vicious process of ‘dekulakization’ through which millions of kulaks (a subjective term describing a wealthy peasant) were either executed or deported to gulags. Of course, Stalin made sure to disarm the Ukrainians before moving on them. According to Conquest:

In 1929-30 a great effort had been made to prevent the peasantry possessing arms. Registration of hunting weapons had become compulsory in decrees of 1926, 1928 and 1929, and rules were also established to ensure that ‘criminal and socially dangerous elements’ should not be sold guns, this to be ‘checked by the GPU authorities’. In August 1930, when various minor insurrections and individual acts of resistance had made it clear that this was not being obeyed, a massive arms search was ordered. By this time, however, few arms were left. Among the hundreds of search documents we ﬁnd only the occasional discovery of ‘one small-bore pistol’ while the search was turned to the state’s advantage by the seizure of ‘silver money 30 roubles 75 kopeks; paper money 105 roubles; wedding rings-two’ and so on in case after case.

The peasants tried to resist, but without arms they were powerless when government forces or the Red Army came to confiscate grain or commit other evils. Their choices in many cases were limited to being mowed down by machine gun fire or starving to death in their own wretched huts. If they were lucky, they’d be sentenced to twelve years hard labor in a camp north of the Arctic Circle.

This is what a disarmed populace could potentially lead to. This is also what keeps the Gun Right up at night every time politicians in Washington try to limit their right to bear arms.

I think that as non-whites continue to crowd our borders and alter the demographics of the United States, the Gun Right will eventually see the wisdom in race realism. If they’re worried about tyranny now, wait until the Mexicans, the blacks, the Muslims, and other non-whites have real political power in this country by virtue of being a majority. If history and current events are any indication, these are not people who give a fig about concepts such as “liberty,” “virtue,” and “self-defense.” If confiscating firearms is what it takes to consolidate their power, they will confiscate firearms. And they will be especially motivated to do so if you’re a gringo, a cracker, or an infidel. These people, you see, are anti-white racists. They are racial chauvinists who are more or less allied in their struggle against whitey. And as their numbers increase, so will their chauvinism. This is something that the Alt Right understands better than anyone including the Gun Right.

I predict that the peaceful coexistence enjoyed by the Alt Right and the Gun Right today will be forged by necessity into a fearsome political and (God help us) military alliance tomorrow. When whites get shoved into a corner and will have to start shoving back, there is no one I’d rather have on my side than some of these liberty-loving, firearm-savvy gun rights guys who know how to dislodge a cartridge from the chamber of my 9mm semi-automatic handgun after a hang fire. If we can get along when it matters most, we’ll have a hell of a chance of achieving that white ethnostate after all.

But this happy ending comes with a caveat. While the Gun Right aspires to influence government, the Alt Right aspires one day to be government. That is a huge distinction from which our minds should never wander. There will be a cost attached to this alliance, and the Alt Right (or whoever its inheritors are after the great White Nationalism struggle has been won) should be prepared to pay it. They should let the Gun Right keep their firearms, and they should leave them alone.